A global network of "biohybrid" jellyfish could help us explore the Earth's oceans. 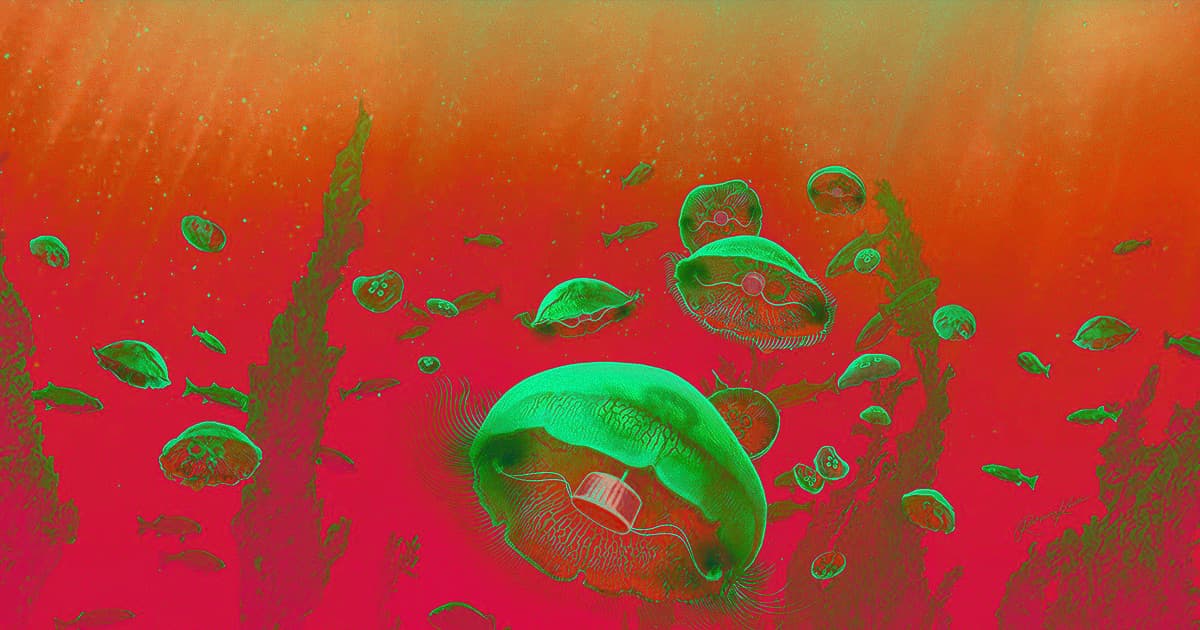 A team of Stanford and Caltech scientists attached low-power microelectronics to the undersides of jellyfish to create "biohybrid robots" that swim three times as fast as normal ones.

The idea is to one day allow "cyborg jellyfish," equipped with sensors, to explore the vast depths of our planet's oceans — rather than relying on unwieldy and inefficient submarines, Scientific American reports.

In a trial, the scientists were capable of using electrical jolts from microelectronic controllers to make jellyfish swim not only faster but also more efficiently, according to a paper published in Science Advances today.

"We've shown that they're capable of moving much faster than they normally do, without an undue cost on their metabolism," said co-author and Stanford bioengineering PhD candidate Nicole Xu, in a statement.

"This reveals that jellyfish possess an untapped ability for faster, more efficient swimming," Xu added. "They just don't usually have a reason to do so."

Thanks to the simplicity of the design, the electronics use orders of magnitude less external power per mass than other aquatic robots, according to the paper.

The jellyfish cyborgs could revolutionize the way we explore the mysteries of the planet's oceans. To do that, the researchers are already looking to take their project a step further by adding controls, using only a few modifications to the microelectronics.

"If we can find a way to direct these jellyfish and also equip them with sensors to track things like ocean temperature, salinity, oxygen levels, and so on, we could create a truly global ocean network where each of the jellyfish robots costs a few dollars to instrument and feeds themselves energy from prey already in the ocean," said lead author and Caltech mechanical engineer John Dabiri.

Read This Next
Unholy Diver
Terrifying Humanoid Diving Robot With "Human" Sense of Touch Explores Shipwreck
More on Robots & Machines
Blow Up Doll
Monday on the byte
Ukraine Accuses Russia of Using Inflatable "Dummy Tanks," Which Deflated
From the Dept. of...
Monday on futurism
The Best UPS Battery Backups of 2023
FROM THE DEPT. OF...
Jan 29 on futurism
The Best Netgear Routers of 2023
READ MORE STORIES ABOUT / Robots & Machines
Keep up.
Subscribe to our daily newsletter to keep in touch with the subjects shaping our future.
+Social+Newsletter
TopicsAbout UsContact Us
Copyright ©, Camden Media Inc All Rights Reserved. See our User Agreement, Privacy Policy and Data Use Policy. The material on this site may not be reproduced, distributed, transmitted, cached or otherwise used, except with prior written permission of Futurism. Articles may contain affiliate links which enable us to share in the revenue of any purchases made.
Fonts by Typekit and Monotype.