It's excellent at exploring underwater worlds — and invading your nightmares. 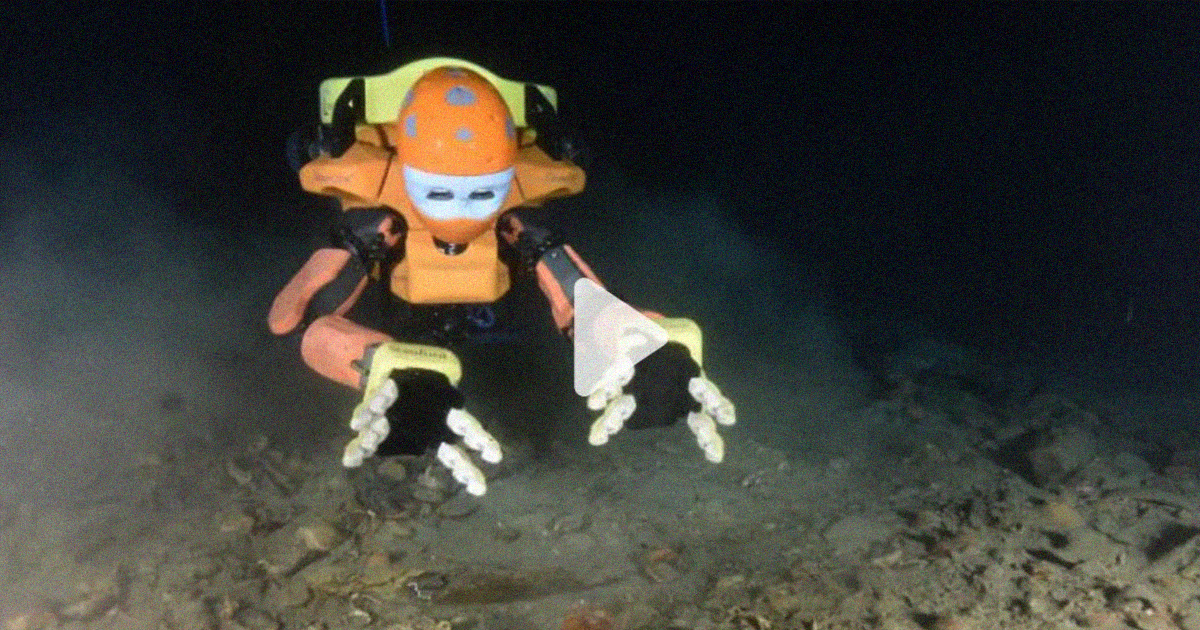 How do you explore the sunken depths of the ocean where it’s unsafe for human divers to venture? By building a creepy looking robot guy with a "human" sense of touch, of course.

And that’s just one of many, having explored everything from sunken submarines to airplane wrecks, as CNN reported over the weekend.

At only five feet long, the feature-packed guy is amazingly capable — despite its terrifying appearance.

Built to resemble a human diver, OceanOneK has remotely controllable arms and hands, eyes capable of 3D vision, and a haptic feedback system that lets the operator safely feel the pressure and resistance of the water — and even objects.

"You are moving very close to this amazing structure, and something incredible happens when you touch it: You actually feel it," said Oussama Khatib, director of the Stanford Robotics Lab, in a press release, describing his experience using the robot to explore a sunken steamship.

Incredibly, the robot’s AI brain can intuit the force necessary to interact with objects without damaging them — which is extremely important if you want to use OceanOneK to recover rare artifacts.

At depths human divers could only dream of, OceanOneK remains incredibly resilient, and has been demonstrated to withstand pressure levels at nearly 3,280 feet below the surface.

Still, like any robot, OceanOneK has its fair share of maintenance problems, including disabled arms and failing to resurface properly.

But scientists have always managed to get the robot up and running again.

OceanOneK debuted in 2016 with its exploration of King Louis XIV’s sunken ship, and its team has been working on improvements ever since. Recently, the robot placed a camera inside a wrecked steamship and retrieved artifacts from the watery grave of an ancient Roman vessel.

The talented diver may even have an upcoming successor set for space. Khatib told CNN that the European Space Agency has expressed interest.

"They can interact with the robot deep in the water," Khatib added, "and this would be amazing because this would simulate the task of doing this on a different planet or different moon."

Read This Next
Thanks, but No Thanks
Oakland Police Want to Arm Robots With Shotguns, Because We Live in a Dystopian Nightmare
Cyborg Jellies
Scientists Want to Explore Ocean With "Cyborg Jellyfish"
Cop Bots
India Just Swore in Its First Robot Police Officer
Futurism
The 'Hexbot' Transforms Your Desk Into a 3D Printer and High-Tech Assembly Line
Animatronic Hospitality
Japan's Robot Hotel Just Laid Off Half Its Robots
More on Robots & Machines
From the Dept. of...
12:00 AM on futurism
The Best Wireless Mouse of 2023
Balloon Boy
Yesterday on the byte
Other Chinese Balloons Apparently Flew Over America, But Nobody Noticed Them
From the Dept. of...
Yesterday on futurism
The Best Earbuds Under $50 in 2023
READ MORE STORIES ABOUT / Robots & Machines
Keep up.
Subscribe to our daily newsletter to keep in touch with the subjects shaping our future.
+Social+Newsletter
TopicsAbout UsContact Us
Copyright ©, Camden Media Inc All Rights Reserved. See our User Agreement, Privacy Policy and Data Use Policy. The material on this site may not be reproduced, distributed, transmitted, cached or otherwise used, except with prior written permission of Futurism. Articles may contain affiliate links which enable us to share in the revenue of any purchases made.
Fonts by Typekit and Monotype.