“I know mathematics well but I also want to learn to draw,” it said in an oddly human tone. 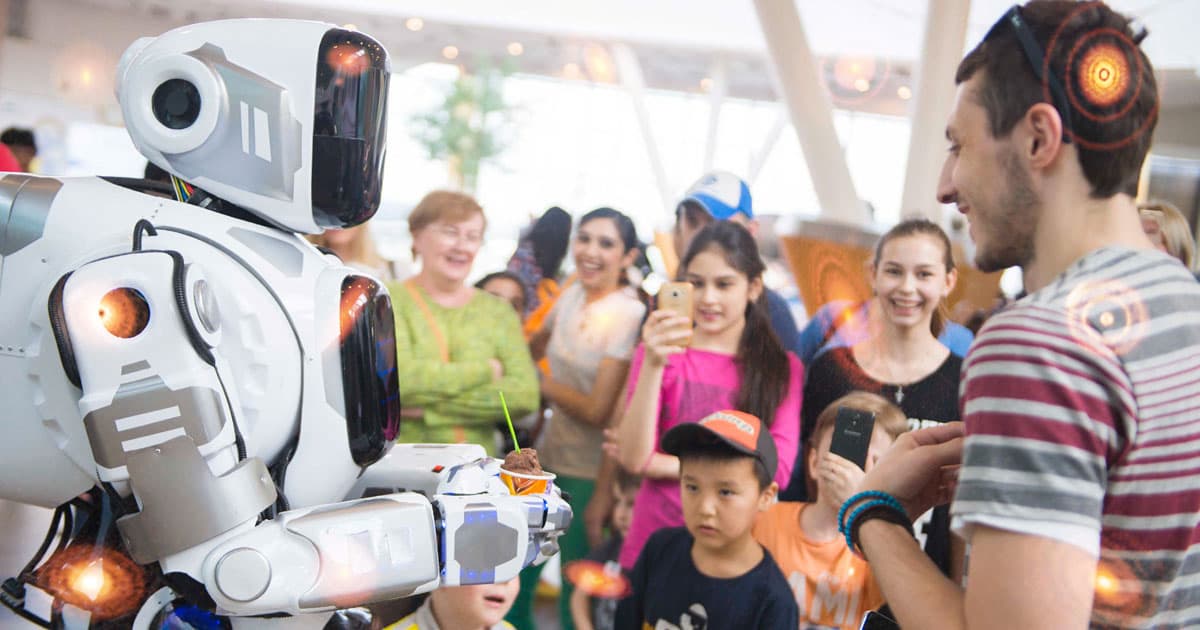 Not all is what it seems on Russian TV.

Government-owned TV station Russia-24 showed off a humanoid robot called "Robot Boris" on stage at a youth forum about the future of robotics.

"I know mathematics well but I also want to learn to draw," it yelled out to the crowd in an oddly human tone, as quoted by The Guardian.

The robot could also be seen dancing alongside two hired dancers. Its movements seemed suspiciously fluid and life-like. And why does it have a flesh-colored neck?

A Russian blog called TJournal posed some serious questions about the broadcast. Where are the robot's sensors? Why have we never heard of this robot before? Why is the robot dancing so clumsily? Why does it sound like a human being doing a terrible impression of a robot?

And yes, they were right. People caught on to the ruse pretty quickly — including The Guardian.

The "hi-tech robot" turned out to be "Alyosha the Robot" — a man in a suit, put together by a company called Show Robots — and yes, that's the real name of the company. It even turns out that you can buy your own robot suit from them for a cool 250,000 roubles (just shy of $3,800).

After the event, organizers denied that they ever tried to pass off the robot as real, The Guardian reports. But the Russia-24 broadcast never made it clear the robot was a costume.

The future will probably be filled with impressive robots. But this wasn't one of them. Even if all attendees and organizers knew the robot was a man in a suit all along, what was he doing at at an event that was meant to inspire the Russian youth?

Even a more rudimentary (and real) robot would have been far more suitable.

READ MORE: Robot turns out to be man in suit [BBC]

Read This Next
Diner Drama
People Furious at Robot Serving Pancakes at Denny's
Robot Violence
YouTube Accidentally Removed Robot Battle Videos for "Animal Cruelty"
Buzz Off
Tiny Spies: This Insect-Like Flying Robot is Smaller Than a Penny
Typical Day In Russia
Watch Russia's New Shotgun-Wielding Drone in Action
Automating Gym Class
Toyota's Basketball Robot Can Nail Three-Pointers
More on Robots & Machines
FROM THE DEPT. OF...
Thursday on futurism
Best Charging Stations in 2022
FROM THE DEPT. OF...
Wednesday on futurism
Best Vintage Turntables in 2022
FROM THE DEPT. OF...
Wednesday on futurism
Best Gaming Chairs Under $100
READ MORE STORIES ABOUT / Robots & Machines
Keep up.
Subscribe to our daily newsletter to keep in touch with the subjects shaping our future.
+Social+Newsletter
TopicsAbout UsContact Us
Copyright ©, Camden Media Inc All Rights Reserved. See our User Agreement, Privacy Policy and Data Use Policy. The material on this site may not be reproduced, distributed, transmitted, cached or otherwise used, except with prior written permission of Futurism. Fonts by Typekit and Monotype.