Oakland Police Want to Arm Robots With Shotguns, Because We Live in a Dystopian Nightmare 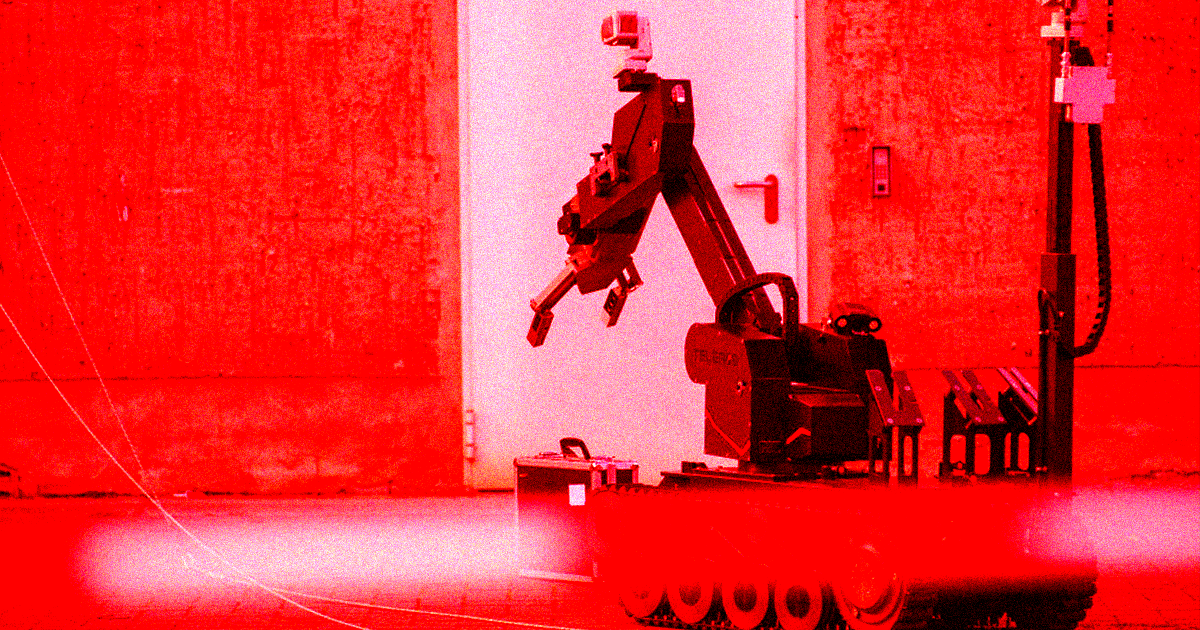 Police in Oakland are hoping to arm robots with potentially lethal shotgun-like attachments. Why? Because that's the reality we live in now.

As The Intercept reports, the Oakland police force made a "percussion actuated nonelectric disruptor," or PAN disruptor, a top-priority item on their wish list last year.

In short, PAN is a shotgun-shaped accessory attachment for wheeled robots, which are often deployed in war zones and by bomb squads.

It can be loaded with explosive forces ranging from blanks and pressurized water to live rounds — a worrying new development in the use of potentially lethal machinery by police forces across the country.

"One can imagine applications of this particular tool that may seem reasonable," Liz O'Sullivan, CEO of the AI bias-auditing startup Parity and a member of the International Committee for Robot Arms Control, told the Intercept, "but with a very few modifications, or even just different kinds of ammunition, these tools can easily be weaponized against democratic dissent."

When asked during a 2021 subcommittee meeting if they planned to ever put live ammunition into the machine, the Oakland police department originally said no.

But when drafting up rules for using the attachment, the department had a change of tune.

"I don't want to add a prohibited use," lieutenant Omar Daza-Quiroz, who represented the department at the meeting, reportedly told the committee, "because what if we need it for some situation later on?"

Weeks of back-and-forth reportedly followed, with the Oakland PD promising to only use the literal killing machines when deemed necessary, during "certain catastrophic, high-risk, high-threat, mass casualty events."

One problem, though: there's no written, lawful definition as to what those specific terms would entail, ultimately leaving things very much up to the police department for interpretation.

To be clear: the subcommittee appears to have won out, but only to a degree, agreeing on language that bans their use to kill humans — which isn't exactly confidence inducing.

The police force is, however, allowed to arm the devices with pepper spray.

"We will not be arming robots with lethal rounds anytime soon," Daza-Quiroz told the Intercept, "If and when that time comes each event will be assessed prior to such deployment."

Whether the Oakland police's amended policy will be approved by Oakland's City Council remains to be seen. But as the Oakland PD isn't the only department in the country to push for the adoption of PAN, it's likely that we'll see more of the same across the country — and there's no telling what might happen in each individual case.

Read This Next
Unholy Diver
Terrifying Humanoid Diving Robot With "Human" Sense of Touch Explores Shipwreck
Cop Bots
India Just Swore in Its First Robot Police Officer
Futurism
The 'Hexbot' Transforms Your Desk Into a 3D Printer and High-Tech Assembly Line
Animatronic Hospitality
Japan's Robot Hotel Just Laid Off Half Its Robots
Man in a Bot
Russian TV Tried to Pass a Man in a Suit off as A High Tech Robot
More on Robots & Machines
No Ethics
5:54 PM on the byte
San Francisco Cops Now Allowed to Use Robots to Kill People
FROM THE DEPT. OF...
Monday on futurism
The Best Over-Ear Headphones of 2022
FROM THE DEPT. OF...
Monday on futurism
The Best Studio Headphones of 2022
READ MORE STORIES ABOUT / Robots & Machines
Keep up.
Subscribe to our daily newsletter to keep in touch with the subjects shaping our future.
+Social+Newsletter
TopicsAbout UsContact Us
Copyright ©, Camden Media Inc All Rights Reserved. See our User Agreement, Privacy Policy and Data Use Policy. The material on this site may not be reproduced, distributed, transmitted, cached or otherwise used, except with prior written permission of Futurism. Articles may contain affiliate links which enable us to share in the revenue of any purchases made.
Fonts by Typekit and Monotype.