Japan's Robot Hotel Just Laid Off Half Its Robots

Automation? In this economy? 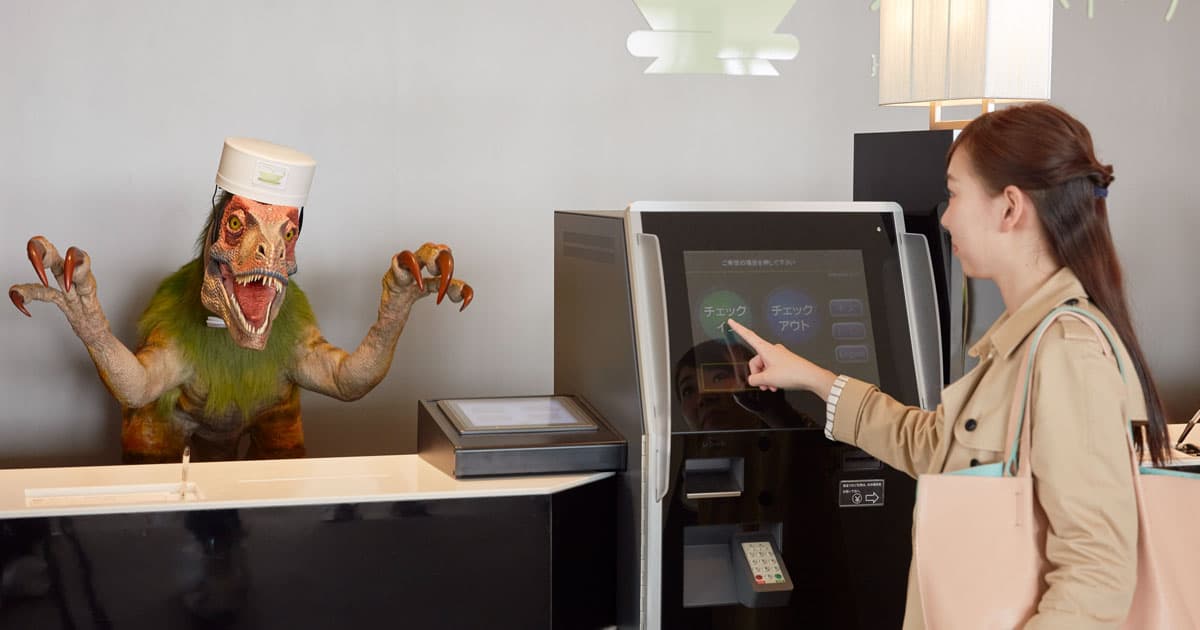 Japan's iconic Henn-na — literally "Strange" ­— hotel has decommissioned half of the 243 robots it once used to handle everyday operations.

Since opening in 2015, the hotel has raised publicity by "employing" hundreds of bizarre robots that ranged from bizarre-but-helpful-I-guess to downright annoying, according to The Wall Street Journal. The robot helpers made for a fun gimmick, but weren't quite ready for the big leagues — a blow not just to dreams of an automated world, but to Japan's pop-culture image as a leader in the space.

Some of the problems stem from creative ideas that didn't pan out, like a robot velociraptor that staffed the check-in desk. Others came from an inability to keep up with the breakneck pace of assistive technology, like how Churi, the personal assistant robot found in each room, could handle basic tasks but pales in comparison to the personal assistant that comes standard with any new smartphone.

In case after case, these robots proved too annoying or broke down too often to be worth the trouble, according to the WSJ. The velociraptor couldn't handle foreign guests, for instance; human employees had to come over to photocopy their passports.

Churi could change a room's temperature and respond to basic small talk, but couldn't answer any questions about the area or other attractions. Meawhile, Henn-na Hotel's management was so confident in the robots' abilities that they didn't equip rooms with phones. Later on, management made up for Churi's limitations with the cutting-edge solution of placing a human employee at the front desk to answer questions.

Meanwhile, Churi would reportedly wake up guests again and again after mistaking their snoring for a question that the robot couldn't quite understand.

So what if Henn-na Hotel's robotic luggage shuttles get in each other's way and can only access about a quarter of the hotel's rooms without breaking down? The ubiquitous presence of these robots, even the immobilized bot who forever sits at the piano without ever playing a note, gives the hotel a retro-futuristic vibe, sort of like how the Jetsons had an autonomous robot maid but still gathered around a tiny television set.

In the future, Henn-na Hotel plans to adopt robotic technology that's more similar to the advances we see elsewhere, like facial recognition door locks, the WSJ reports. It won't be as charming, but it should work a little bit better.

More on robotic limitations: You Have No Idea What Artificial Intelligence Really Does

Read This Next
Thanks, but No Thanks
Oakland Police Want to Arm Robots With Shotguns, Because We Live in a Dystopian Nightmare
Unholy Diver
Terrifying Humanoid Diving Robot With "Human" Sense of Touch Explores Shipwreck
Diner Drama
People Furious at Robot Serving Pancakes at Denny's
Mini-Brain in the Cell Membrane
This Startup's Computer Chips Are Powered by Human Neurons
Robot Violence
YouTube Accidentally Removed Robot Battle Videos for "Animal Cruelty"
More on Robots & Machines
Blow Up Doll
Yesterday on the byte
Ukraine Accuses Russia of Using Inflatable "Dummy Tanks," Which Deflated
From the Dept. of...
Yesterday on futurism
The Best UPS Battery Backups of 2023
FROM THE DEPT. OF...
Jan 29 on futurism
The Best Netgear Routers of 2023
READ MORE STORIES ABOUT / Robots & Machines
Keep up.
Subscribe to our daily newsletter to keep in touch with the subjects shaping our future.
+Social+Newsletter
TopicsAbout UsContact Us
Copyright ©, Camden Media Inc All Rights Reserved. See our User Agreement, Privacy Policy and Data Use Policy. The material on this site may not be reproduced, distributed, transmitted, cached or otherwise used, except with prior written permission of Futurism. Articles may contain affiliate links which enable us to share in the revenue of any purchases made.
Fonts by Typekit and Monotype.