Walmart Is Testing a Robot to Replace Its Fry Cooks

The retailer wants to automate how its delis fry foods. 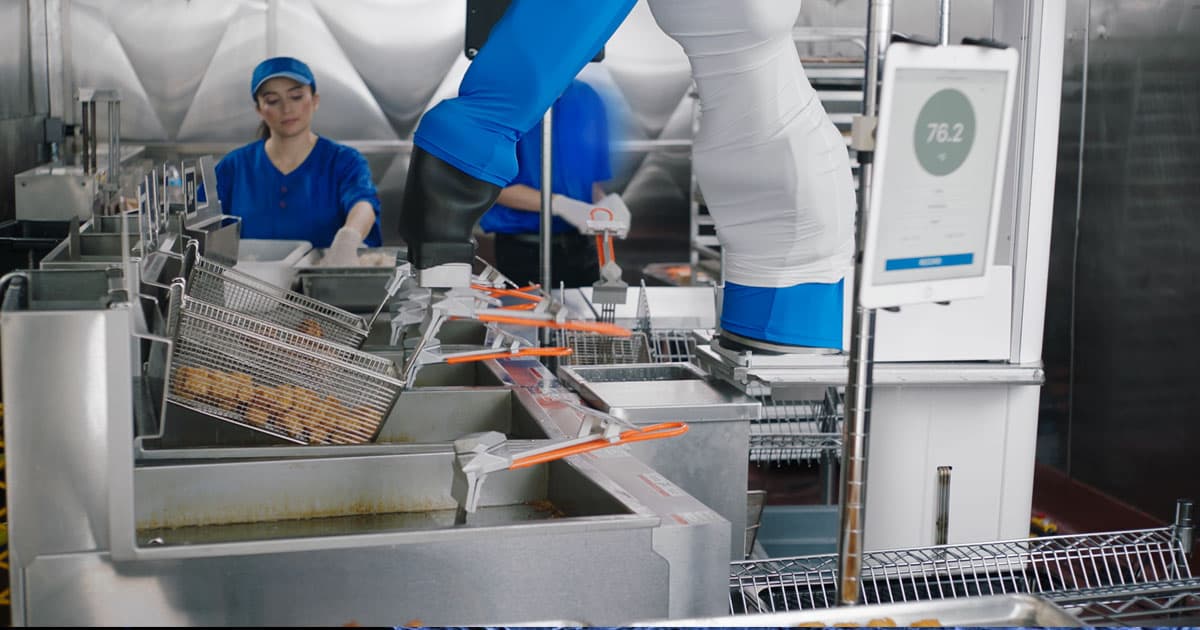 A robot named Flippy could soon join the largest workforce in the U.S.

If those tests go well, Flippy could eventually automate the frying process at Walmart delis — meaning a robot could soon be cooking your chicken tenders and potato wedges.

Flippy is the work of Pasadena-based startup Miso Robotics. It uses a combination of artificial intelligence, a 6-axis robotic arm, sensors, and cameras to complete a number of kitchen tasks, everything from flipping burgers to frying various foods.

Walmart thinks the bot could potentially work behind the counter at its delis. It envisions a human employee filling fry baskets with food and placing those baskets on racks. Flippy would then identify the food in a basket and place it in the hot oil, shaking the basket to ensure the food cooked evenly.

Once the food was cooked, the robot would then move the basket to a drip rack where an employee could check its internal temperature.

This isn't the first example of Walmart using a robot to automate tasks it considers unworthy of employees' time. In August, the company began testing robotic carts that fill customers' online orders, and it's currently in the process of rolling out 360 robot janitors capable of cleaning store floors.

As was the case with those initiatives, Flippy isn't supposed to cost any human employees their jobs — though that's probably debatable.

"Our whole thing is not about job replacement," Miso Robotics CEO David Zito told Yahoo Finance, adding that the company's goal is to "assist the hardworking linemen cooks and chefs in America with tools to give them the ability to faithfully reproduce while taking the burden off some of these more repetitive and mundane tasks."

Even if Flippy doesn't replace any employees, the bot does have the potential to save Walmart at least a little money, though — after all, unlike human workers, the robot would never help itself to a chicken tender or two while behind the fryer.

More about Flippy: Your Next Burger Could Be Grilled by This Robot Chef

Read This Next
Thanks, but No Thanks
Oakland Police Want to Arm Robots With Shotguns, Because We Live in a Dystopian Nightmare
Unholy Diver
Terrifying Humanoid Diving Robot With "Human" Sense of Touch Explores Shipwreck
Cop Bots
India Just Swore in Its First Robot Police Officer
Futurism
The 'Hexbot' Transforms Your Desk Into a 3D Printer and High-Tech Assembly Line
Animatronic Hospitality
Japan's Robot Hotel Just Laid Off Half Its Robots
More on Robots & Machines
Blow Up Doll
Yesterday on the byte
Ukraine Accuses Russia of Using Inflatable "Dummy Tanks," Which Deflated
Robot Arm News
Jan 29 on the byte
European Space Agency Shows Off Concept for Martian Sample Picker-Upper
From the Dept. of...
Jan 29 on futurism
The Best Desk Lamps of 2023
READ MORE STORIES ABOUT / Robots & Machines
Keep up.
Subscribe to our daily newsletter to keep in touch with the subjects shaping our future.
+Social+Newsletter
TopicsAbout UsContact Us
Copyright ©, Camden Media Inc All Rights Reserved. See our User Agreement, Privacy Policy and Data Use Policy. The material on this site may not be reproduced, distributed, transmitted, cached or otherwise used, except with prior written permission of Futurism. Articles may contain affiliate links which enable us to share in the revenue of any purchases made.
Fonts by Typekit and Monotype.