Walmart Is About to Deploy Hundreds of Robot Janitors

The bots will scrub floors without human supervision. 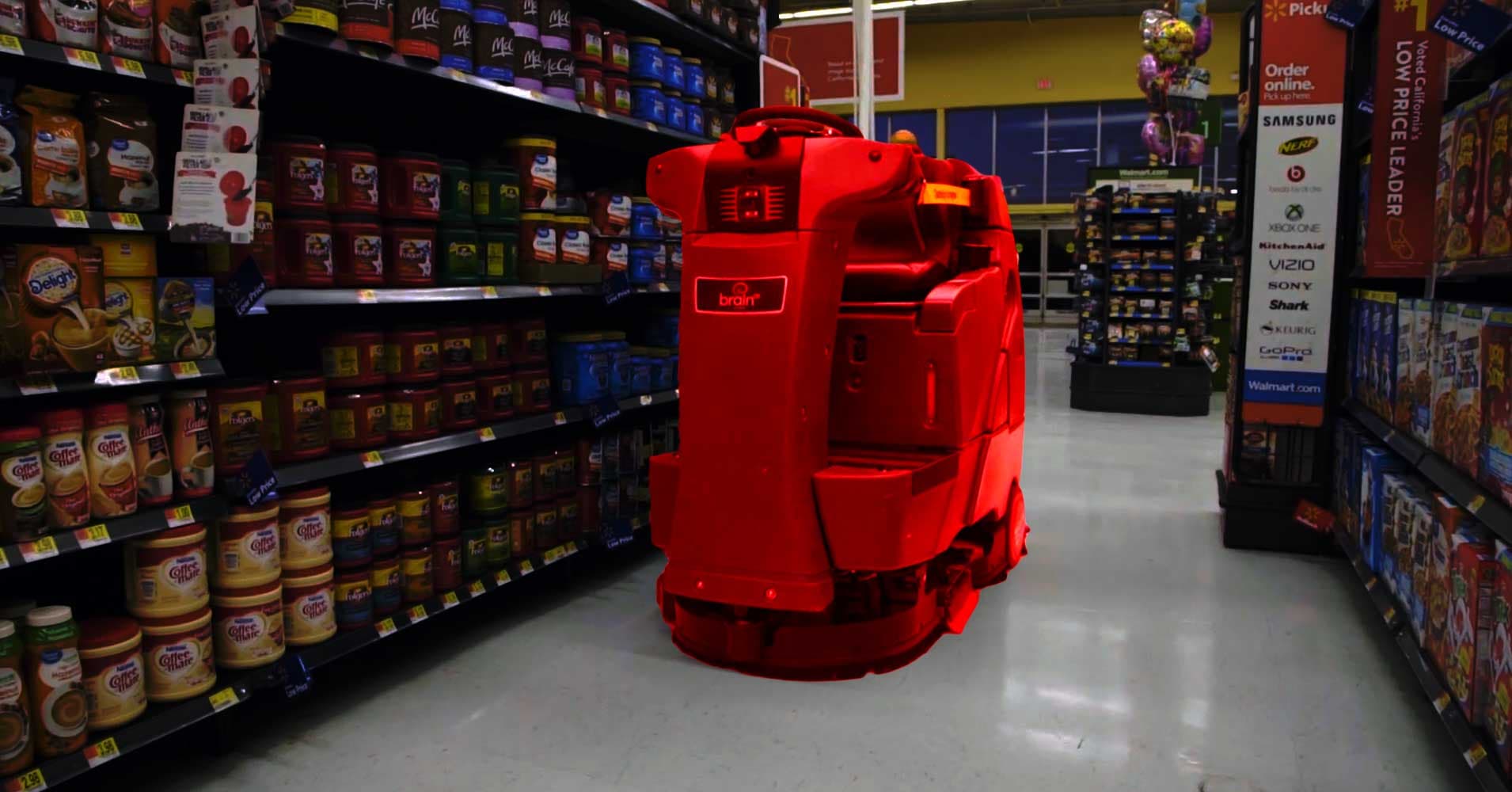 Robot janitors could be coming to a Walmart near you.

On Monday, a robotics company called Brain Corp — seriously — announced it had entered a partnership with the big box chain. By the end of January 2019, the tech company will equip 360 of the retailer's floor scrubbing machines with a platform called BrainOS. If all goes according to plan, the machines will keep the store's floors spotless — without the supervision of a human employee.

Typically, Walmart workers must manually operate the company's floor scrubbers, guiding them down the various aisles every time a store needs cleaned.

But according to a Brain Corp press release, a Walmart employee will simply need to ride each BrainOS-equipped floor scrubber around the store once to map the building's layout. After that, the scrubber will be able to navigate the store autonomously, using a system of sensors to keep an eye out for people and obstacles.

The goal, according to Walmart, is to free employees of the tedious task of cleaning floors so they can focus on other parts of their jobs, such as helping customers.

If that is the case — and these robot janitors don't actually cost any workers their jobs — they could improve the Walmart experience for both customers and employees.

But there's also a chance that the collaboration could be a stepping stone along the path to robots that can do all the tasks of a Walmart worker. And given that Walmart employs more Americans than any other company, it's hard to overstate the impact that could potentially have on the economy.

READ MORE: Robot Janitors Are Coming to Mop Floors at a Walmart Near You [Bloomberg]

More on Walmart: Walmart Wants to Use AI to Track Everything Happening in Its Stores

Read This Next
No Scrubs
This Grouchy Employee Hates Walmart's New Floor-Scrubbing Robots
Tech Support
Walmart Wants to Use AI to Track Everything Happening in Its Stores
More on Artificial Intelligence
Naughty Botty
7:10 PM on futurism
Amazing "Jailbreak" Bypasses ChatGPT's Ethics Safeguards
Immortality Lite
5:46 PM on futurism
Metaverse CEO Says ChatGPT Is Speeding Up Timeline for Emulating Dead People
Year of Efficiency
Yesterday on the byte
Zuckerberg Says Facebook Will Lean Hard Into AI
READ MORE STORIES ABOUT / Artificial Intelligence
Keep up.
Subscribe to our daily newsletter to keep in touch with the subjects shaping our future.
+Social+Newsletter
TopicsAbout UsContact Us
Copyright ©, Camden Media Inc All Rights Reserved. See our User Agreement, Privacy Policy and Data Use Policy. The material on this site may not be reproduced, distributed, transmitted, cached or otherwise used, except with prior written permission of Futurism. Articles may contain affiliate links which enable us to share in the revenue of any purchases made.
Fonts by Typekit and Monotype.