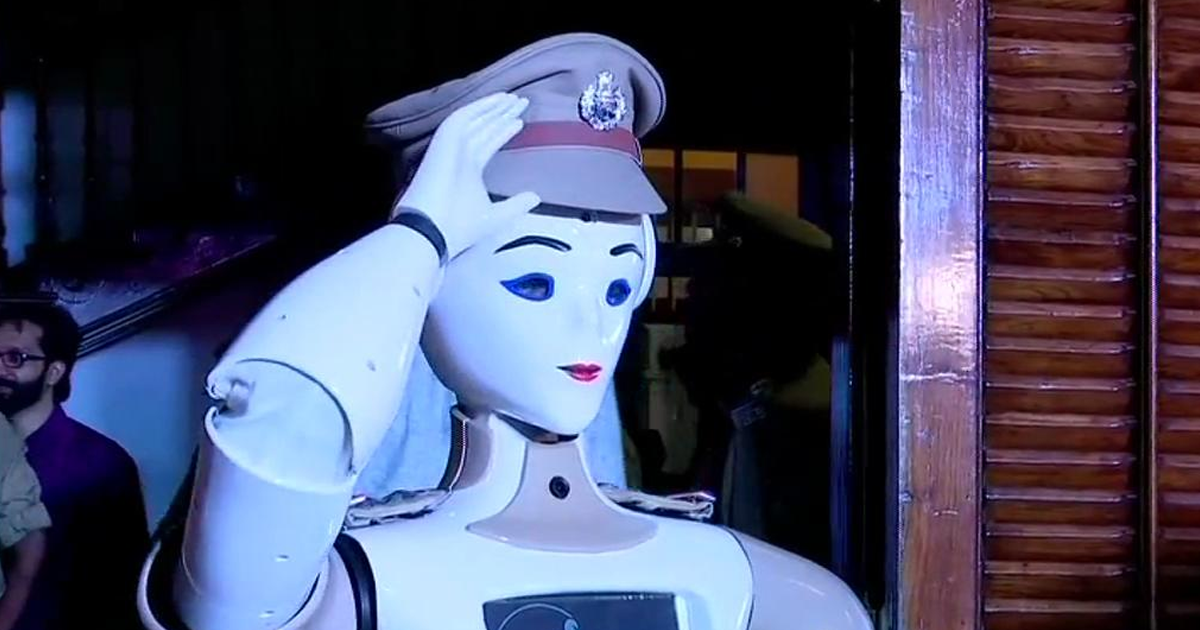 India just swore in its first robotic police officer, which is named KP-Bot.

The animatronic-looking machine was granted the rank of sub-inspector on Tuesday, and it will operate the front desk of Thiruvananthapuram police headquarters, according to India Today.

The robot was welcomed aboard with a salute from Pinarayi Vijayan, the Chief Minister of Kerala. India Today reports that the robot "responded with a perfect salute," which presumably just means that it didn't karate chop its own head off in the process.

Aside from the symbolic gesture of integrating robotics into the police force, KP-Bot doesn't do much. At the moment, it can sit behind a police station's front desk, recording complaints and directing visitors to the correct department as needed.

It can also salute at higher-ranked officers, according to India Today. In the future, it may be integrated with facial recognition software or the capability to detect bombs.

KP-Bot is also for some reason gendered, with Assistant Deputy of police Manoj Abraham explicitly declaring that the inanimate object is a woman.

"Women empowerment and gender equality were kept in mind while deciding on the gender of the first robot," said Loknath Behra, the Director General of Police. "Also, the fact that most front office jobs are managed by women was considered."

More on police robots: Dubai Wants Robots to Make up 25% of Its Police Force by 2030

Read This Next
Diner Drama
People Furious at Robot Serving Pancakes at Denny's
Robot Violence
YouTube Accidentally Removed Robot Battle Videos for "Animal Cruelty"
Buzz Off
Tiny Spies: This Insect-Like Flying Robot is Smaller Than a Penny
Automating Gym Class
Toyota's Basketball Robot Can Nail Three-Pointers
Guardian Exoskeleton
The U.S. Military is Buying a Brutal-Looking Powered Exoskeleton
More on Robots & Machines
FROM THE DEPT. OF...
Jun 30 on futurism
Best Charging Stations in 2022
FROM THE DEPT. OF...
Jun 29 on futurism
Best Vintage Turntables in 2022
FROM THE DEPT. OF...
Jun 29 on futurism
Best Gaming Chairs Under $100
READ MORE STORIES ABOUT / Robots & Machines
Keep up.
Subscribe to our daily newsletter to keep in touch with the subjects shaping our future.
+Social+Newsletter
TopicsAbout UsContact Us
Copyright ©, Camden Media Inc All Rights Reserved. See our User Agreement, Privacy Policy and Data Use Policy. The material on this site may not be reproduced, distributed, transmitted, cached or otherwise used, except with prior written permission of Futurism. Fonts by Typekit and Monotype.