Build Your Own Camera: Modular System Lets You Transform Your Camera in a Snap 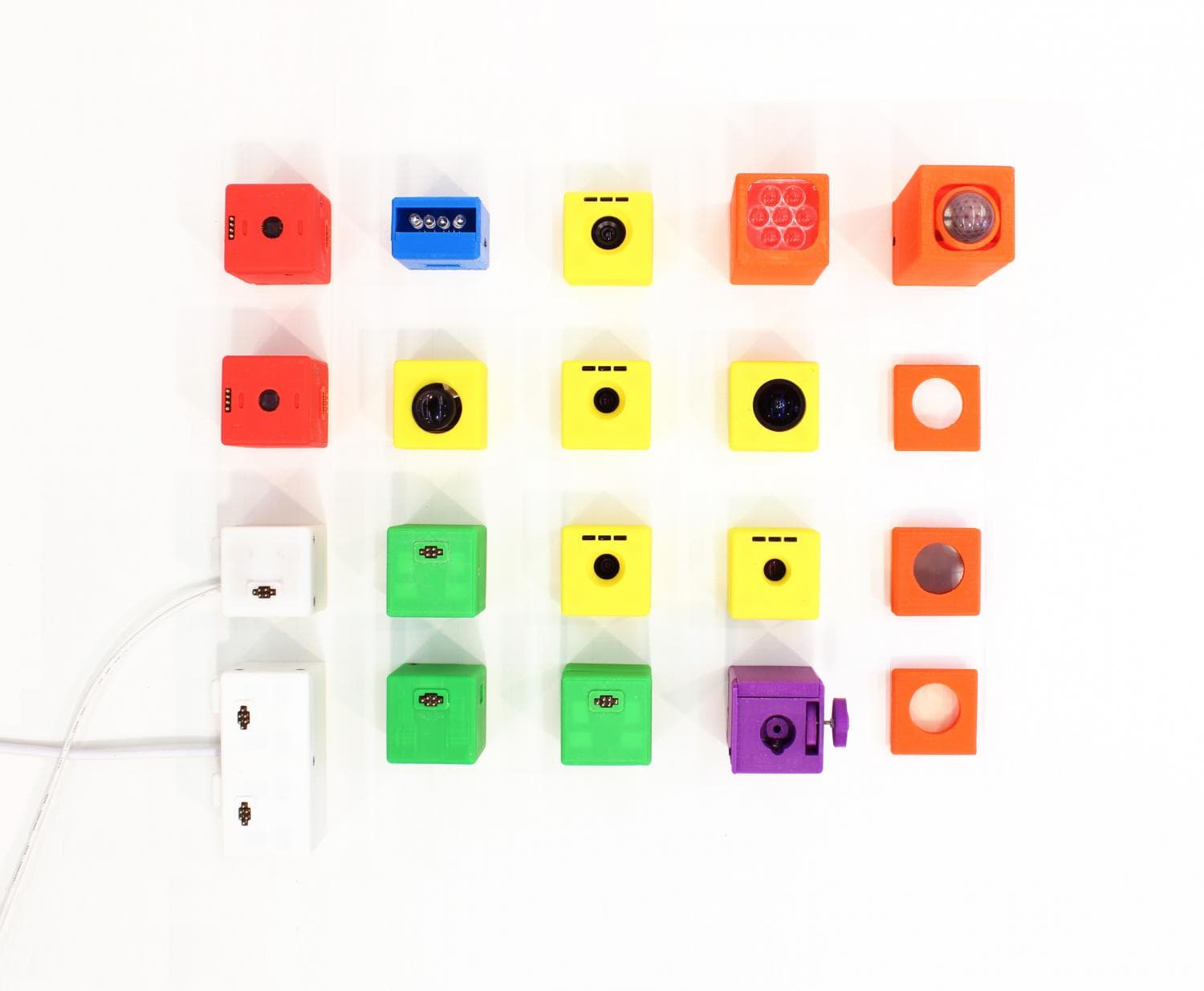 A new modular imaging system has been developed by Computer Science Professor Shree Nayar and Makoto Odamaki, a visiting scientist from Ricoh Corporation. Their invention is called "cambits," which enables the user to create a wide range of computational cameras.

Cambits are shown in the picture below to look like a child's toy. It consists of brightly colored plastic blocks which has five different types: sensors, light sources, actuators, lenses, and optical attachments. Just like using building blocks for kids, these cambits can be assembled easily to build a camera with different functionalities, depending on the user's preference.

"We wanted to redefine what we mean by a camera," says Nayar, who is the T.C. Chang Professor of Computer Science at Columbia Engineering and a pioneer in the field of computational imaging.

"Traditional cameras are really like black boxes that take one type of image. We wanted to rethink the instrument, to come up with a hardware and software system that is modular, reconfigurable, and able to capture all kinds of images. We see Cambits as a wonderful way to unleash the creativity in all of us."

The exteriors of the cambit's blocks were 3D printed. They are also amazingly easy to put together.

Each block has magnets, so there is no need for wires or screws. Once the blocks are placed together, they are electrically connected by spring-loaded pins. These pins carry the power from devices such as a computer, tablet or smartphone, as well as data and signals.

Each block has a specific ID, so when they are placed next to each other or on top of another, the host computer automatically detects its location. It then provides a set of options and configuration for the user to manipulate. Cambits are scalable, which means new blocks can be added to the existing setup. Thus, the user's options vary depending on what they need.

"Using our novel architecture, we were able to configure a wide range of cameras," adds Odamaki, who spent two years working with Nayar on the proof-of-concept project. The suite of computational photography algorithms used by Cambits was implemented by a group of MS project students at Columbia Engineering. Odamaki and Nayar are hoping to partner with a manufacturer to bring their concept to the public.

"There are so many exciting advances in computational photography these days," Nayar adds. "We hope this reconfigurable system will open the door to new avenues of creativity, bringing new dimensions to an art form we all enjoy."

The video below shows how cambits work, and it is truly amazing.

Read This Next
Leafy Greens
Astronomers Use Huge Space Telescope Camera to Photograph Broccoli
Futurism
A New Lensless Camera Transforms How Scientists See the Cosmos
Futurism
This Camera Takes Photos Through Windows Without the Reflection
More on Robots & Machines
FROM THE DEPT. OF...
Tuesday on futurism
The Best Smart TVs in 2022
FROM THE DEPT. OF...
Dec 1 on futurism
The Best Wired Earbuds in 2022
FROM THE DEPT. OF...
Dec 1 on futurism
The Best Gifts For Gamers in 2022
READ MORE STORIES ABOUT / Robots & Machines
Keep up.
Subscribe to our daily newsletter to keep in touch with the subjects shaping our future.
+Social+Newsletter
TopicsAbout UsContact Us
Copyright ©, Camden Media Inc All Rights Reserved. See our User Agreement, Privacy Policy and Data Use Policy. The material on this site may not be reproduced, distributed, transmitted, cached or otherwise used, except with prior written permission of Futurism. Articles may contain affiliate links which enable us to share in the revenue of any purchases made.
Fonts by Typekit and Monotype.