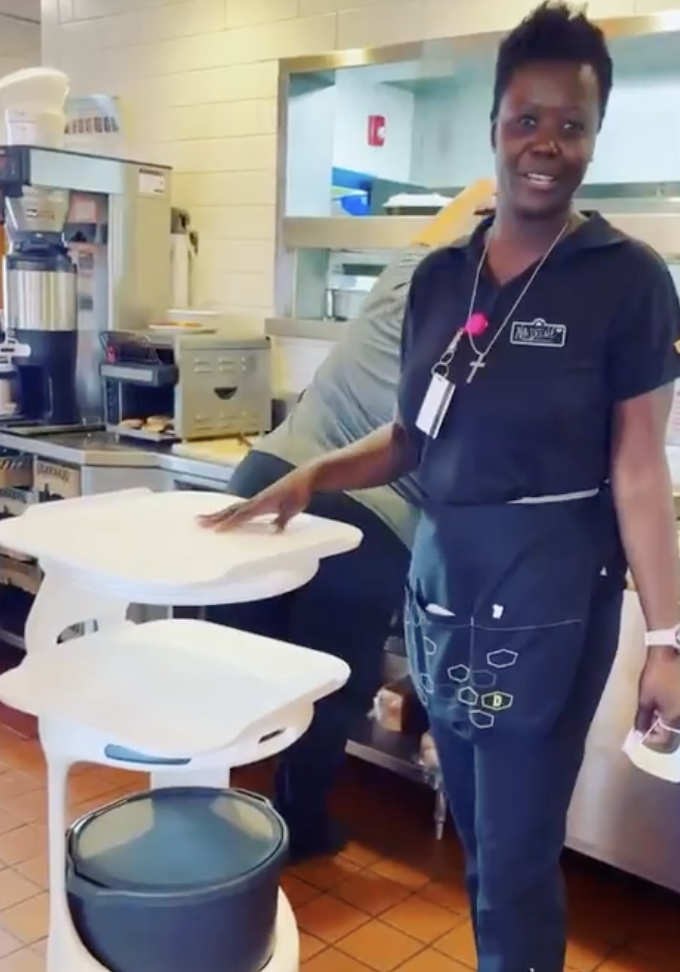 Imagine sitting down at your favorite breakfast restaurant only to be greeted by a robot, which brings your pancakes and sides instead of a human server.

Well, that's not exactly what happened at one Denny's location, but to hear the comments tell it, our robot overlords are taking over — and should be boycotted before they're serving us pancakes and eggs all over the world.

TikTok user Miabellaceo posted a now-viral video showing a robot dubbed Janet delivering two plates of hashbrowns and eggs at an undisclosed Denny's location. The simple three-tiered robot is basically a mobile cake plate that runs food for busy servers, and the video's creator said in the comments that a real, flesh-and-blood server took their order and delivered their coffee.

The comments, naturally, went off — though most, to be fair, seemed to be expressing broader anxieties about automation rather than much specific to Denny's.

"So we don't have to tip anymore?" one user commented, racking up almost 1,600 likes.

"Nope I wouldn't go there," another opined. "No people."

"This is sad," wrote yet another. "But yet they give machines the jobs they take from citizens."

Some users even called for a Denny's boycott, and one threatened to walk out if they were approached by a robotic server.

The customers made it clear they weren't greeted or initially approached by the robot, which is called a Servi and manufactured by Bear Robotics, a startup created by restaurant and tech entrepreneurs. Instead, Bear says the robot automates labor intensive parts of the business so servers can focus more on diners.

As one commenter pointed out, in locations where there is a dedicated food runner, servers may have to share tips with that person — and everyone involved, needless to say, is already underpaid. In others, busy servers share the responsibility of running food for no additional payment. Servi models have actually increased the amount of tips servers get, according to Fox Business, a potential boon for workers who often earn as little as $2 per hour and rely on tips to make ends meet.

So if customers are supposedly getting better service, having limited non-human interactions and getting food faster, what's the problem? Another commenter seemed to hit the nail on the head.

"So the waitress did the actual difficult part," they wrote.

If you've ever waited tables you know how much hard work it requires.

"As a server for 29 years, this really helped," a Denny's employee said in a recent video Bear posted to its Instagram.

Under capitalism automation can be scary, and there's no denying the service industry exploits workers. Servers were overworked even before the pandemic.

All told, yes there is a labor "shortage" — but keep in mind that according to CNBC, line cooks had the highest mortality rate during the pandemic. And if everyone is dead or the job doesn't pay enough to show up, a robot can't really take your job.

More on robots: A Russian Startup Is Selling Robot Clones of Real People

Read This Next
Killer Robot Update
Uh Oh, They Strapped a Sniper Rifle to a Robot Dog
Bleep Bloop
Scientists Build "First Living Robots" From Frog Stem Cells
Brands We Love
This LEGO Robot Is the Fun Way to Teach Your Kids About Coding and STEM
Robot Violence
YouTube Accidentally Removed Robot Battle Videos for "Animal Cruelty"
Déjà vu
Boston Dynamics Says It'll Sell Robots, But Won't Give Any Details
More on Robots & Machines
FROM THE DEPT. OF...
Thursday on futurism
The Best AV Receivers in 2022
FROM THE DEPT. OF...
Wednesday on futurism
The Best Air Purifiers of 2022
FROM THE DEPT. OF...
Tuesday on futurism
The Best Budget 3D Printers for 2022
READ MORE STORIES ABOUT / Robots & Machines
Keep up.
Subscribe to our daily newsletter to keep in touch with the subjects shaping our future.
+Social+Newsletter
TopicsAbout UsContact Us
Copyright ©, Camden Media Inc All Rights Reserved. See our User Agreement, Privacy Policy and Data Use Policy. The material on this site may not be reproduced, distributed, transmitted, cached or otherwise used, except with prior written permission of Futurism. Articles may contain affiliate links which enable us to share in the revenue of any purchases made.
Fonts by Typekit and Monotype.