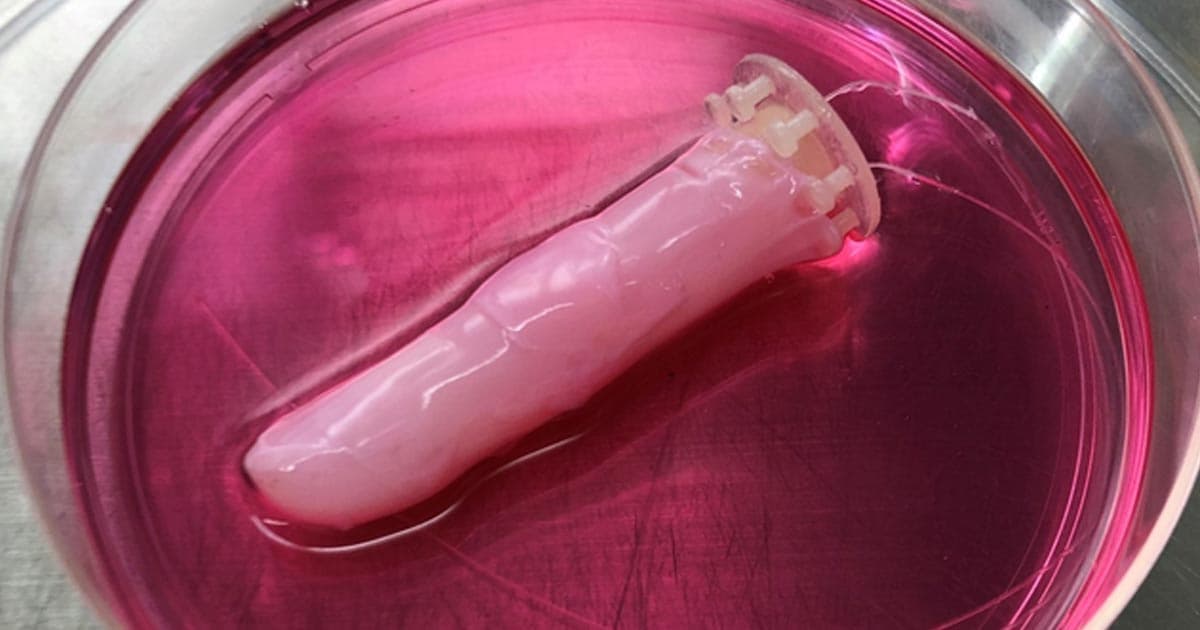 Get It Away From Me

Scientists at the University of Tokyo have created a fleshy and "slightly sweaty" robotic finger, covered in a pink layer of living skin, grown from human skin cells.

The rather phallic looking result is, well, pretty horrifying to look at.

Nonetheless, it's an impressive demonstration of synthetic skin, tech that could pave the way to ultrarealistic humanoid robots or even incredible new prosthetics.

The creepy ersatz flesh has several advantages over the silicone sheets of skin covering other contemporary soft robots. Not only is the layer water repellent, but the scientists say it can also heal itself and even hold onto moisture.

The skin also doesn't have to be meticulously crafted around the robot — it simply molds itself around the frame of the finger. That's thanks to the combination of collagen and human dermal fibroblasts used in the crafting of the finger, which can shrink and conform to the robot's shape.

"We are surprised by how well the skin tissue conforms to the robot’s surface," said Shoji Takeuchi, a professor at the University of Tokyo and lead author of a new paper published in the journal Matter, in a statement. "But this work is just the first step toward creating robots covered with living skin."

The finger's inventors appear to be understandably fascinated by their uncanny creation.

"The finger looks slightly ‘sweaty’ straight out of the culture medium," said first author Shoji Takeuchi, also a professor at the University of Tokyo, in the statement. "Since the finger is driven by an electric motor, it is also interesting to hear the clicking sounds of the motor in harmony with a finger that looks just like a real one."

But it's still a far cry from human skin, which is far more resilient. For one, the special layer has to be constantly supplied with nutrients.

It also doesn't feature any sensory neurons, let alone nails or sweat glands, something the team is hoping to address in upcoming and even more lifelike iterations.

"I think living skin is the ultimate solution to give robots the look and touch of living creatures since it is exactly the same material that covers animal bodies, Takeuchi.

More on robots: Wow! Elon Musk Says Tesla's Person in a Robot Costume Will Become a Real Robot at Some Point in the Future

Diner Drama
People Furious at Robot Serving Pancakes at Denny's
11. 28. 21
Read More
Skin Deep
Scientists Invent Artificial Skin That Can Feel Pain
9. 1. 20
Read More
Robot Violence
YouTube Accidentally Removed Robot Battle Videos for "Animal Cruelty"
8. 20. 19
Read More
+Social+Newsletter
TopicsAbout UsContact Us
Copyright ©, Camden Media Inc All Rights Reserved. See our User Agreement, Privacy Policy and Data Use Policy. The material on this site may not be reproduced, distributed, transmitted, cached or otherwise used, except with prior written permission of Futurism. Articles may contain affiliate links which enable us to share in the revenue of any purchases made.
Fonts by Typekit and Monotype.