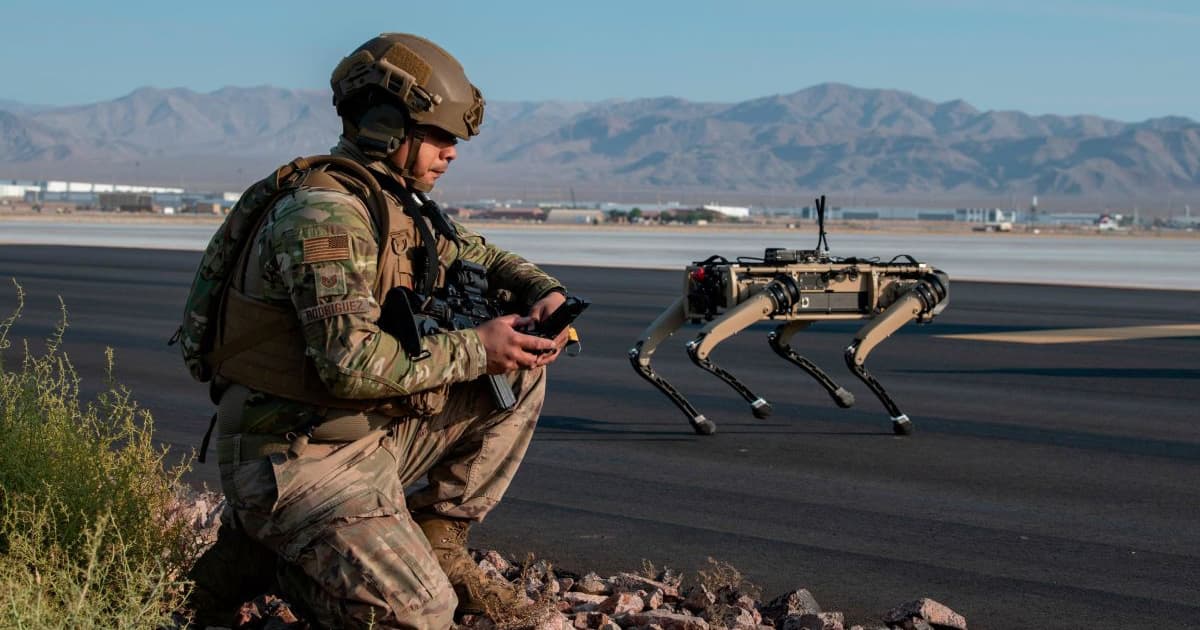 Oh No: This Company Is Building Robodogs Specifically for Combat

It sounds like that one episode of "Black Mirror."

It sounds like that one episode of "Black Mirror."

Soon, a squadron of dog-like robots will patrol and monitor an Air Force base in Florida, thanks to a robotics company that’s making robodogs explicitly for military applications.

Ghost Robotics recently unveiled its Vision 60 robots — four-legged machines that can be remote-controlled to surveil an area, clear bombs, or otherwise assist soldiers, according to Digital Trends. You can think of them sort of like the evil twin of Spot, the robodog developed by Boston Dynamics — but don’t call it that around Ghost.

The Vision 60s are meant to be able to cross difficult terrain and survive a blow, flailing their legs around to right themselves if they’re kicked over. Down the road, Ghost hopes to ramp their autonomy and build a platform for other military robots, but for now they’re still finding new uses for the robodogs.

“Imagine every time [the Air Force goes] somewhere to refuel, to pick up supplies, or to protect our fighter jets on the tarmac, our robots climb out and do perimeter security,” Parikh told Digital Trends.

Thankfully, Parikh clarified that these military robots won’t carry any weapons of their own. Instead, the company wants them to handle jobs that would typically put a human in danger.

“We’ve not heard once where [governments] want to use this for weapons,” he told Digital Trends.

More on robodogs: US Military Deploys Robot Dogs to Guard Air Force Base

Wait What
FCC Commissioner Says He’s Afraid of Robodogs and We Can’t Tell If He’s Joking
10. 31. 21
Read More
Bot Crime
Experts Shocked by Military Robodog With Sniper Rifle Attachment
10. 13. 21
Read More
Killer Robot Update
Uh Oh, They Strapped a Sniper Rifle to a Robot Dog
10. 12. 21
Read More
+Social+Newsletter
TopicsAbout UsContact Us
Copyright ©, Camden Media Inc All Rights Reserved. See our User Agreement, Privacy Policy and Data Use Policy. The material on this site may not be reproduced, distributed, transmitted, cached or otherwise used, except with prior written permission of Futurism. Fonts by Typekit and Monotype.