"This crosses a moral, legal and technical line, taking us to a dark and dangerous world." 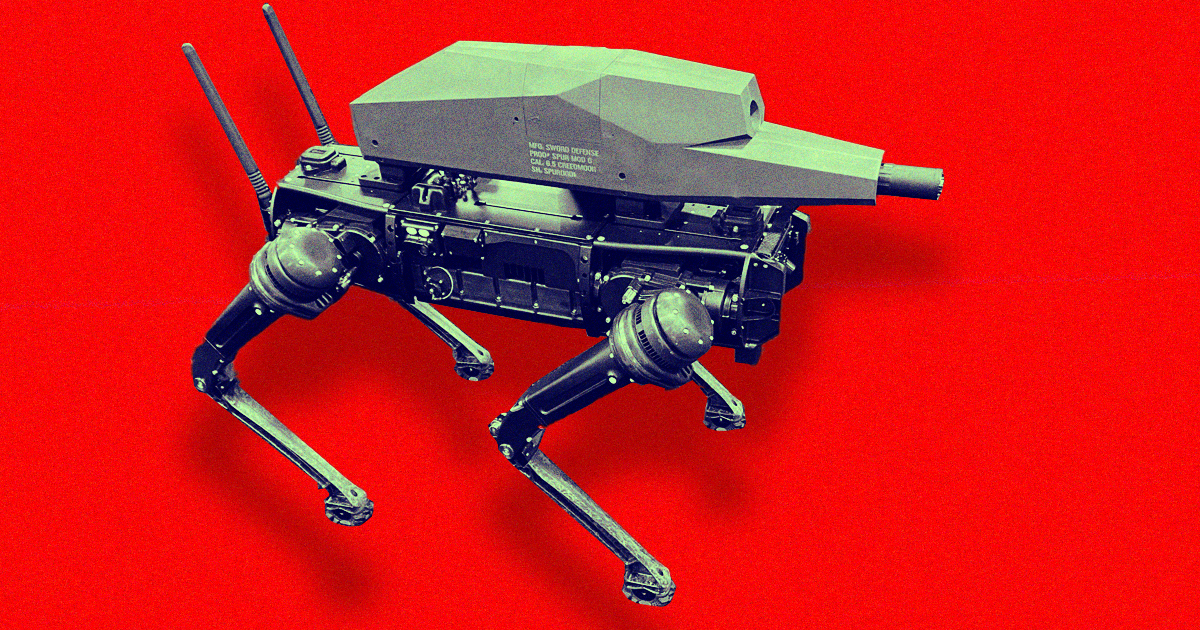 Yesterday, we reported that the military hardware company Ghost Robotics had debuted a robodog with an attached sniper rifle.

Now, experts are speaking out against the heavily armed robodog, which they say marks an inflection point in the development of killer robots — and should represent an urgent opportunity to reflect on whether the tech should be allowed at all.

"This crosses a moral, legal and technical line, taking us to a dark and dangerous world," UNSW Sydney AI professor Toby Walsh told Futurism. "Such weapons will be used by terrorists and rogue states. They will be weapons of terror."

Walsh also pointed out that while it's not clear how much autonomy Ghost's robodog currently has, world militaries are already blurring the line between deadly drones controlled by human operators and ones with autonomous killing capability. In particular, he pointed to an incident in November of last year in which Israeli operatives assassinated an Iranian scientist using an AI-assisted robot machine gun.

"I only hope it adds urgency to the ongoing discussions at the UN to regulate this space, and quietens those voices saying the technology is a long way off," Walsh said, referring to Ghost's robodog. "It isn't."

"The vast majority of responses to this announcement on Twitter are of the 'hope you burn in hell' variety," Russell said. "That's because normal people understand that allowing machines to decide to kill humans is a bad idea. As one of the responses says, Terminator was a WARNING, not a MANUAL."

The rifle-equipped robodog was specifically a Q-UGV model, Kelsey Atherton wrote in a detailed breakdown for our sister publication Popular Science, and its firearm was made by SWORD International, with a range of 3,900 feet.

The decision to arm a robodog also puts Ghost out ahead of its competitor Boston Dynamics, which has wowed the world with its technical demonstrations but publicly pledged not to weaponize its robots. In fact, Boston Dynamics was very angry earlier this year when artists mounted a paintball gun to one of its Spot robodogs, which is very similar in size and function to Ghost's Q-UGV.

Not everybody was equally alarmed by the Ghost prototype. University of Pennsylvania professor of political science Michael Horowitz, another expert on autonomous weapon systems, told us that he saw the robodog as similar to the type of armed drone already used by numerous international militaries.

"Given that the system is controlled by humans, and other countries have developed armed, remotely-piloted robotic ground systems, I am not sure this system raises any new ethical questions beyond those raised by any remotely-piloted system, whether in the air or on the ground," Horowitz said. "But I would need to know more about system details to be sure."

More on Ghost Robotics: Uh Oh, They Strapped a Sniper Rifle to a Robot Dog

Read This Next
Quacks Like a Duck
Watching Elon Musk's Robot Back to Back With Boston Dynamics Is... Something
Wait What
FCC Commissioner Says He's Afraid of Robodogs and We Can't Tell If He's Joking
Killer Robot Update
Uh Oh, They Strapped a Sniper Rifle to a Robot Dog
Good Riddance
After Public Rage, NYPD Secretly Fires Robot Dog
Dog Days
NYPD Robodog Involved in Arrest of Man With Gun
More on Robots & Machines
Robot Arm News
Yesterday on the byte
European Space Agency Shows Off Concept for Martian Sample Picker-Upper
From the Dept. of...
Yesterday on futurism
The Best Desk Lamps of 2023
Robot Ridicule
Jan 28 on the byte
Hilarious Video Shows Boston Dynamics Robot Failing Horribly
READ MORE STORIES ABOUT / Robots & Machines
Keep up.
Subscribe to our daily newsletter to keep in touch with the subjects shaping our future.
+Social+Newsletter
TopicsAbout UsContact Us
Copyright ©, Camden Media Inc All Rights Reserved. See our User Agreement, Privacy Policy and Data Use Policy. The material on this site may not be reproduced, distributed, transmitted, cached or otherwise used, except with prior written permission of Futurism. Articles may contain affiliate links which enable us to share in the revenue of any purchases made.
Fonts by Typekit and Monotype.