Boston Dynamics Mad Someone Used Their Terrifying RoboDog as Intended

It's a gross double standard. 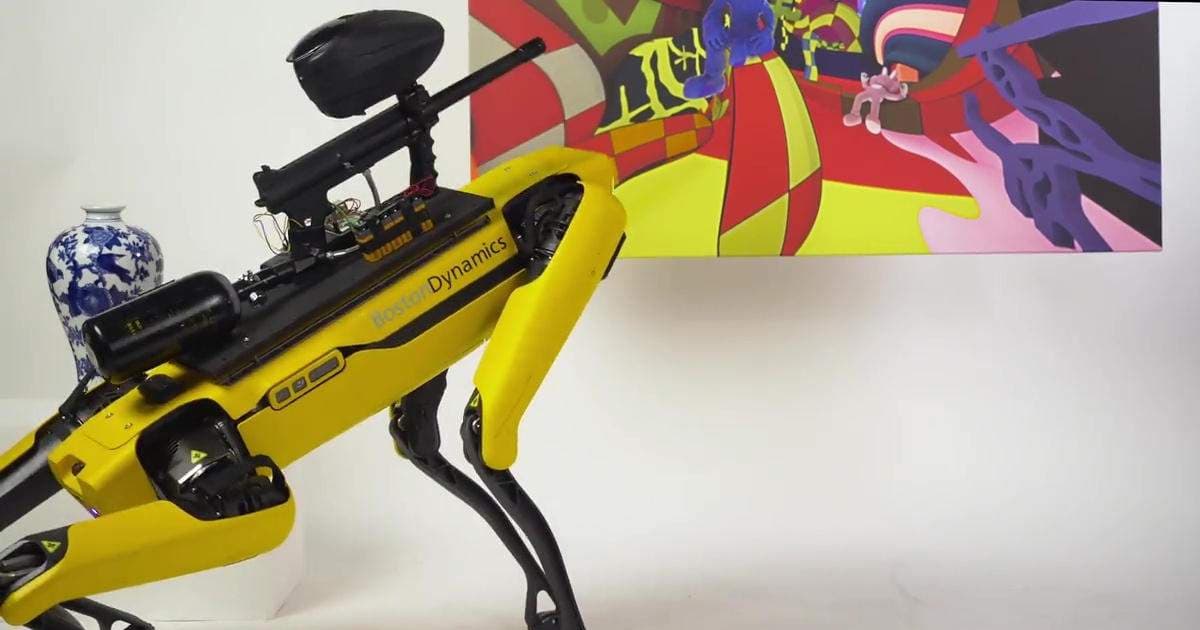 A New York marketing collective/art-school techno-pranksters team called MSCHF decided to have a little fun with their $74,500 robot Boston Dynamics robot dog. How? By strapping a paintball gun to its back, and letting it loose in an art gallery on Wednesday afternoon, a stunt they called "Spot's Rampage."

Best of all, they gave strangers on the internet control over the terrifying transformation.

The robot's maker, Boston Dynamics, is pissed. In a statement posted to their Twitter last week, the robotics company called the spectacle a "provocative use of our industrial robot Spot."

"To be clear, we condemn the portrayal of our technology in any way that promotes violence, harm, or intimidation," the statement reads.

MSCHF knew the event wouldn't exactly be endorsed by the company. "We talked to Boston Dynamics and they hated this idea," the collective's FAQ reads. "They said they would give us another two Spots for free if we took the gun off. That just made us want to do this even more."

Boston Dynamics' party-pooper attitude comes off as, let's just say, a bit disingenuous — given that Spot the robot dog has been adopted by several law enforcement agencies since going on sale last summer.

In fact, just days after MSCHF announced their event, videos appeared online showing a Spot robot patrolling the streets, controlled by the New York City Police Department, arguably the very definition of promoting "intimidation" on the part of one of the most militarized police forces in the Western World (with a reputation to match).

Then, there was a different Spot, used to patrol a Singapore park to promote social distancing — not exactly a rosy picture of neighborly unity and harmony.

MSCHF put one and one together. In its FAQ's section on whether there will be a loser following the event, the collective sets the record straight: "The human race, when remote-operated dogs of war become commonplace. As these war dogs become fixtures of militaries and militarized police we will all learn a new meaning of fear: an oppressor who can pull the trigger without even needing to be physically present."

Boston Dynamics has its roots in military funding. While the robot maker has repeatedly attempted to distance itself  from its roots and promote itself as a company that sells dancing robots that can do gymnastics, we've already seen its robotic offspring being used to intimidate by institutions that have a long track record of using violence to suppress the already suppressed.

It's a gross double standard: if Boston Dynamics truly cares about stopping its robots from being used to promote violence or intimidation, it wouldn't have sold them to militarized police departments in the first place.

All MSCHF's marketing stunt does is shine a light on this double standard.

More on the rampage: Company Mounts Paintball Gun on Robot Dog to Shoot Up Art Gallery

Read This Next
Quacks Like a Duck
Watching Elon Musk's Robot Back to Back With Boston Dynamics Is... Something
Wait What
FCC Commissioner Says He's Afraid of Robodogs and We Can't Tell If He's Joking
Bot Crime
Experts Shocked by Military Robodog With Sniper Rifle Attachment
Good Riddance
After Public Rage, NYPD Secretly Fires Robot Dog
Dog Days
NYPD Robodog Involved in Arrest of Man With Gun
More on Robots & Machines
From the Dept. of...
12:00 AM on futurism
The Best Exercise Bikes of 2023
It's Nothing Pers...
Yesterday on the byte
Scientists Create Shape-Shifting Robot That Can Melt Through Prison Bars
From the Dept. of...
Yesterday on futurism
The Best Smart Lights of 2023
READ MORE STORIES ABOUT / Robots & Machines
Keep up.
Subscribe to our daily newsletter to keep in touch with the subjects shaping our future.
+Social+Newsletter
TopicsAbout UsContact Us
Copyright ©, Camden Media Inc All Rights Reserved. See our User Agreement, Privacy Policy and Data Use Policy. The material on this site may not be reproduced, distributed, transmitted, cached or otherwise used, except with prior written permission of Futurism. Articles may contain affiliate links which enable us to share in the revenue of any purchases made.
Fonts by Typekit and Monotype.