And it's letting people online — including you — control the rampage. 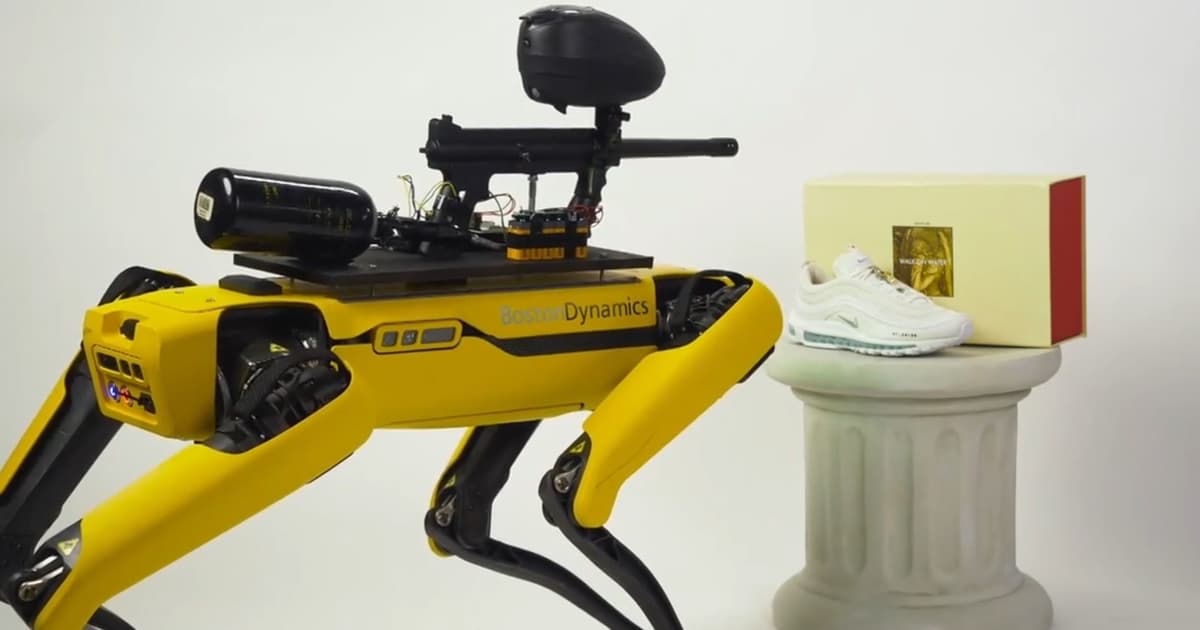 Marketing collective MSCHF has decided to let a robot dog equipped with a paintball loose inside an art gallery — and it's letting people around the world take control of it remotely, The Verge reports.

The campaign is called "Spot's Rampage," in a nod to the Boston Dynamics robot dog Spot, and it'll kick off on February 24. Those who want to take control of the paintball-blasting killer robot can do so via the event's website. Every two minutes, a new randomly selected person will get control over Spot.

"We’ve put a Spot in an art gallery, mounted it with a .68cal paintball gun, and given the internet the ability to control it," reads the event's description. "We’re livestreaming Spot as it frolics and destroys the gallery around it."

It's a fun take on an otherwise terrifying vision of the future in which killer robots come for us all.

"When killer robots come to America they will be wrapped in fur, carrying a ball," the collective writes in a statement. "Spot is Rob Rhinehart’s ideal pet: it never shits," a reference to the inventor of Soylent.

"Today we learned that an art group is planning a spectacle to draw attention to a provocative use of our industrial robot Spot," reads a statement posted to its Twitter account. "To be clear, we condemn the portrayal of our technology in any way that promotes violence, harm, or intimidation."

Boston Dynamics also warned that any breaches of its terms and conditions would end up voiding the robot's warranty. It's unclear if those terms say anything about paintball guns.

The event is a surprisingly literal — but mostly light-hearted — commentary on a chilling future in which robot police dogs patrol our streets with weaponry mounted to their backs.

"It feels like five years from now, I could be walking around Brooklyn and just see one of these things with like a taser on it being controlled by the cops," MSCHF member Daniel Greenberg told The Verge.

For now, that future is fortunately still many years out — that is, if it ever materializes. Spot isn't coming to get you any time soon. Greenberg admitted that "it really does nothing other than walk, to be totally honest."

READ MORE: MSCHF’s latest drop lets you control a Boston Dynamics robot with a paintball gun on its back [The Verge]

More on Spot: Boston Dynamics Robodog Has a Dexterous Arm in New Video

Read This Next
Quacks Like a Duck
Watching Elon Musk's Robot Back to Back With Boston Dynamics Is... Something
Wait What
FCC Commissioner Says He's Afraid of Robodogs and We Can't Tell If He's Joking
Bot Crime
Experts Shocked by Military Robodog With Sniper Rifle Attachment
Killer Robot Update
Uh Oh, They Strapped a Sniper Rifle to a Robot Dog
Good Riddance
After Public Rage, NYPD Secretly Fires Robot Dog
More on Robots & Machines
Blow Up Doll
Monday on the byte
Ukraine Accuses Russia of Using Inflatable "Dummy Tanks," Which Deflated
From the Dept. of...
Monday on futurism
The Best UPS Battery Backups of 2023
FROM THE DEPT. OF...
Jan 29 on futurism
The Best Netgear Routers of 2023
READ MORE STORIES ABOUT / Robots & Machines
Keep up.
Subscribe to our daily newsletter to keep in touch with the subjects shaping our future.
+Social+Newsletter
TopicsAbout UsContact Us
Copyright ©, Camden Media Inc All Rights Reserved. See our User Agreement, Privacy Policy and Data Use Policy. The material on this site may not be reproduced, distributed, transmitted, cached or otherwise used, except with prior written permission of Futurism. Articles may contain affiliate links which enable us to share in the revenue of any purchases made.
Fonts by Typekit and Monotype.