Watching Elon Musk's Robot Back to Back With Boston Dynamics Is... Something

"None of this is cutting edge." 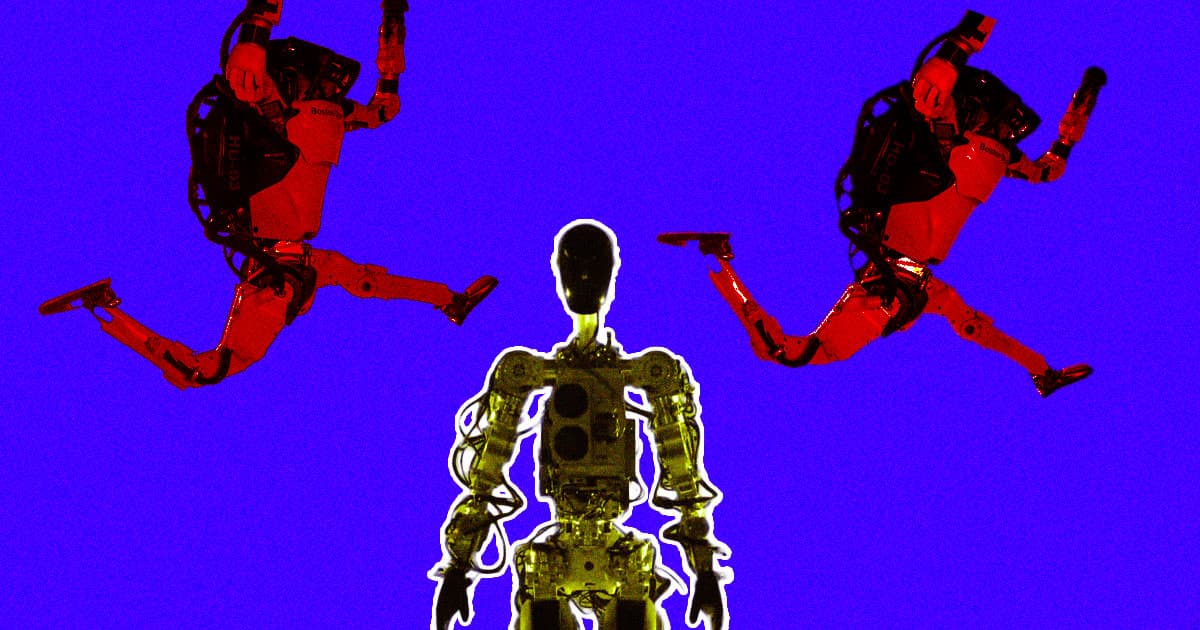 At Tesla's artificial intelligence event on Friday, the company showed off two early prototypes of its Optimus humanoid robot, a walking automaton meant to take care of the "boring" tasks in life.

Perhaps as expected, what the company unveiled on stage was far from impressive — especially considering just how far ahead the competition is.

The first robot, a "rough development" model dubbed Bumble C, awkwardly shuffled onto the stage with its wires and electronics exposed.

Tesla CEO Elon Musk also unveiled a next-generation version, which had to be carried onstage because, he said, "we just didn’t want it to fall on its face."

In short, the demos were of a very early-stage product, especially compared to its competitors that have been working on humanoid robotics for much longer.

Take Boston Dynamics' Atlas for instance, a robot that can bust impressive dance moves, do parkour, and even backflip off a platform.

Sorry, folks — but after watching that robotic wizardry, take a gander at Tesla's attempt. It'd be an impressive student project, but for now, it looks more like something you'd buy on Alibaba than a serious research project.

"None of this is cutting edge," robotics expert Cynthia Yeung tweeted. "Hire some PhDs and go to some robotics conferences Tesla."

Others stopped short of ridiculing the company.

"Am I blown away? No," Christian Hubicki, robotics professor at Florida State University wrote. "Am I laughing? No."

Hubicki argued that Tesla is likely relying on a decades old walking method in robotics, forcing the robot to slowly shift its balance from one foot to the next in a semi-crouched position.

"They are very similar in concept to Honda’s Asimo robots, the development of which is now abandoned," Will Jackson, CEO of Engineered Arts, the company behind that robot with eerily human facial expressions, told The Verge. "The overall design is heavily built, clumsy and power inefficient — the hands are very basic, the only redeeming feature is a clutch mechanism in the finger actuation."

Those kinds of criticisms echo sentiments from experts after Musk's brain computer interface startup Neuralink showed off a monkey playing a game of ping pong with its mind — a demonstration that experts called "outdated" and "not exactly new."

Musk's penchant for hyperbole doesn't exactly help. As he's done many times before, he offered up some hard-to-believe numbers on Friday.

According to the billionaire, a production-ready Optimus will go on sale for "much less than a car — much less than $20,000" and "within three years, probably not more than five years."

Sure, Tesla has come some way since having a dancer in a spandex suit masquerade as a humanoid robot on stage just over a year ago.

But given Musk's abysmal track record when it comes to his predictions — he originally promised that Tesla would be selling the robot by next year — we'll believe it when we see it.

Read This Next
TV for Your Face
Elon Musk Says the Metaverse Sucks and Neuralink Will Be Better
Wait What
FCC Commissioner Says He's Afraid of Robodogs and We Can't Tell If He's Joking
Bot Crime
Experts Shocked by Military Robodog With Sniper Rifle Attachment
Tesla Bots Roll Out
Elon Musk Just Announced a Humanoid "Tesla Bot"
Good Riddance
After Public Rage, NYPD Secretly Fires Robot Dog
More on Robots & Machines
FROM THE DEPT. OF...
Thursday on futurism
The Best AV Receivers in 2022
FROM THE DEPT. OF...
Wednesday on futurism
The Best Air Purifiers of 2022
FROM THE DEPT. OF...
Tuesday on futurism
The Best Budget 3D Printers for 2022
READ MORE STORIES ABOUT / Robots & Machines
Keep up.
Subscribe to our daily newsletter to keep in touch with the subjects shaping our future.
+Social+Newsletter
TopicsAbout UsContact Us
Copyright ©, Camden Media Inc All Rights Reserved. See our User Agreement, Privacy Policy and Data Use Policy. The material on this site may not be reproduced, distributed, transmitted, cached or otherwise used, except with prior written permission of Futurism. Articles may contain affiliate links which enable us to share in the revenue of any purchases made.
Fonts by Typekit and Monotype.