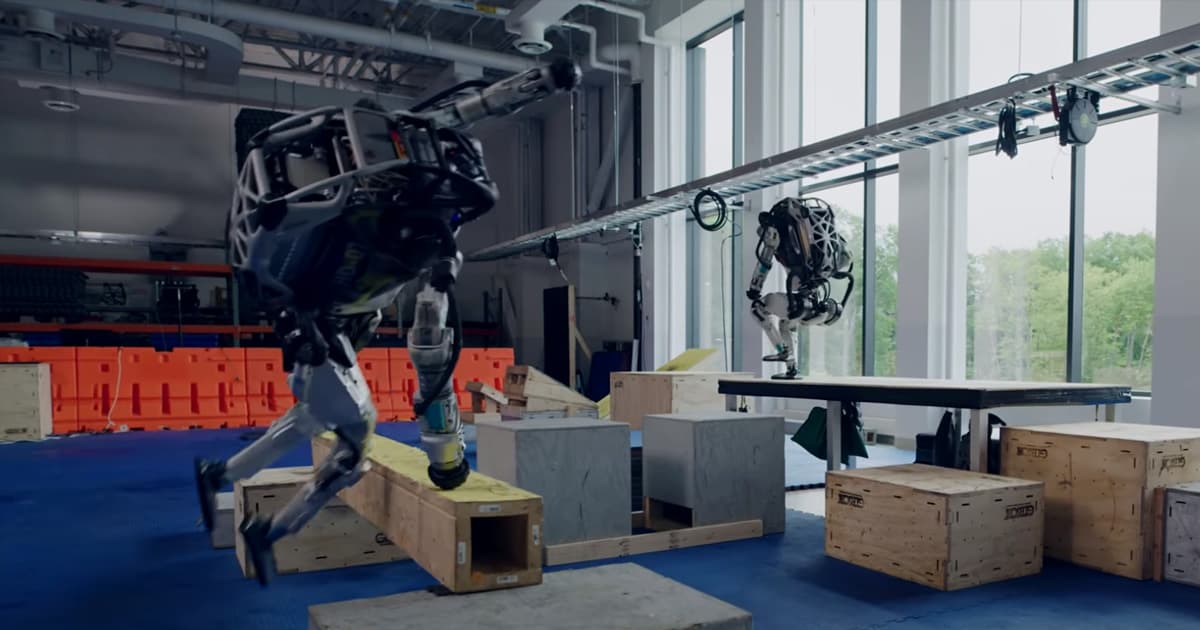 We bet you haven't seen a humanoid robot vault over an obstacle before.

We bet you haven't seen a humanoid robot vault over an obstacle before.

In the video, a pair of Atlas robots can be seen performing some impressive parkour, leaping over chasms, jumping over uneven terrain, and finishing up with a casual back flip. At one point, Atlas even vaults over a board using one of its arms to steady itself.

It all feels intensely choreographed — perhaps not exactly what the forefathers of parkour had in mind. It's "free" running, but within the constraints of computer code.

The robot maker has shown off the athletic prowess of its Atlas robot on a number of occasions, from going for a cool jog in the garden to busting some impressive dance moves.

And now, Atlas is gunning for the rooftops. Although whether Boston Dynamics is planning to allow its robot to perform real parkour stunts, leaping from roof to roof, seems unlikely.

In a separate video released today, the company gives us a behind the scenes look at the development of the five-foot and 190-pound robot, the "culmination of over a decade of hydraulic humanoid robotics work," according to team lead Scott Kuindersma.

Rather than a spontaneous excursion, Atlas' parkour chops had to be preprogrammed. But of course, humans often plan out parkour routines as well.

"It’s not the robot just magically deciding to do parkour, it’s kind of a choreographed routine, much like a skateboard video or a parkour video," Benjamin Stephens, control lead for Atlas, explained in the video.

It's perhaps unsurprising that Kuindersma believes that some 20 years from now our lives will be filled with robots that can move "with grace, reliability, and work alongside humans to enrich our lives," as he said in a statement.

"But we’re still in the early days of creating that future," he added. "I hope that demonstrations like this provide a small glimpse of what’s possible."