Boston Dynamics' Robot Just Went For A Cool Jog In The Garden, Like It's No Big Deal 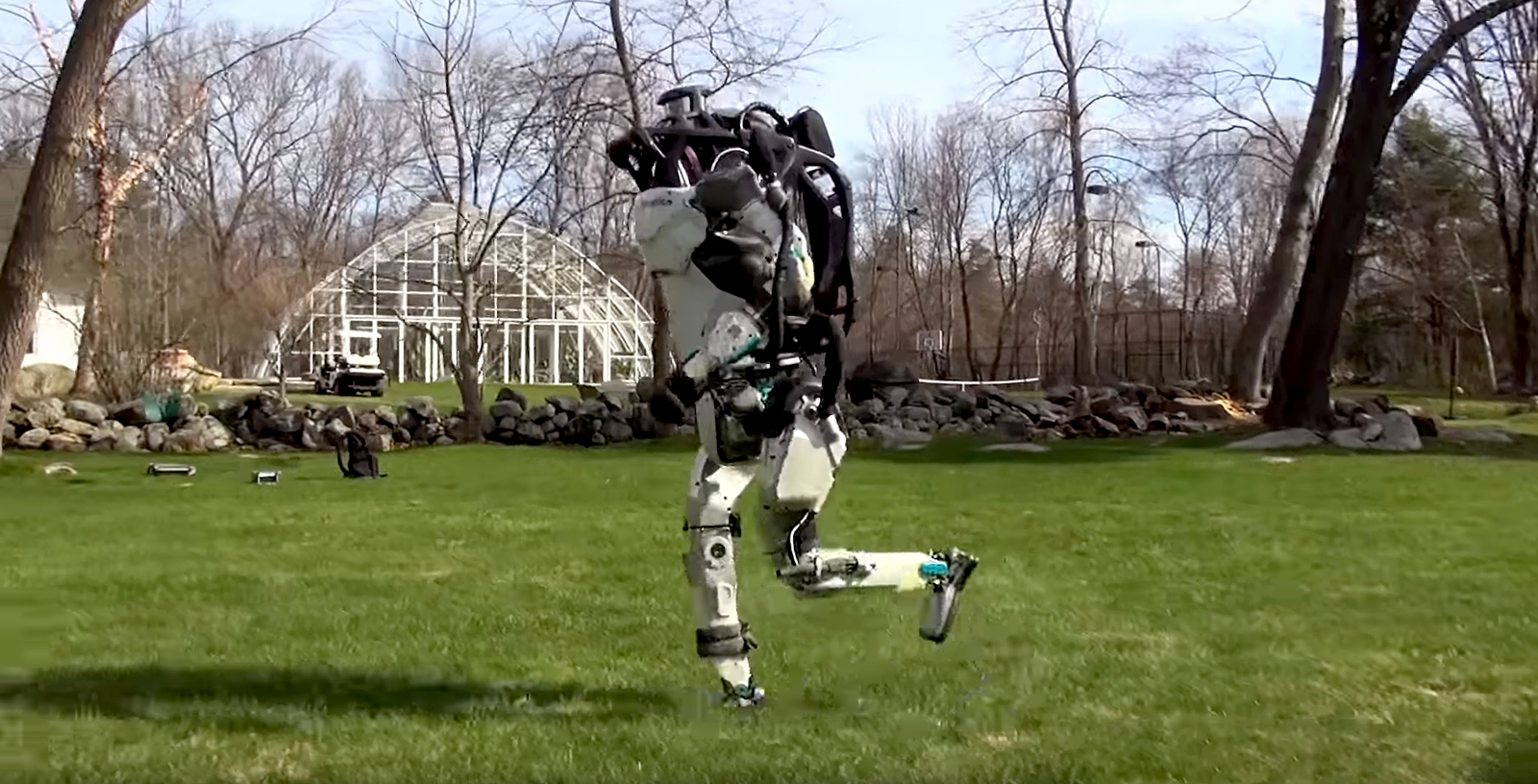 Everybody needs to get some fresh air every once in a while. Even, uh, robots.

Boston Dynamics just uploaded a video of its upright, bipedal robot called Atlas going for a jog. No tethers, no awkward stiffness, just a robot, a green field, and plenty of fresh air. No stress holding it down, Atlas effortlessly crosses different types of terrain, from gentle slopes, to heavy brush — even a log can't slow him down. With the help of a little squat, Atlas clears the log like an Olympic gymnast, going for gold. Good job, Atlas! 10/10

Needless to say, Boston Dynamics' robots are getting pretty damn good at crossing all kinds of terrain, and doing every-day human stuff. And all by themselves now, relying on battery power, instead of having to rely on external power sources. They can leap, open doors, and sustain some serious physical (and psychological) abuse. Let's just hope they don't hold grudges.

In a second video, Boston Dynamics shows off its SpotMini robot walking along a pre-defined path through a warehouse — fully autonomously, without any extra help. The camera follows it as it makes its way along a specified route through Boston Dynamics' offices and lab facility. Sensors on its front, back, and sides interpret the physical world around it in real-time to help SpotMini situate itself. All it had to go on was depth data collected from a previous tour.

It's only a matter of time until videos of engineers being enslaved by their robot captors, appear on YouTube. Unfortunately, even running away from them won't help you much now.

Read This Next
Health Sale
Remember IBM's Amazing Watson AI? Now It's Desperately Trying to Sell It Off
From Our Partners
Enjoy Pre-Black Friday Savings On This Sterilizing Robot That Kills Viruses and Germs
From Our Partners
Command A Mini Robot Arm With This Pre-Black Friday Deal
From Our Partners
Build A Cyberpunk Arsenal With These Robot Kits
From Our Partners
How to Stay Focused At Work And Meetings Using AI
More on Sci-Fi Visions
Human v. Giraffe
Tuesday on the byte
Chaotic Italian Fashion Line Baffles Facial Recognition Software
Step One
Tuesday on the byte
World’s Third Richest Person Says He’s Developed "Addiction" to ChatGPT
FROM THE DEPT. OF...
Tuesday on futurism
The Best Places to Buy A Laptop in 2023
READ MORE STORIES ABOUT / Sci-Fi Visions
Keep up.
Subscribe to our daily newsletter to keep in touch with the subjects shaping our future.
+Social+Newsletter
TopicsAbout UsContact Us
Copyright ©, Camden Media Inc All Rights Reserved. See our User Agreement, Privacy Policy and Data Use Policy. The material on this site may not be reproduced, distributed, transmitted, cached or otherwise used, except with prior written permission of Futurism. Articles may contain affiliate links which enable us to share in the revenue of any purchases made.
Fonts by Typekit and Monotype.