Doors are no match for the dog-like bot. 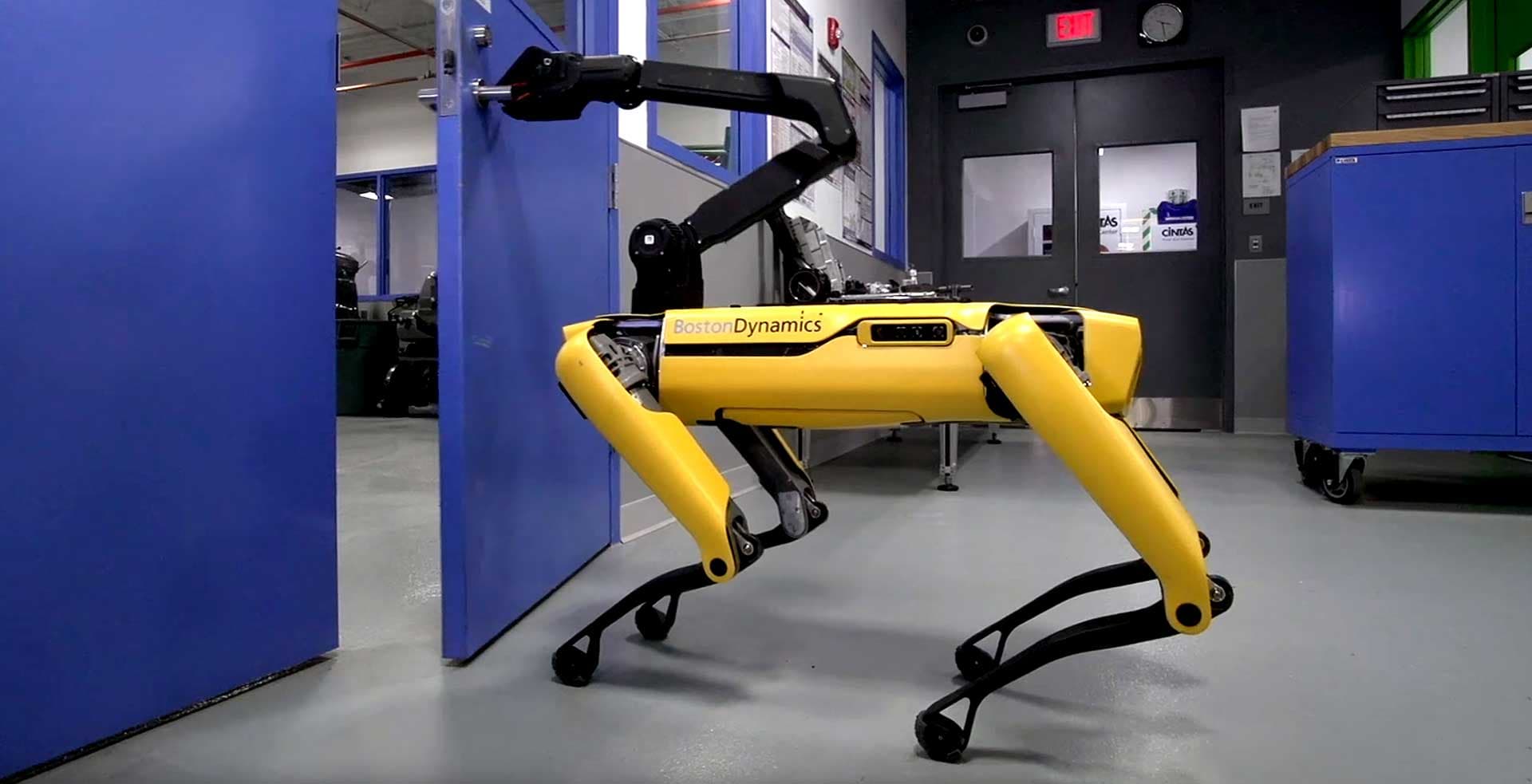 SpotMini, Boston Dynamics's dog-like quadruped robot, is back, and it's learned a new trick. The robot, which was unveiled in June 2016 and then updated in November 2017, can now open doors and hold them open.

While opening a door is slightly old hat for a Boston Dynamics robot — Atlas barreled through a push-bar door two years ago — SpotMini's operation is more eloquent. The robot uses its fifth appendage, an arm mounted essentially where a canine's head would be, to swiftly assess the door, locate and twist the handle, and pull the door open.

In a video released by Boston Dynamics, not only does the new-and-improved SpotMini open the door for itself, it even holds it open for its robot colleague. A portrait of professional collegiality, this is a big step up from the solo activities of washing dishes or rolling over.

Boston Dynamics has made steady progress in their efforts to build robots that move in a life-like manner, whether it's Atlas' Homo sapiens-like saunter or SpotMini's four-legged gallop. The same month they debuted their updated SpotMini, the company made headlines by releasing a video showing their Atlas robot's back-flipping antics.

The SpotMini's latest development is confirmation that progress continues to march on behind Boston Dynamics's doors. But while biomimetic robots are certainly useful — the ability to copy human motion enables these robots to dexterously manipulate objects and navigate complex terrain — they still inspire more fear than awe in many people.

Outlets such as The Verge and Popular Mechanics have noted the similarities between SpotMini and the door-opening velociraptors of Jurassic Park splendor — not exactly a calming comparison, so if you envision these robots taking over the world, you're not alone.

Read This Next
Quacks Like a Duck
Watching Elon Musk's Robot Back to Back With Boston Dynamics Is... Something
Wait What
FCC Commissioner Says He's Afraid of Robodogs and We Can't Tell If He's Joking
Bot Crime
Experts Shocked by Military Robodog With Sniper Rifle Attachment
Good Riddance
After Public Rage, NYPD Secretly Fires Robot Dog
Dog Days
NYPD Robodog Involved in Arrest of Man With Gun
More on Robots & Machines
Blow Up Doll
Monday on the byte
Ukraine Accuses Russia of Using Inflatable "Dummy Tanks," Which Deflated
From the Dept. of...
Monday on futurism
The Best UPS Battery Backups of 2023
FROM THE DEPT. OF...
Jan 29 on futurism
The Best Netgear Routers of 2023
READ MORE STORIES ABOUT / Robots & Machines
Keep up.
Subscribe to our daily newsletter to keep in touch with the subjects shaping our future.
+Social+Newsletter
TopicsAbout UsContact Us
Copyright ©, Camden Media Inc All Rights Reserved. See our User Agreement, Privacy Policy and Data Use Policy. The material on this site may not be reproduced, distributed, transmitted, cached or otherwise used, except with prior written permission of Futurism. Articles may contain affiliate links which enable us to share in the revenue of any purchases made.
Fonts by Typekit and Monotype.