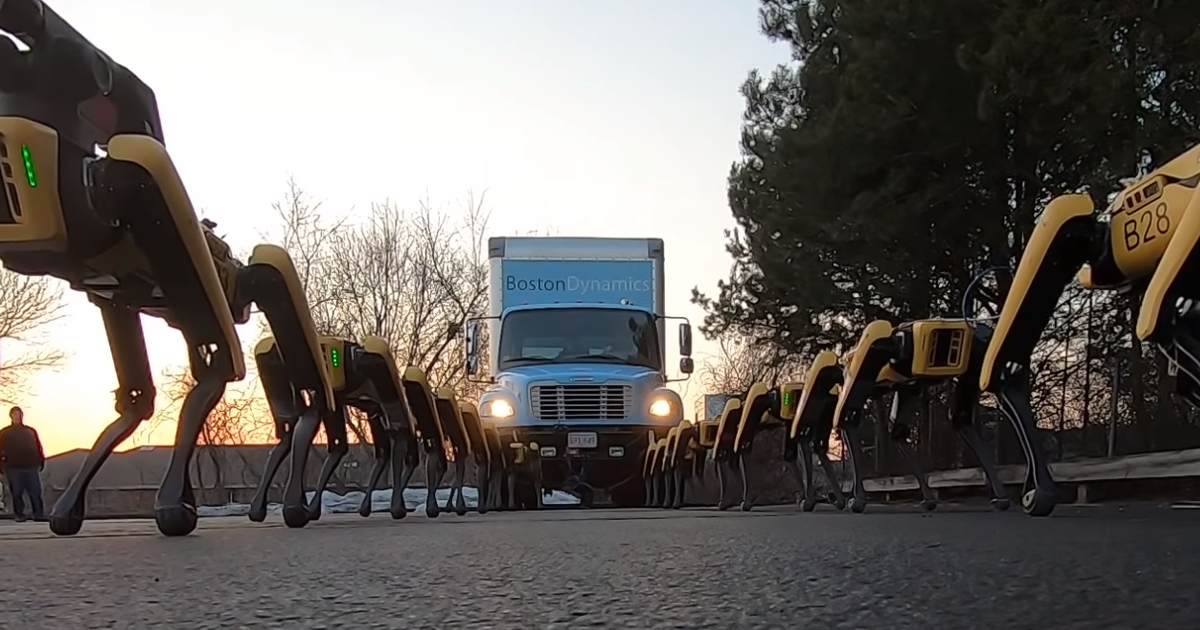 Step aside, reindeer — robot dogs are hauling this load.

In an ominous video titled "Mush, Spot Mush!" posted on YouTube Tuesday, robot maker Boston Dynamics showed off the sheer strength of its SpotMini quadripedal robot dog. The clip shows 10 specialized Spotmini derivatives called Spotpower hauling a box truck across a parking lot — and at a one degree incline.

The robot maker announced in 2018 that it will start selling SpotMini robot dogs to the public this year. The 66 pound robot can climb stairs, cross a wide variety of different terrain and carry 31 pounds.

Potential applications range from home use to private security. The caption of today's video announced that the Spotpower model will be sold to the public for a "range of applications soon."

What exactly those applications will look like and how much a Spotpower will go for is still unclear. But it's an incredible feat of strength and agility that sets the bar for future commercial robots.

Read This Next
From Our Partners
Can't Wait For November 26th? Save On These Pre-Black Friday Doorbusters Deals Now!
From Our Partners
Build A Cyberpunk Arsenal With These Robot Kits
Brands We Love
Teach Your Kids Coding and Engineering With These Cool Build-Your-Own Robot Kits
Brands We Love
This Robot Arm Can Print a Bottle Opener and Then Pour You the Beer
Brands We Love
Do You Really Need a Desktop Robotic Arm? Yes, Obviously You Do.
More on Sci-Fi Visions
What is Happening
Yesterday on the byte
Elon Musk Sets His Twitter Account to Private
From the Dept. of...
Monday on futurism
The Best Humidifiers of 2023
Human v. Giraffe
Jan 24 on the byte
Chaotic Italian Fashion Line Baffles Facial Recognition Software
READ MORE STORIES ABOUT / Sci-Fi Visions
Keep up.
Subscribe to our daily newsletter to keep in touch with the subjects shaping our future.
+Social+Newsletter
TopicsAbout UsContact Us
Copyright ©, Camden Media Inc All Rights Reserved. See our User Agreement, Privacy Policy and Data Use Policy. The material on this site may not be reproduced, distributed, transmitted, cached or otherwise used, except with prior written permission of Futurism. Articles may contain affiliate links which enable us to share in the revenue of any purchases made.
Fonts by Typekit and Monotype.