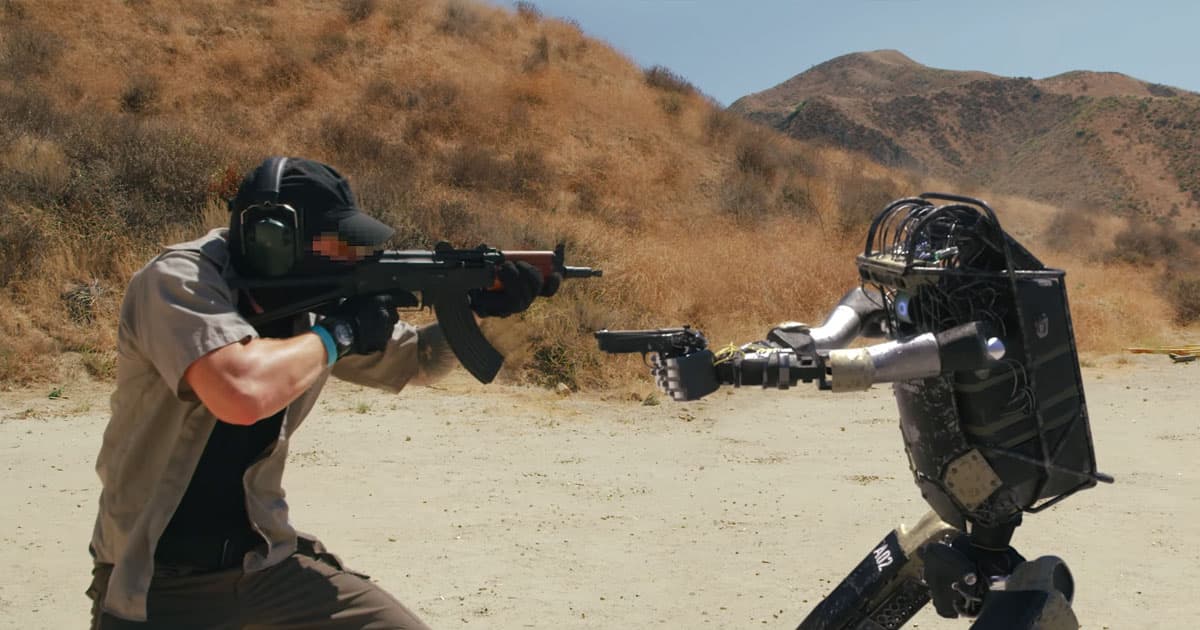 The video is a parody — but the subject is deadly serious.

The video is a parody — but the subject is deadly serious.

The "Bosstown Dynamics" team still hasn't learned how to treat its robots.

In June, Los Angeles-based production studio Corridor Digital released a Boston Dynamics parody video in which a robot seeks revenge on its makers after they subject it to over-the-top robustness training.

In a new video, the "Bosstown Dynamics" team heads to a desert shooting range for an intense training session with a military robot — and it doesn't exactly go the way they'd hoped.

The clip is hilarious, with the robot hitting every target using an array of firearms despite the trainers' repeated efforts to mess it up.

They smash bricks over the robot's head, nail it with a battering ram, and once again bust out the hockey sticks to slapshot the bot in the back — but despite all the abuse, the military robot refuses to shoot at any of the humans on the training course.

Eventually, though, the team does discover that their robot has a limit to just how far it's willing to go to please its makers — and that limit involves a yellow robot dog that bears a strong resemblance to Boston Dynamics' SpotMini.

The video is clearly meant to be funny, but super soldier robots are a very real possibility for the future — and not one to laugh at.

Across the globe, nations are scrambling to be the first to have the most cutting-edge autonomous tech ready for military operations, from AI-powered tanks and ships to armed autonomous drones and animal-inspired "biobots".

It's not hard to imagine a military jumping at the chance to put a robot like the one depicted in the video on the battlefield.

More on robot soldiers: "Biobots" Will Serve Alongside South Korean Soldiers by 2024