A larger number of smaller drone ships could overwhelm the enemy at sea. 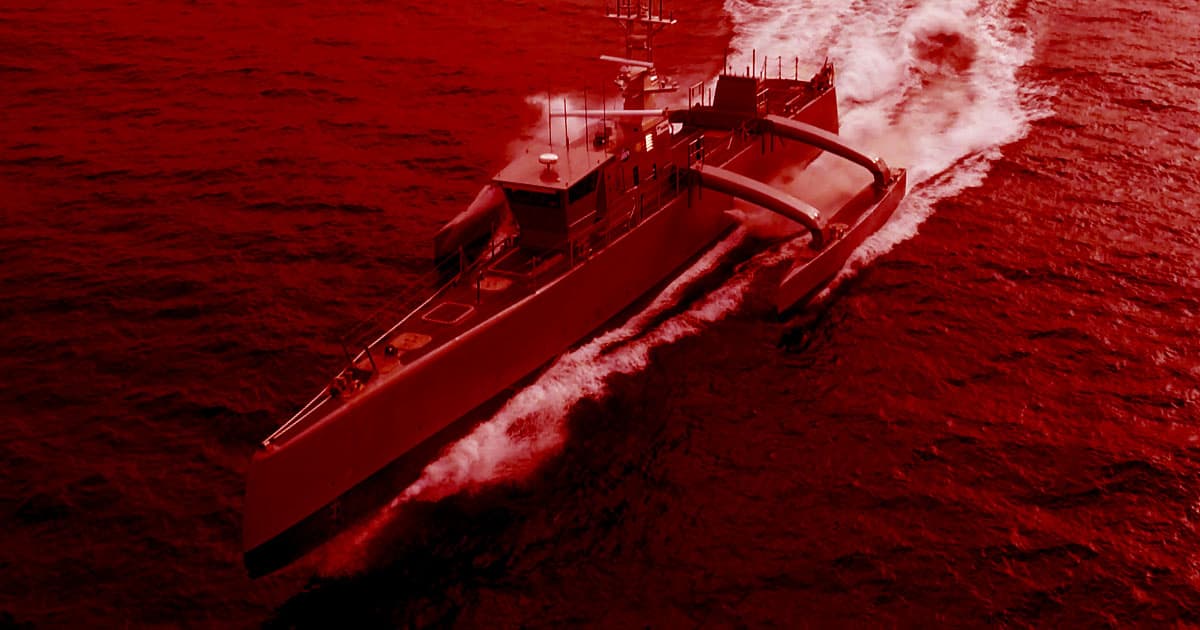 Defense News reports that the U.S. navy is planning to unleash unmanned surface combatants — military robot warships, basically — to accompany other boats that are controlled by a human crew.

The move may come in response to China and Russia's heavy investment in similar technologies that could put U.S. aircraft carriers at risk, according to Defense News' analysis. Naval superiority is a priority for the Chinese military — which the Pentagon wants to challenge with artificial intelligence and automation investments.

Last year's naval National Defense Strategy — when it was announced at the beginning of 2018 — was focused on backing up existing aircraft carriers and bolstering peacekeeping efforts. The new focus differs: smaller surface combatants, many of which will be unmanned, and equipped with state-of-the-art sensors.

The idea is to overwhelm the enemy and make it difficult for them to track a large number of smaller ships. Having a larger number of autonomous ships will also make sensor data collection more reliable and accurate.

"We want everything to be only as big as it needs to be. You make it smaller and more distributable, given all dollars being about equal," U.S. Navy Surface Warfare Director Ronald Boxall told Defense News in a December interview. "And when I look at the force, I think: ‘Where can we use unmanned so that I can push it to a smaller platform?'"

One such autonomous warship has already made headlines in the past: Defense Advanced Research Projects Agency's (DARPA) Sea Hunter is a submarine-hunting warship that can operate without humans on board for 60 to 90 days straight. Details are becoming more sparse about the Sea Hunter since the Navy recently classified any information about its future.

The U.S. navy is also moving to update the way it builds warships, and how computers and sensors on board function. The Navy wants all modern warships to be built around a single combat system that runs on every ship.

"For us to get faster, we either have to keep going with the model we had where we upgrade our flip phones, or we cross over the mentality to where it says: 'I don’t care what model of iPhone you have — 7 or X or whatever you have — it will still run Waze or whatever [applications] you are trying to run,” Boxall told Defense News.

Read This Next
"Hoodwinked"
New Pentagon Group Accused of Trying to "Bury" UFOs Again
Quantum Supremacy
US Sanctions Chinese Quantum Computing Firms for... Reasons
Quantum Solutions
Chinese Scientists Say They Now Have the World's Most Powerful Quantum Computer
Hmmmmmm
The Pentagon Just Released Its UFO Report
Drone Tanker News
The US Navy Just Used a Drone to Refuel a Fighter Jet in Midair
More on Robots & Machines
It's Nothing Pers...
7:15 PM on the byte
Scientists Create Shape-Shifting Robot That Can Melt Through Prison Bars
From the Dept. of...
12:00 AM on futurism
The Best Smart Lights of 2023
From the Dept. of...
Yesterday on futurism
The Best Mini Instant Pots of 2023
READ MORE STORIES ABOUT / Robots & Machines
Keep up.
Subscribe to our daily newsletter to keep in touch with the subjects shaping our future.
+Social+Newsletter
TopicsAbout UsContact Us
Copyright ©, Camden Media Inc All Rights Reserved. See our User Agreement, Privacy Policy and Data Use Policy. The material on this site may not be reproduced, distributed, transmitted, cached or otherwise used, except with prior written permission of Futurism. Articles may contain affiliate links which enable us to share in the revenue of any purchases made.
Fonts by Typekit and Monotype.