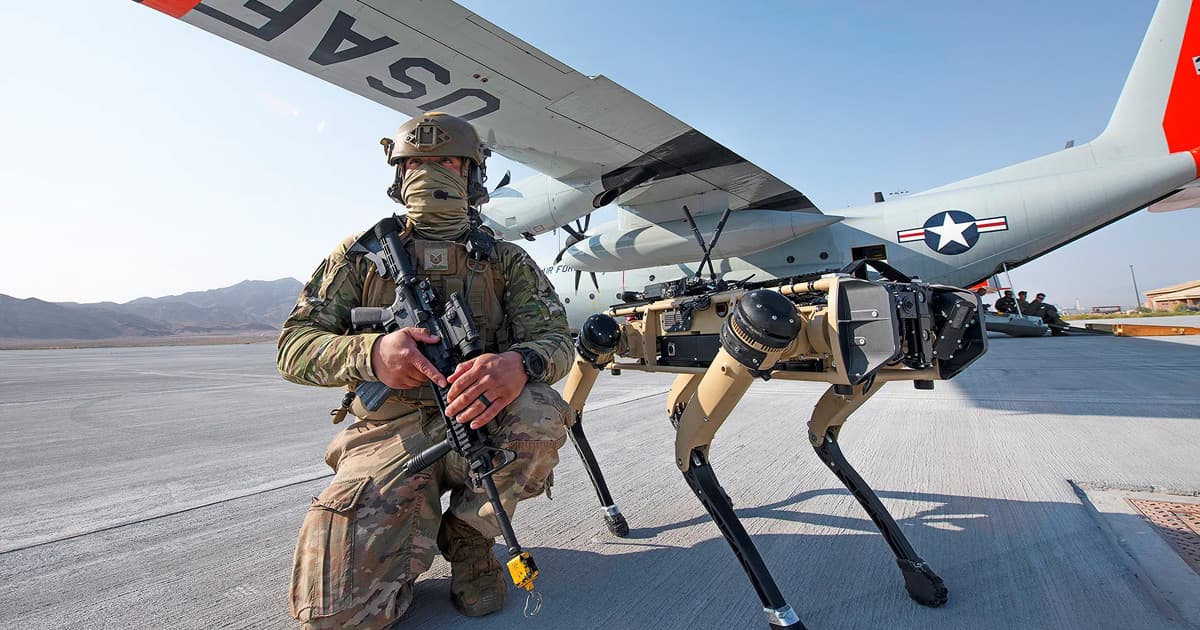 US Military Deploys Robot Dogs to Guard Air Force Base

The Air Force deployed four-legged "robot dogs" to defend its perimeters during a recent field test, The Drive reports.

The "robot dogs" the Air Force was testing are called Vision 60 and were built by Ghost Robotics, and they look a bit like the villains in the "Metalhead" episode of "Black Mirror." They're designed to conduct remote inspection, surveillance, or mapping missions, as The Drive reports, and could be used to patrol perimeters at air bases as well.

"Strategic partners can build solution-specific [Quadrupedal Unmanned Ground Vehicles] for virtually any use-case with their choice of sensors, radios and even size the robot to suit specific requirements by licensing our reference designs," according to Ghost Robotics' website.

The event was intended to stress test the Department of the Air Force's Advanced Battle Management System (ABMS), a sophisticated real-time information-sharing system.

"Future battlefields will be characterized by information saturation," Will Roper, Assistant Secretary of the Air Force for acquisition, technology and logistics, said in a statement. "One of the key objectives of this onramp was to present a dizzying array of information for participants to synthesize, just like they would see in a real operation."

The quadrupedal dogs are only a relatively small part of the Air Force's much larger ABMS. It's a pretty huge undertaking — the Air Force got $3.3 billion over five years to develop the battle management system.

"Modern warfare demands data and information at the edge, anywhere on Earth," said Chief of Space Operations John Raymond in the statement. "Potential adversaries are investing heavily in these fields, and we must exploit new approaches to sustain the advantage."

READ MORE: The Air Force Just Tested "Robot Dogs" For Use In Base Security [The Drive]

Can't See the Drones for the Swarms
This Theory Could Explain Many Military UFO Sightings
4. 16. 21
Read More
Dog Days
NYPD Robodog Involved in Arrest of Man With Gun
4. 15. 21
Read More
Adventure Time
See Boston Dynamics’ Robot Dog Tackle an Outdoor Obstacle Course
1. 24. 20
Read More
+Social+Newsletter
TopicsAbout UsContact Us
Copyright ©, Camden Media Inc All Rights Reserved. See our User Agreement, Privacy Policy and Data Use Policy. The material on this site may not be reproduced, distributed, transmitted, cached or otherwise used, except with prior written permission of Futurism. Articles may contain affiliate links which enable us to share in the revenue of any purchases made.
Fonts by Typekit and Monotype.