This Theory Could Explain Many Military UFO Sightings

It's a compelling argument. 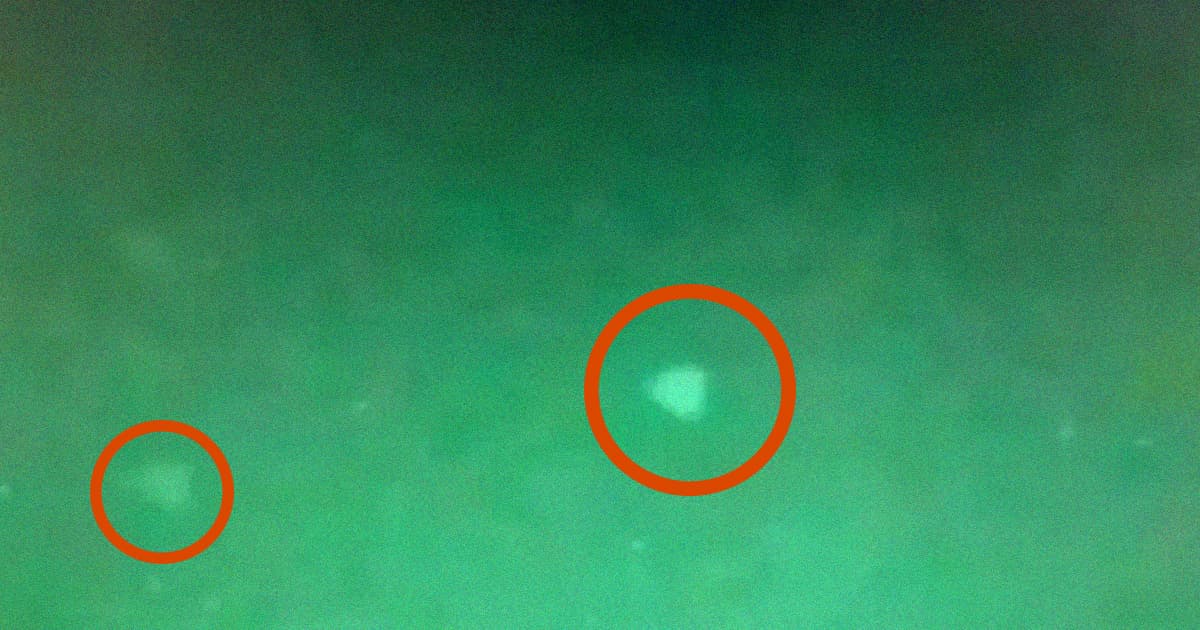 A fascinating clip of what appeared to be triangular or "pyramid" shaped UFOs flying over a US Navy warship circulated online earlier this month.

The footage, obtained by filmmaker Jeremy Corbell, shows the mysterious objects caught on a night vision camera aimed at the skies over the warship.

"I can confirm that the referenced photos and videos were taken by Navy personnel," Department of Defense spokesperson Sue Gough told Futurism last week.

The incident left plenty of questions unanswered. What were these stranger pyramid-shaped objects, or were they some type of optical illusion? If they were real, where did they come from?

To The Warzone creator Tyler Rogoway, the answer is obvious: the mysterious craft, and other military UFO sightings like them, are likely swarms of drones that belong to foreign adversaries, as detailed in a recent report for the site.

"Yes, I realize that the idea that an adversary is penetrating US military training areas unmolested, and has been for years, using lowly drone technology and balloons, is a big pill to swallow," Rogoway wrote, "but as one of the people who have repeatedly warned about the threat posed by lower-end drones for a decade... it isn't really surprising at all."

Rogoway decried the Pentagon's "utter lack of vision and early robust interest in regards to this emerging threat" and called out the Defense Department for "still playing catch-up when it comes to the realities surrounding the drone threat, and not just to its forces abroad, but also to the homeland overall."

In fact, he argues, the stigma surrounding UFOs only helped adversaries get away with hiding in plain sight inside American air space.

In his piece, Rogoway points to a number of compelling moments in history when not only foreign adversaries but the US itself invested in developing unmanned aircraft, including radar-reflecting balloons designed to confuse enemy radar systems.

In fact, a 1945 radar reflector patent of such a balloon looks strikingly like the pyramid-shaped objects that showed up in the UFO sighting earlier this month.

Rather than looking like the consumer-facing drones we are used to, Rogoway argues "there are far more configurations, some of which look downright alien and perform unlike a traditional fixed-wing aircraft or quadcopter."

Drone swarm technologies have also come a long way, allowing them to stay in the sky for significant periods of time, cover long distances, and pull off complex maneuvers in groups.

Thanks to America's obsession with UFOs, these reports often end up being discredited. Many pilots may even stop short of even reporting sightings due to fear of professional embarrassment.

"The fact that pilots have historically refrained from reporting unexplained craft in the skies due to fear of their careers being impacted is all you really need to know when quantifying how relevant and effective such a tactic can be," Rogoway argues.

So why are we starting to see more and more reports on UFOs? That may be in part to new technologies that can actually detect these drones. More data, in other words, means more sightings.

It's a compelling argument that could certainly explain some of the strange sightings made by Air Force pilots and Navy personnel over the last decades.

Rogozin claims that "at least one of our adversaries has made a mockery of us and compromised key capabilities using remarkably low-end technology."

By first admitting the US has a drone problem, he says, the Department of Defense can start piecing the pieces back together and get behind these UFO mysteries.

READ MORE: Adversary Drones Are Spying On The U.S. And The Pentagon Acts Like They're UFOs [The Warzone]

More on the sightings: Pentagon Confirms That Leaked Video Is Part of UFO Investigation

Read This Next
"Hoodwinked"
New Pentagon Group Accused of Trying to "Bury" UFOs Again
Alien Sunburn
Pentagon Whistleblower Hints That Pilots Who Encountered UFOs Had Radiation Burns
Alt Propulsion
NASA, DARPA, MIT Scientists Met to Discuss "Anti-Gravity" Tech
Hmmmmmm
The Pentagon Just Released Its UFO Report
Hiding in Plain Sight
Astrophysicist Says Alien UFO Theories Are Stupid
More on Robots & Machines
From the Dept. of...
12:00 AM on futurism
The Best Exercise Bikes of 2023
It's Nothing Pers...
Yesterday on the byte
Scientists Create Shape-Shifting Robot That Can Melt Through Prison Bars
From the Dept. of...
Yesterday on futurism
The Best Smart Lights of 2023
READ MORE STORIES ABOUT / Robots & Machines
Keep up.
Subscribe to our daily newsletter to keep in touch with the subjects shaping our future.
+Social+Newsletter
TopicsAbout UsContact Us
Copyright ©, Camden Media Inc All Rights Reserved. See our User Agreement, Privacy Policy and Data Use Policy. The material on this site may not be reproduced, distributed, transmitted, cached or otherwise used, except with prior written permission of Futurism. Articles may contain affiliate links which enable us to share in the revenue of any purchases made.
Fonts by Typekit and Monotype.