NYPD Robodog Involved in Arrest of Man With Gun 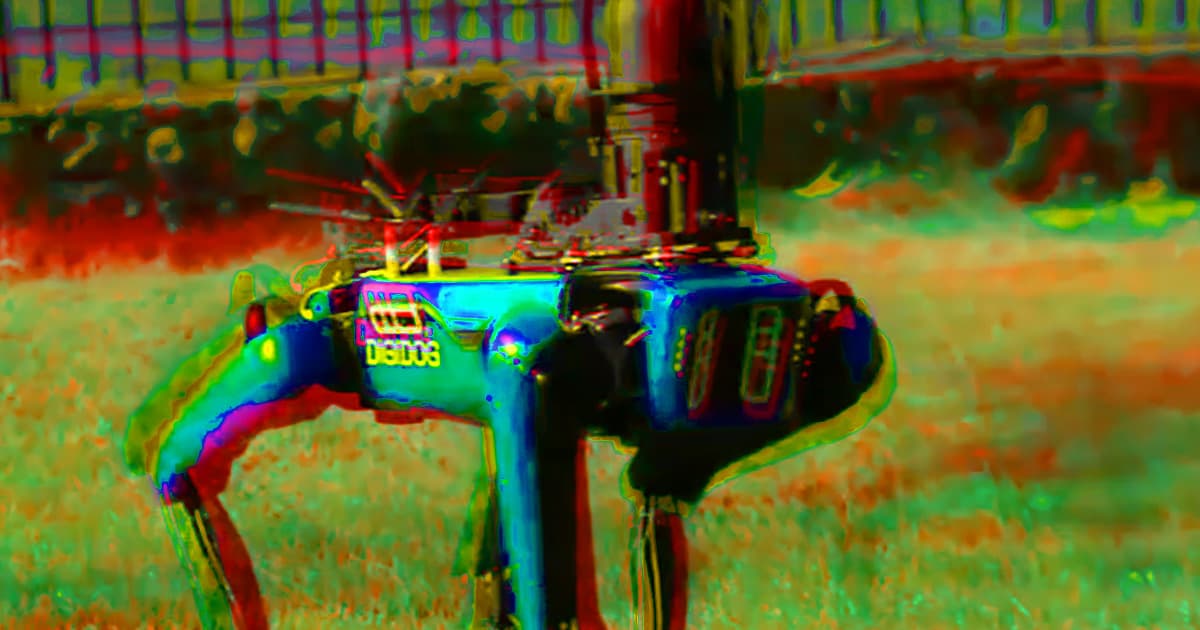 To the dismay of local residents, the New York City police department rolled out its newest toy earlier this week: a four-legged robot dog.

The robot, a modified Spot model manufactured by Boston Dynamics, made an appearance at a public housing building. Videos taken at the scene show the robot dog entering and exiting the building’s lobby.

Now, new details are emerging about the incident. Police have told The New York Times that the bot, dubbed “Digidog,” didn’t play an active role in the operation, but that a man who had a gun and was hiding in an apartment along with a woman and her baby was arrested on the scene.

The robodog may not have played an active role in the arrest, but having an armed police squadron deploy a robot to an active crime scene raises red flags about civil liberties and the future of policing.

Locally, the incident was met with outrage.

In the leadup to a mayoral election, candidates took the opportunity to voice their discontent as well.

“Rather than $70 million invested into saving residents from dangerous mold & lead paint, N.Y.C. creates another danger for Black and Latino residents?!” mayoral candidate and former MSNBC analyst Maya Wiley wrote in a tweet.

The American Civil Liberties Union (ACLU) has long called out the use of robot dogs by police enforcement as a gross overreach of power.

“One of the things that makes these robots so unnerving is that everybody implicitly understands that the possibility of weaponizing them will continue to hang out there like a tempting forbidden fruit for law enforcement,” senior policy analyst Jay Stanley wrote in a recent blog post for the ACLU. “There is also the fear that they could evolve from a remote-controlled tool to an autonomous decision-maker that makes actual law enforcement decisions of some kind.”

Boston Dynamics — which has repeatedly attempted to paint its robot in a more whimsical light by showing them go for a jog or complete a dance routine — maintains that there’s nothing wrong with having a remote controlled robotic dog accompany law enforcement.

As Michael Perry, Boston Dynamics’ VP of business development, told the Times, it’s only really willing to draw the line when it comes to arming its robots.

“We are adamant that we do not want our robots to be used in a way that harms people,” he told the newspaper.

Melanie Aucello, president of the tenant association at the building where the robot dog showed up this week, said that tenants there were being used as guinea pigs.

“We’re powerless,” she told NYT. “We’re like the scapegoats in society. To further read that they are trying it out and testing it out on us — everything that happens bad in our community happens here first.”

More on the incident: Outcry as Video Shows Robodog Patrolling With NYPD

Read This Next
Wait What
FCC Commissioner Says He’s Afraid of Robodogs and We Can’t Tell If He’s Joking
Bot Crime
Experts Shocked by Military Robodog With Sniper Rifle Attachment
Good Riddance
After Public Rage, NYPD Secretly Fires Robot Dog
Futurism
Outcry as Video Shows Robodog Patrolling With NYPD
Low Batt
Boston Dynamics Robot Runs Out of Battery During Military Combat Drill, Needs to Be Carried
More on Robots & Machines
FROM THE DEPT. OF...
4:00 PM on futurism
Best Smart Locks to Improve Your Home’s Security in 2022
Crap Fishing
Jan 15 on the byte
Model Says Company Started Selling Sex Doll of Her Without Her Knowledge
Drone Bombers
Jan 14 on the byte
Video Appears to Show Drug Cartel Using Drone to Bomb Enemies
READ MORE STORIES ABOUT / Robots & Machines
Keep up.
Subscribe to our daily newsletter to keep in touch with the subjects shaping our future.