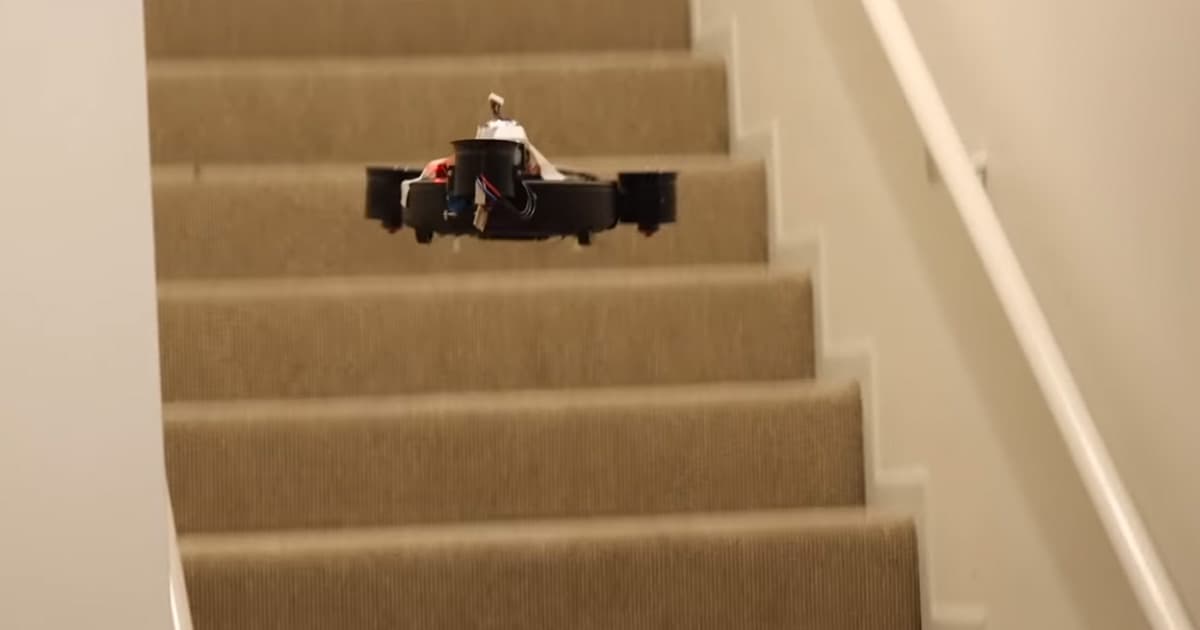 Finally, the advance in robotics that we've all been waiting for: a robot vacuum that can fly.

The flying Roomba, a creation of engineer and YouTuber Peter Sripol, isn't exactly useful, The Verge reports. But practicality doesn't seem to be the point here. Rather, the experimental robot comes across as an exercise in absurdity and — perhaps — an on-ramp to more helpful tech down the line.

The flying robot vacuum — a Roomba with drone propellers tacked on — can't go about cleaning a multiple-story home on its own. While the robot vacuums are famously autonomous, Sripol still needs to manually control it while it flies, according to The Verge, steering it up a flight of stairs like any other consumer drone.

Besides, you probably wouldn't want it to clean your home anyway. As Sripol quickly found out, the propellers kick up more of a mess than the Roomba cleaned in the first place, meaning the airborne vacuum needs to constantly scuttle after its own ever-growing mess.

Unholy Diver
Terrifying Humanoid Diving Robot With "Human" Sense of Touch Explores Shipwreck
Aug 1
Read More
FROM THE DEPT. OF THINGS TO BUY
Best Science Gifts of 2022
Jun 6
Read More
Drone Tanker News
The US Navy Just Used a Drone to Refuel a Fighter Jet in Midair
6. 7. 21
Read More
+Social+Newsletter
TopicsAbout UsContact Us
Copyright ©, Camden Media Inc All Rights Reserved. See our User Agreement, Privacy Policy and Data Use Policy. The material on this site may not be reproduced, distributed, transmitted, cached or otherwise used, except with prior written permission of Futurism. Articles may contain affiliate links which enable us to share in the revenue of any purchases made.
Fonts by Typekit and Monotype.