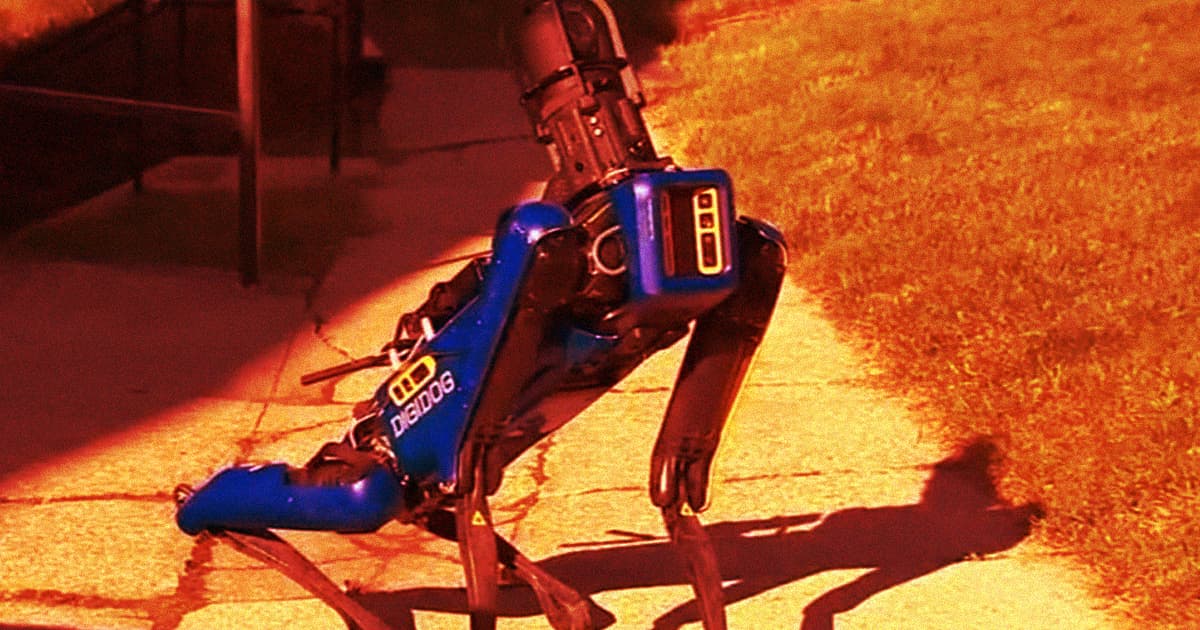 The sighting was met with outrage, with many bystanders audibly voicing their displeasure with the dystopian "Black Mirror"-like appearance.

"I ain't never seen nothing like this in my life," the person filming the video can be heard saying.

"What the fuck is this is the exact right reaction," she tweeted in response to the video.

It's still unclear how the NYPD is planning to make use of the robot. The video comes after several instances of police staff rolling out the robot dog in public streets.

"The NYPD has been using robots since the 1970s to save lives in hostage situations and hazmat incidents," the department tweeted in February. "This model of robot is being tested to evaluate its capabilities against other models in use by our Emergency Service Unit and Bomb Squad."

"We think that the military, to the extent that they do use robotics to take people out of harm’s way, we think that’s a perfectly valid use of the technology," Boston Dynamics’ VP of business development Michael Perry told The Verge.

The company's terms of service forbid the robot dog from being used to "to harm or intimidate any person or animal, as a weapon, or to enable any weapon."

Given the latest incidents, either Boston Dynamics either has a very loose definition of the word "intimidate" — or it simply isn't willing to enforce its terms of service.

It's also a bad look because the NYPD already has a very shaky image in the eyes of the public. Deploying a robot dog to its front lines will likely only alienate civilians even further.

Read This Next
Wait What
FCC Commissioner Says He's Afraid of Robodogs and We Can't Tell If He's Joking
Bot Crime
Experts Shocked by Military Robodog With Sniper Rifle Attachment
Good Riddance
After Public Rage, NYPD Secretly Fires Robot Dog
Dog Days
NYPD Robodog Involved in Arrest of Man With Gun
Low Batt
Boston Dynamics Robot Runs Out of Battery During Military Combat Drill, Needs to Be Carried
More on Robots & Machines
FROM THE DEPT. OF...
Jun 30 on futurism
Best Charging Stations in 2022
FROM THE DEPT. OF...
Jun 29 on futurism
Best Vintage Turntables in 2022
FROM THE DEPT. OF...
Jun 29 on futurism
Best Gaming Chairs Under $100
READ MORE STORIES ABOUT / Robots & Machines
Keep up.
Subscribe to our daily newsletter to keep in touch with the subjects shaping our future.
+Social+Newsletter
TopicsAbout UsContact Us
Copyright ©, Camden Media Inc All Rights Reserved. See our User Agreement, Privacy Policy and Data Use Policy. The material on this site may not be reproduced, distributed, transmitted, cached or otherwise used, except with prior written permission of Futurism. Fonts by Typekit and Monotype.