Boston Dynamics Robot Runs Out of Battery During Military Combat Drill, Needs to Be Carried 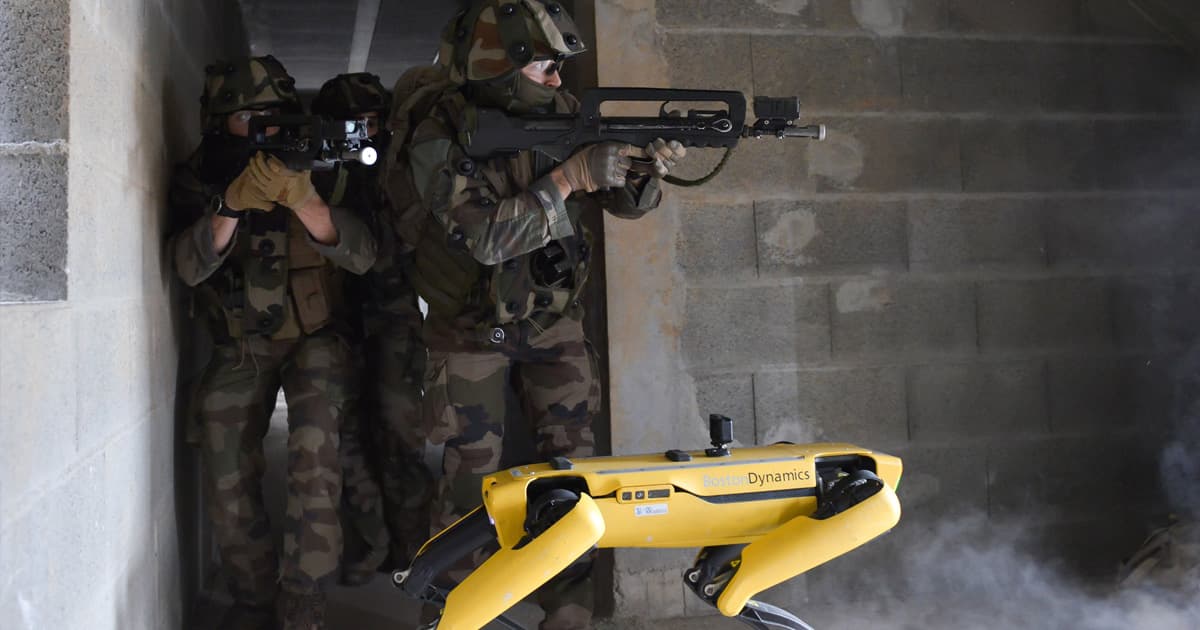 The French army's foremost military school, École Spéciale Militaire de Saint-Cyr, has shown off pictures of the latest addition to its team of combatants: a four-legged robotic dog called Spot, built by US firm Boston Dynamics.

Spot, alongside several other robots, was part of a two-day training exercise, and was reportedly used for reconnaissance.

Strangely, Boston Dynamics’ VP of business development Michael Perry told The Verge that the company had no idea about the exercise.

"We’re learning about it as you are," Perry told the outlet. "We’re not clear on the exact scope of this engagement."

After the publication of this story, a Boston Dynamics spokesperson reached out to clarify that although it wasn't aware of the specific training exercise, the company was aware that the French military was testing its robot.

During the exercise, soldiers simulated the capturing of a crossroads, defensive actions during night and day, and an urban-based combat test, according to French newspaper Ouest-France.

Spot didn't exactly make a positive impression. According to the newspaper, the robot ran out of juice during an exercise and had to be carried. A photo in the paper shows soldiers carrying the bot's inert body.

The news comes after Spot was seen patrolling the streets on behalf of the New York City Police Department in February.

The incidents paint a troubling picture of where the robot could be deployed next. Its forays into the battlefield shouldn't come as much of a shock: Boston Dynamics has a longstanding history in developing robots for the US army.

The robot's terms and conditions of sale forbid it from being used "to harm or intimidate any person or animal, as a weapon, or to enable any weapon."

"We think that the military, to the extent that they do use robotics to take people out of harm’s way, we think that’s a perfectly valid use of the technology," Perry told The Verge.

But it seems as though Boston Dynamics has already lost track of how its robots are being deployed — which isn't reassuring.

Besides, if anything were to go wrong, who will hold the blame?

Whether being used for reconnaissance or in active combat, Spot's future is anything but certain. Let's just hope military forces around the world aren't tempted to mount guns on the robot dog's back.

Editor's note 4/9/2021: Added a comment from a Boston Dynamics spokesperson clarifying that the company was in fact aware that the French military was testing its Spot robot, although it wasn't aware of this specific exercise.

Read This Next
Quacks Like a Duck
Watching Elon Musk's Robot Back to Back With Boston Dynamics Is... Something
Wait What
FCC Commissioner Says He's Afraid of Robodogs and We Can't Tell If He's Joking
Bot Crime
Experts Shocked by Military Robodog With Sniper Rifle Attachment
Good Riddance
After Public Rage, NYPD Secretly Fires Robot Dog
Dog Days
NYPD Robodog Involved in Arrest of Man With Gun
More on Robots & Machines
FROM THE DEPT. OF...
Dec 1 on futurism
The Best Wired Earbuds in 2022
FROM THE DEPT. OF...
Dec 1 on futurism
The Best Gifts For Gamers in 2022
Egg Drop
Dec 1 on the byte
Former NASA Guy Drops Egg Out of Space, Tries to Keep It From Breaking
READ MORE STORIES ABOUT / Robots & Machines
Keep up.
Subscribe to our daily newsletter to keep in touch with the subjects shaping our future.
+Social+Newsletter
TopicsAbout UsContact Us
Copyright ©, Camden Media Inc All Rights Reserved. See our User Agreement, Privacy Policy and Data Use Policy. The material on this site may not be reproduced, distributed, transmitted, cached or otherwise used, except with prior written permission of Futurism. Articles may contain affiliate links which enable us to share in the revenue of any purchases made.
Fonts by Typekit and Monotype.