See a Haunting Vision of the War Machines of the Future 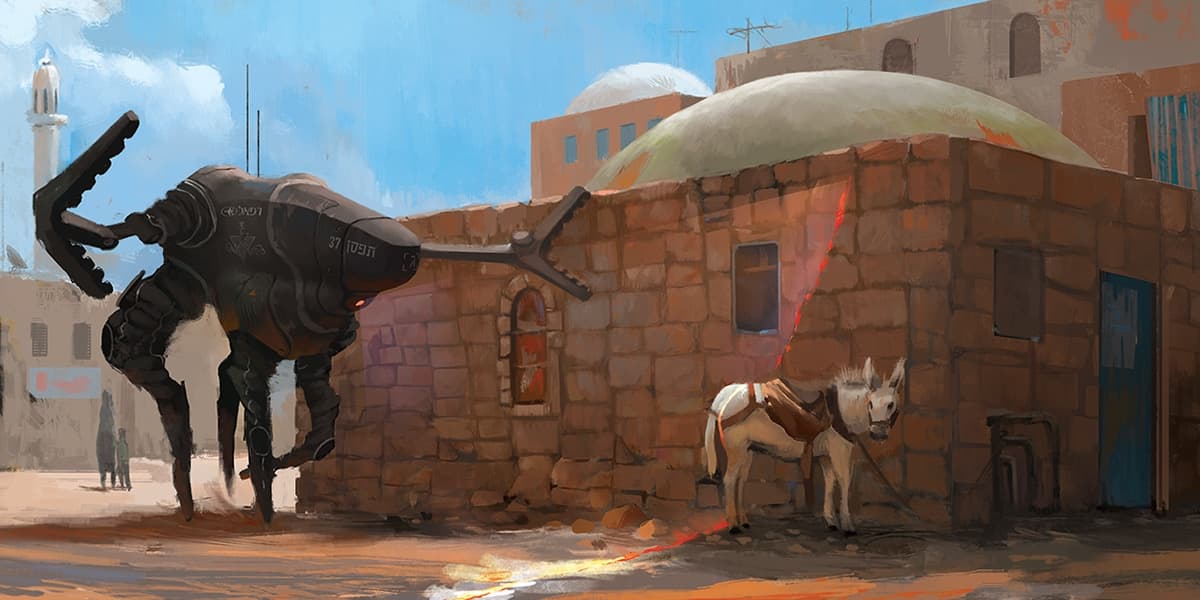 Do you want to know what war would look like in 2048? The Israeli artist Pavel Postovit has drawn a series of remarkable images depicting soldiers, robots, and mechs – all in the service of the Israeli army in 2048. He even drew aerial ships resembling the infamous Triskelion from The Avengers (which had an unfortunate tendency to crash every second week or so).

Pavel is not the first artist to make an attempt to envision the future of war. Jakub Rozalski before him tried to reimagine World War II with robots, and Simon Stalenhag has many drawings that demonstrate what warfare could look like in the future. Their drawings, obviously, are a way to forecast possible futures and bring them to our attention.

Pavel’s drawings may not be based on rigorous foresight research, but they don’t have to be. They are mainly focused on showing us one way the future may be unfurled. Pavel himself does not pretend to be a futures researcher, and told me that –

“I was influenced by all kind of different things – Elysium, District 9 [both are sci-fi movies from the last few years], and from my military service. I was in field intelligence, on the border with Syria, and was constantly exposed to all kinds of weapons, both ours and the Syrians.”

Here are a couple of drawings to make you understand Pavel’s vision of the future, divided according to categories I added. Be aware that the last picture is the most haunting of all.

Mechs in the Battlefield

Mechs are a form of ground vehicles with legs – much like Boston Dynamic’s Alpha Dog, which they are presumably based on. The most innovative of those mechs is the DreamCatcher – a unit with arms and hands that are used to collect “biological intelligence in hostile territory.” In one particularly disturbing image, we can see why it’s called “DreamCatcher,” as the mech beheads a deceased human fighter and takes the head for inspection.

Apparently, mechs in Pavel’s future are working almost autonomously – they can reach hostile areas on the battlefield and carry out complicated tasks on their own.

Soldiers in the field will be companied by aerial drones. Some of the drones will be larger than others – the Tinkerbell, for example, can serve both for recon and personal CAS (Close Air Support) for the individual soldier.

Other aerial drones will be much smaller and will be deployed as a swarm. The Blackmoth, for example, is a swarm of stealthy micro-UAVs used to gather tactical intelligence on the battlefield.

Throughout Pavel’s visions of the future, we can see a repeated pattern: the technological prowess of the West is going to collide with the simple lifestyle of natives. Since the images depict the Israeli army, it’s obvious why the machines are essentially fighting or constraining the Palestinians. You can see in the images below what life might look like in 2048 for Arab civilians and combatants.

Another interesting picture shows Arab combatants dealing with a heavily armed combat mech by trying to make it lose its balance. At the same time, one of the combatants is sitting to the side with a laptop – presumably trying to hack into the robot.

If the images above have made you feel somewhat shaken, don’t worry – it’s perfectly normal. You’re seeing a new kind of warfare, in which robots take extremely active parts against human beings. That’s war for you: brutal and horrible, and there’s nothing much to do against that. If robots can actually minimize the amount of suffering on the battlefield by replacing soldiers, and by carrying out tasks with minimal casualties for both sides – it might actually be better than the human-based model of war.

Perhaps that is why I find the last picture the most horrendous one. You can see in it a combatant, presumably an Arab, with a bloody machete next to him and two prisoners that he’s holding in a cage. The combatant is reading a James Bond book. The symbolism is clear: this is the new kind of terrorist / combatant. He is vicious, ruthless, and well-educated in Western culture – at least well enough to develop his own ideas for using technology to carry out his ideology. In other words, this is an ISIS combatant, who begin to employ some of the technologies of the West like aerial drones, without adhering to moral theories that restrict their use by nations.

The future of warfare in Pavel’s vision is beginning to leave the paradigm of human-on-human action and is rapidly moving into robotic warfare. It is very difficult to think of a military future that does not include robots in it. We should start thinking right now about the consequences, and how (and whether) we can imbue robots with sufficient autonomous capabilities to carry out missions on their own, while still minimizing casualties on the enemy side.

You can check out the rest of Pavel’s (highly recommended) drawings at THIS LINK.

Read This Next
Diner Drama
People Furious at Robot Serving Pancakes at Denny's
Robot Violence
YouTube Accidentally Removed Robot Battle Videos for "Animal Cruelty"
Buzz Off
Tiny Spies: This Insect-Like Flying Robot is Smaller Than a Penny
Automating Gym Class
Toyota's Basketball Robot Can Nail Three-Pointers
Guardian Exoskeleton
The U.S. Military is Buying a Brutal-Looking Powered Exoskeleton
More on Robots & Machines
FROM THE DEPT. OF...
Thursday on futurism
The Best AV Receivers in 2022
FROM THE DEPT. OF...
Wednesday on futurism
The Best Air Purifiers of 2022
FROM THE DEPT. OF...
Tuesday on futurism
The Best Budget 3D Printers for 2022
READ MORE STORIES ABOUT / Robots & Machines
Keep up.
Subscribe to our daily newsletter to keep in touch with the subjects shaping our future.
+Social+Newsletter
TopicsAbout UsContact Us
Copyright ©, Camden Media Inc All Rights Reserved. See our User Agreement, Privacy Policy and Data Use Policy. The material on this site may not be reproduced, distributed, transmitted, cached or otherwise used, except with prior written permission of Futurism. Articles may contain affiliate links which enable us to share in the revenue of any purchases made.
Fonts by Typekit and Monotype.