It’s not controlled by an AI yet, but if some marines have their way, it will be. 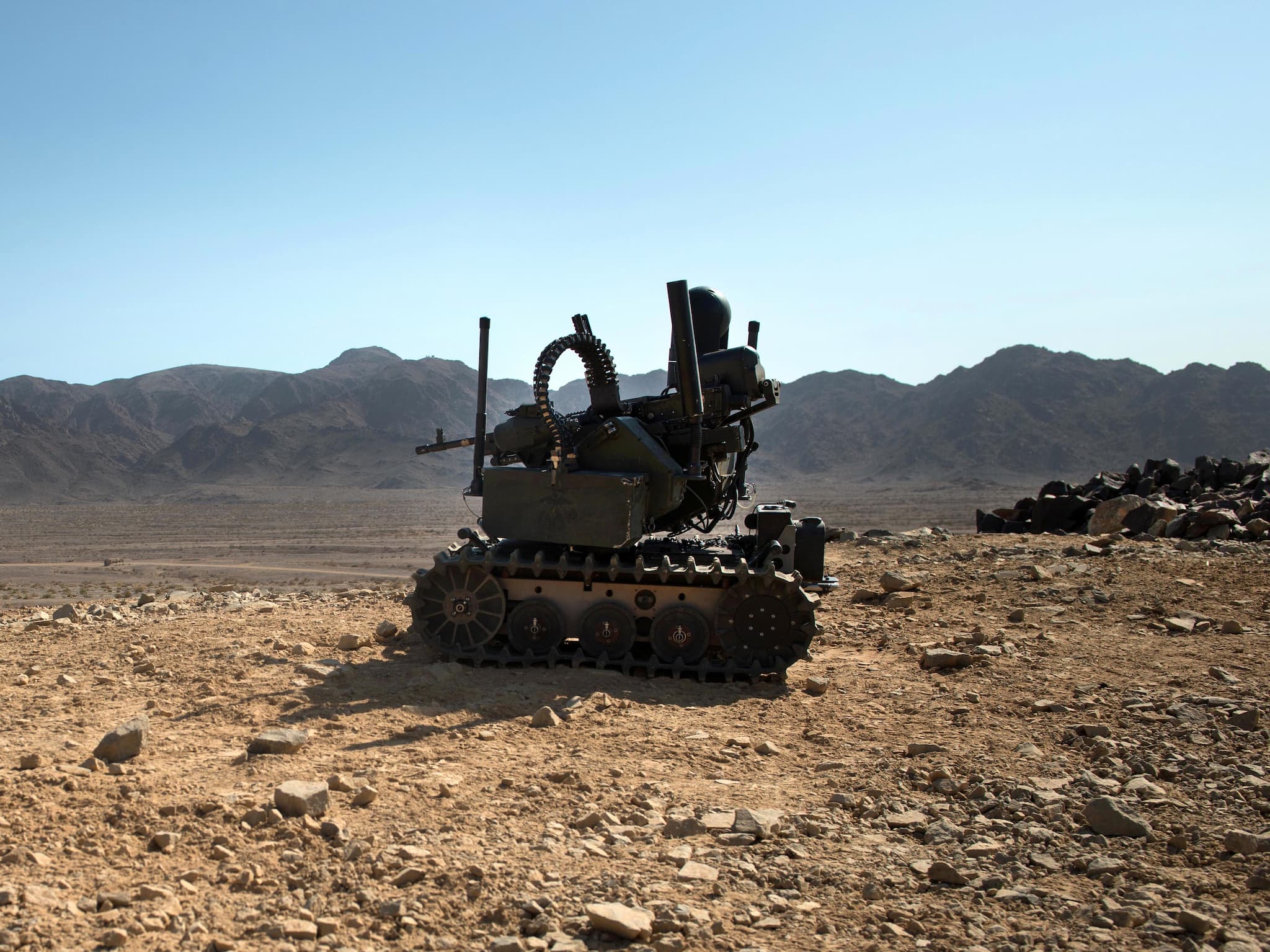 Few images of war are as iconic as the 1944 storming of the beach at Normandy, but due to new military technologies, tomorrow's version of D-Day will undoubtedly look much different. Weaponized drones will likely fill the air, and instead of soldiers streaming out of the water, we could see amphibious hovercrafts that move as quickly across the land as they do the sea. Aboard those craft might be the latest high-tech military tool, the Multi-Utility Tactical Transport (MUTT).

Each MUTT is roughly the size of an ATV and is operated remotely using a joystick and tablet. General Dynamics designed the vehicles to transport food, water, and other supplies, and the Marines recently tested MUTTs with a far more powerful piece of cargo on board: a .50-caliber machine gun.

With a series of cameras and sensors providing accurate imaging and heavy-duty tracks that have no trouble navigating across rough terrain, MUTTs could prove to be an invaluable military tool, particularly in conditions that would be extremely hostile for soldiers to navigate. As one soldier told Business Insider, "It's a mobile platform where it doesn't get fatigued. It doesn't need water. It needs very little maintenance, and it's always in the fight, so that's a great asset to have."

A remote-controlled MUTT does clearly have several advantages over a similarly equipped soldier, but according to a senior Marine officer, the military isn't content with the system as it currently stands.

"Eventually, what we hope to do is go to systems that are more truly autonomous, that I can say, 'Hey, go cover my right flank,' and it's going to go do the things it needs to do in order to make that happen," the officer told Business Insider. "And then if it does get in the situation where the weapons systems malfunction, it can either fix itself or then I've got to send a marine to go fix it."

The idea of an autonomous system armed with a machine gun having its "weapons systems malfunction" will no doubt worry Elon Musk, Stephen Hawking, and the thousands of others who signed an open letter calling for a ban on autonomous weapons. They assert that we need to draw a distinct line between a robot directly controlled by a human — like these current MUTTs — and ones that operate autonomously.

"Autonomous weapons are ideal for tasks such as assassinations, destabilizing nations, subduing populations, and selectively killing a particular ethnic group. We therefore believe that a military AI arms race would not be beneficial for humanity," the letter reads. "There are many ways in which AI can make battlefields safer for humans, especially civilians, without creating new tools for killing people."

Unless a ban is enacted, however, there's nothing stopping the military from pursuing such tech advancements. Even if the practice does become illegal in one nation, that wouldn't necessarily prevent others from developing such tech. Truly, the wars of the future will look much different, but whether those differences keep us safer or not is still up for debate.

Read This Next
"Hoodwinked"
New Pentagon Group Accused of Trying to "Bury" UFOs Again
Hmmmmmm
The Pentagon Just Released Its UFO Report
Crush Depth
Debris Found From Missing Submarine, All Crew Presumed Dead
Found Footage
Pentagon Confirms That Leaked Video Is Part of UFO Investigation
Killer Copter
Middle Eastern Nation First to Buy Drone Armed With Machine Gun
More on Robots & Machines
Robot Arm News
Yesterday on the byte
European Space Agency Shows Off Concept for Martian Sample Picker-Upper
From the Dept. of...
Yesterday on futurism
The Best Desk Lamps of 2023
Robot Ridicule
Jan 28 on the byte
Hilarious Video Shows Boston Dynamics Robot Failing Horribly
READ MORE STORIES ABOUT / Robots & Machines
Keep up.
Subscribe to our daily newsletter to keep in touch with the subjects shaping our future.
+Social+Newsletter
TopicsAbout UsContact Us
Copyright ©, Camden Media Inc All Rights Reserved. See our User Agreement, Privacy Policy and Data Use Policy. The material on this site may not be reproduced, distributed, transmitted, cached or otherwise used, except with prior written permission of Futurism. Articles may contain affiliate links which enable us to share in the revenue of any purchases made.
Fonts by Typekit and Monotype.