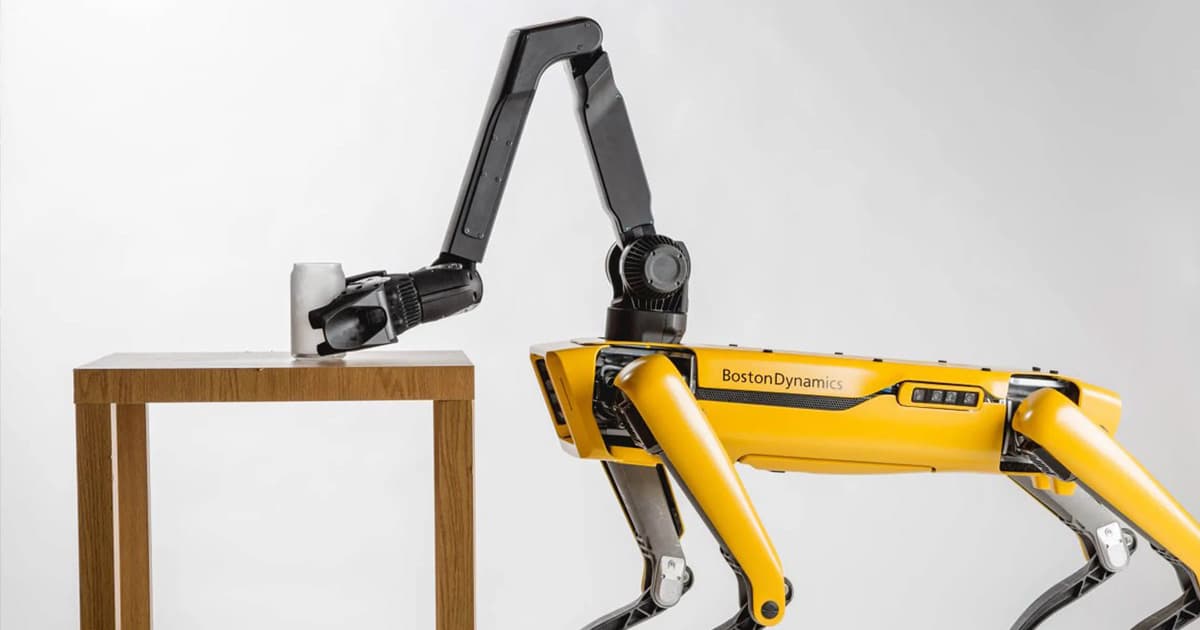 Oh No: Boston Dynamics Will Start Selling Arms For Its Robodogs

Even robot dogs have the right to bear arms.

Even robot dogs have the right to bear arms.

Boston Dynamics is getting ready to start selling a whole lineup of accessories for its robodog extraordinaire Spot, including charging bricks, camera kits — and even a prehensile arm that attaches to the robot's "head."

The robot went on sale to the public for $75,000 apiece last year. The robodog has found plenty of jobs since then, from completing mundane tasks like doing night rounds at an oil rig all the way to becoming a remotely controlled doctor on four legs.

But with a retractable arm, Spot is about to become even more useful. In fact, as we've already seen in videos released by Boston Dynamics in 2018, such an arm allows it to open doors — even if a concerned human were to get in its way.

The arm is arriving at some point early next year, TechCrunch reports. It has six degrees of freedom and moves according to the movement of the robot dog it's attached to.

"Like the base robot, there’s much more to the arm than just hardware," the company wrote in a description, according to TechCrunch. "It will ship with an intuitive UI, and be equipped to operate through both telemanipulation and supervised autonomous behaviors via the tablet."

Boston Dynamics is also planning to release a Spot robot that's meant for enterprise applications, which will include a self-charging dock.

Such a dock gives it the ability to complete its tasks completely autonomously in dangerous areas such as radiation-heavy zones that are too dangerous for a human caretaker.

READ MORE:Boston Dynamics’ Spot is getting an arm and self-charging dock next year [TechCrunch]