We tried to ask him some questions, but he was very evasive. 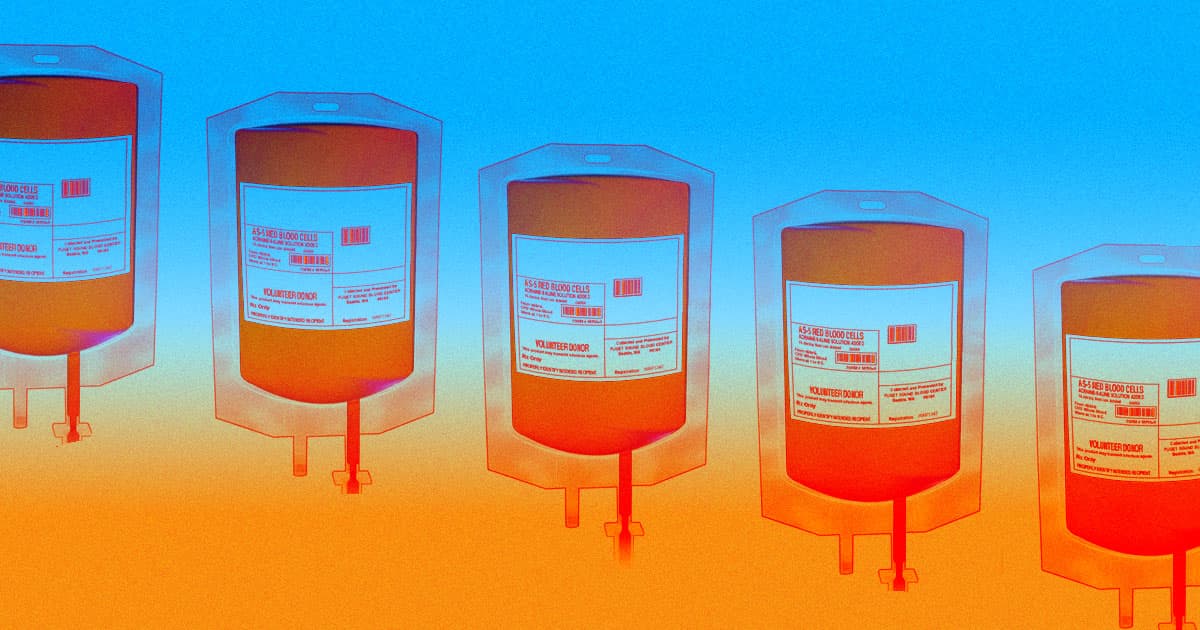 In February 2019, the FDA issued a warning: medical clinics offering transfusions of blood from young people as anti-aging treatments were likely scams, based on dangerous pseudoscience. The warning spelled doom for Ambrosia, LLC, a young blood transfusion clinic that shut down soon afterward.

Now, Ambrosia founder Jesse Karmazin is back. Last month, the Stanford-alum-turned-blood-tech-guru (sound familiar?) contacted Futurism to announce the foundation of his new clinic, Ivy Plasma. This time, Karmazin said the clinic will provide plasma transfusions — no longer specifically sourced from young folks — and it would do so off-label, meaning the transfusions would be administered for purposes the FDA didn't explicitly approve and endorse.

Asked what the purported benefits of the treatment might be, Karmazin's response was evasive.

"Off-label prescribing is legal, however the FDA does not permit companies to discuss the potential benefits or risks of off-label medications, sorry," Karmazin wrote in an email responding to Futurism's questions.

The FDA currently approves the use of plasma transfusions in emergency situations. But in its February warning, it listed possible side effects of young-blood transfusions ranging from infections and allergic reactions to lung injury and circulatory problems. The FDA didn't reply to questions about Ivy Plasma or provide an updated statement on plasma transfusions (though, of note, it has been argued that the FDA retains the ability to levy a selective "functional ban" on off-label uses).

As for the theoretical benefits of young plasma transfusions, the FDA warned in February that "plasma is not FDA-approved to treat other conditions such as normal aging or memory loss. Additionally, there have not been any well-controlled studies that show the clinical benefit of the administration of plasma from young donors, and there are associated safety risks."

Why, then, do people think young plasma would slow down aging?

One recent study showed human brain cells grown in a petri dish and treated with two proteins found in the blood of young mice grew more branches and formed more connections with other cells than those that weren't. Mouse studies lent more evidence to the idea that young blood has rejuvenative properties.

But medical research conducted on animals often fails to translate to clinical relevance — as of yet, there's no conclusive evidence showing the phenomenon working for humans as it does in mice. Some groups have run human experiments, but they involved such a small number of participants that their findings weren't definitive. One Stanford study found Alzheimer's patients better able to perform daily tasks (like taking medications) after getting a young blood transfusion. But the entire study only included 18 participants, and there was no reported improvement in their moods or other cognitive abilities.

Because of that lack of evidence, the FDA hasn't approved clinical treatments with young plasma, which is why Ivy Clinic offers off-label services (and can't claim medical benefits). But over the course of the two weeks that Futurism was in contact with Karmazin — all over email, because he says he doesn't provide formal phone interviews to the press — the mystery surrounding the new clinic only grew.

Karmazin told Futurism that he believes reporters got a lot wrong about Ambrosia. He pushed back on the suggestion his company was broadly controversial, while also declining to explain what specifically he felt had been incorrect about past press coverage.

When asked if he, as an actual doctor, still believed that plasma transfusions have anti-aging effects, Karmazin explained that because he was CEO of Ivy Plasma, the FDA's restrictions on the marketing of off-label medications still prevented him from commenting.

"I really do try both to adhere to the FDA's rules and run my businesses in the best interests of our patients," Karmazin told Futurism.

Ivy Plasma's website says that the company offers treatments in San Francisco, California and Tampa, Florida. The prices are the same as they were for Ambrosia's patients: $8,000 for one liter of plasma and $12,000 for two liters, all of which Karmazin told Futurism is sourced from blood banks.

When he talked about Ivy Plasma itself, Karmazin described outpatient clinics "staffed by doctors and nurses mostly." But he repeatedly refused to answer questions about those staffers, the treatments they offer, or the process of setting up medical clinics in either city, citing privacy concerns.

All in all, it's a tough sell. Ivy Plasma offers prohibitively-expensive treatments, supported by weak science, and technically can’t claim that they do any good for people. As such, it would be easy to write it off as some weird quirk of Silicon Valley, a peculiar medical trend for wealthy geeks.

But Ambrosia's messaging is still out there, even if the clinic itself was dissolved. The high price tag also suggests that these plasma treatments are aimed at the rich — people for whom an $8,000 liter of blood bank-sourced plasma is affordable. Tech billionaires seem obsessed with extending their own lives as long as possible, an endeavor with which experimental blood treatments fall perfectly in line.

It seems like a story distinctly of the moment, but it's not. The ages-old trope of a fountain of youth for the most privileged of the privileged among us continues apace. But try, if you will, to imagine a world where the people who have hoarded enough cash to create change at a society-wide scale focused less on extending their own lives and the maybe-kinda-supposed science of plasma transfusions, and instead dedicated their resources to the kind of wide-reaching medical research that could improve the lives of billions around the globe.

At the very least, it'd be a new story.

More on plasma treatments: New Chain of Clinics Will "Fill Your Veins" With Blood of Youths