Elon Musk Meeting With Advertisers, Begging Them Not to Leave Twitter

"Those type of provocations are not helping to calm the waters." 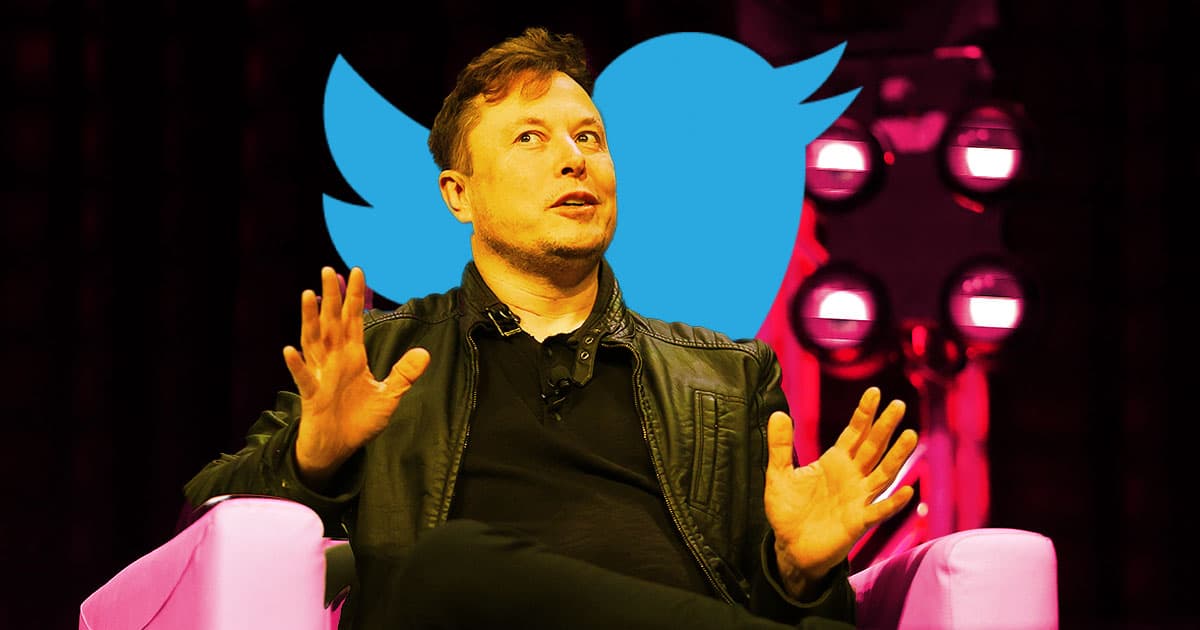 Advertisers are fleeing Twitter in droves now that Tesla and SpaceX CEO Elon Musk has taken over control.

Ever since officially closing the $44 billion deal, Musk has been busy gutting the company's executive suite and dissolving its board. Senior executives, as well as Twitter's advertising chief Sarah Personette, have departed as well.

After all, Musk has been very clear about his disdain for advertising for years now.

The resulting uncertainty has advertisers spooked — major advertising holding company IPG has already advised clients to pull out temporarily — and the billionaire CEO is in serious damage mode.

Now, Reuters reports, Musk is spending most of this week meeting with advertisers in New York, trying to reassure them that Twitter won't turn into a "free-for-all hellscape."

According to one of Reuters' sources, the meetings have been "very productive" — but plenty of other marketers are far from satisfied.

Advertisers are reportedly grilling Musk over his plans to address the rampant misinformation being spread on the platform, a trend that Musk himself has been actively contributing to since the acquisition.

And if he's succeeding in ameliorating advertisers in private, he's antagonizing them publicly. On Wednesday, Musk posted a poll asking users whether advertisers should support either "freedom of speech," or "political 'correctness'" — a type of false dichotomy that echoes the rhetoric of far-right conspiracy theorists and conservative pundits.

"Those type of provocations are not helping to calm the waters," an unnamed media buyer told Reuters.

Some are going public with the same sentiment.

"Unless Elon hires new leaders committed to keeping this 'free' platform safe from hate speech, it's not a platform brands can/should advertise on," Allie Wassum, global media director for the Nike-owned shoe brand Jordan, wrote in a LinkedIn post.

So far, Musk's plans for the social media platform remain strikingly muddy. In addition to the behind-the-scenes advertising plays, he's also announced that users will have to pay to retain their verification badge, though he's engaged in a comically public negotiation as to what the cost might be.

He's also hinted that previously banned users — former US president Donald Trump chief among them — might eventually get a chance to return, but only once "we have a clear process for doing so, which will take at least a few more weeks."

The move was seen by many as a way to wait out the impending midterm elections. After all, Twitter has played a huge role in disseminating misinformation and swaying elections in the past.

While advertisers are running for the hills, to Musk advertising is clearly only a small part of the picture — even though historically, social giants like Twitter have struggled to diversify their revenue sources much beyond display ads.

Musk nodded to that reality in a vague open letter posted last week.

"Low relevancy ads are spam, but highly relevant ads are actually content!" he wrote in the note, addressed to "Twitter advertisers."

Big picture, Twitter's operations are in free fall right now and Musk has yet to provide advertisers with a cohesive plan to pick up the pieces.

While he's hinted at the creation of a new content moderation council made up of both "people from all viewpoints" and "wildly divergent views," advertisers are clearly going to be thinking twice about continuing their business with Twitter.

With or without advertising, Twitter's finances are reportedly in a very deep hole. The billions of dollars Musk had to borrow to finance his mega acquisition will cost Twitter around $1 billion a year in interest alone.

The company also wasn't anywhere near profitable before Musk took over, losing hundreds of millions of dollars in a single quarter.

Whether that picture will change any time soon is as unclear as ever, especially in the face of a wintry economy.

But, of course, Musk has proved his critics wrong before. So anything's possible.

More on the saga: Elon Musk Pulling Engineers From Tesla Autopilot to Work on Twitter