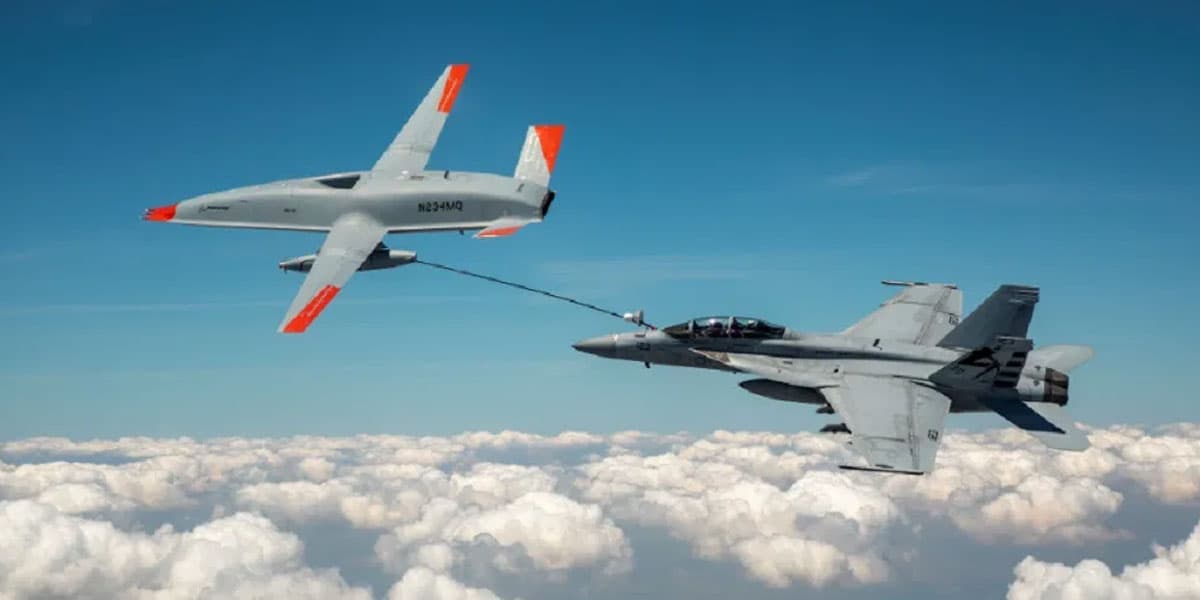 A drone just refueled a US fighter jet in midair for the first time, the US Navy announced today.

An uncrewed MQ-25 Stingray, a drone purpose-built for aerial refueling that flew for the first time in September 2019, refueled the Navy's F/A-18 Super Hornet fighter jet after being launched from the MidAmerica Airport in Mascoutah, Illinois.

The successful test goes to show that uncrewed military aircraft may be able to serve new purposes beyond simply completing reconnaissance missions or wiping out targets. It also frees up the Navy's expensive crewed fighter jets for other tasks.

During the flight, the two aircraft got within just 20 feet from each other. The Stingray then extended a hose, which the Super Hornet then connected with to receive fuel.

"This flight lays the foundation for integration into the carrier environment, allowing for greater capability toward manned-unmanned teaming concepts," said Brian Corey, rear admiral, who oversees the Navy's Program Executive Office for Unmanned Aviation and Strike Weapons, in a statement.

Chad Reed, program manager for the Navy’s Unmanned Carrier Aviation program office, called the event "a significant and exciting moment for the Navy."

"This is our mission, an unmanned aircraft that frees our strike fighters from the tanker role, and provides the Carrier Air Wing with greater range, flexibility and capability," Reed added.

The same drone will now be used for several other testing flights in the coming months.

More on drones: The US Military Is Looking for a Drone-Killing Bazooka

FROM THE DEPT. OF THINGS TO BUY
The Best Science Gifts of 2023
10. 19. 22
Read More
Drone Tanker News
The US Navy Just Used a Drone to Refuel a Fighter Jet in Midair
6. 7. 21
Read More
Found Footage
Pentagon Confirms That Leaked Video Is Part of UFO Investigation
4. 9. 21
Read More
+Social+Newsletter
TopicsAbout UsContact Us
Copyright ©, Camden Media Inc All Rights Reserved. See our User Agreement, Privacy Policy and Data Use Policy. The material on this site may not be reproduced, distributed, transmitted, cached or otherwise used, except with prior written permission of Futurism. Articles may contain affiliate links which enable us to share in the revenue of any purchases made.
Fonts by Typekit and Monotype.