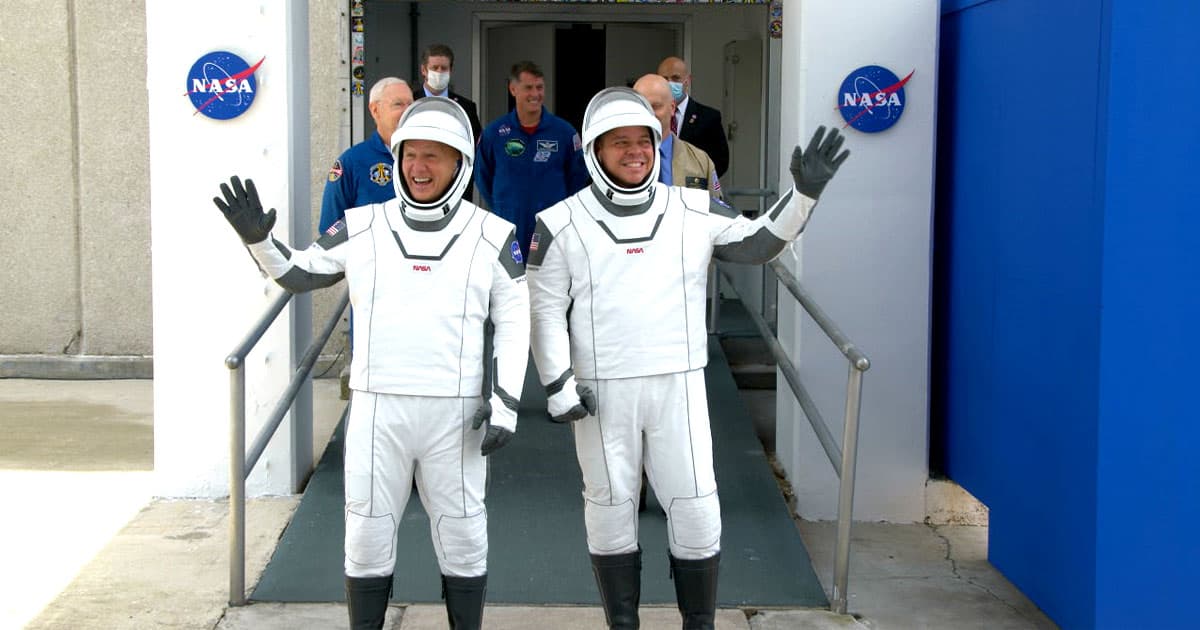 On Wednesday, SpaceX was set to launch a pair of NASA astronauts into space for the first time, before less-than-favorable weather conditions forced Mission Control to scrub the historic launch.

The Elon Musk-led space company put on a big show. Clad in futuristic space suits courtesy of SpaceX, NASA astronauts Bob Behnken and Doug Hurley got the red carpet treatment as they made their way to a NASA logo-adorned Tesla Model X that drove them to the historic launch complex 39A at the Kennedy Space Center in Florida.

But not everybody is happy with the glamorous spacesuit design.

"This is the International Space Station, not Everlane!" Watamanuk added, pointing out that "in some ways, the design feels deliberately trend-adverse, paying no mind to contemporary style or even the larger world of design."

Other fashionistas were kinder to the design.

"Actually, what the SpaceX suits evoke most of all is James Bond’s tuxedo if it were redesigned by Tony Stark as an upgrade for ['Star Trek' captain] James T. Kirk’s next big adventure," Vanessa Friedman, chief fashion critic for The New York Times, wrote in a Thursday commentary piece.

"They do not have the dangling hoses, knobs and wires of the traditional suits," she added.

The suit's designer is Jose Fernandez, a Hollywood veteran who worked on movies including "The Avengers" and "Batman v Superman." The flashy design was reverse-engineered to meet space travel requirements — not the other way around.

But speaking of dangling hoses and knobs, NASA's own take for its upcoming Artemis missions to the Moon looks strikingly different. The agency's Orion Crew Survival System suit features a traffic pylon-orange design with NASA-blue trim.

The boots look like a pair of futuristic Adidas. The helmet evokes the Apollo missions. And the gloves could basically be worn snowboarding, from a purely aesthetic point of view.

It's liquid cooled, custom-fitted to each astronaut, and features a survival kit including a life preserver, rescue knife, flashlight, whistle, and light sticks.

In short, it's a freakin' space suit that's ready for anything. Function takes precedence over form; it was designed to look like a space suit — not a tuxedo.

Read This Next
Shoo
Scientists Warn Giant Asteroid Is Actually Swarm, Nearly Impossible to Destroy
A Sip of Opal
NASA Discovers Precious Gemstones on Mars
Moon Wrestling
The Head of NASA Is Scared Chinese Astronauts Will Seize Portions of the Moon
Shot Well
Head of NASA Relieved to Hear Elon Musk Isn't REALLY Running SpaceX
Little Boxes
One Silly Little Detail Is Reportedly Delaying Artemis II by Years
More on Off World
Space Junk News
5:06 PM on the byte
Two Large Chunks of Space Debris Just Almost Collided in an Epic Disaster
Mars Drop
2:16 PM on the byte
NASA's Mars Rover Perseverance Just Dropped Off Its Last Sample
Final Selection
Yesterday on the byte
NASA Finalizing Secretive Decision on First Astronauts for the Artemis Moon Mission
READ MORE STORIES ABOUT / Off World
Keep up.
Subscribe to our daily newsletter to keep in touch with the subjects shaping our future.
+Social+Newsletter
TopicsAbout UsContact Us
Copyright ©, Camden Media Inc All Rights Reserved. See our User Agreement, Privacy Policy and Data Use Policy. The material on this site may not be reproduced, distributed, transmitted, cached or otherwise used, except with prior written permission of Futurism. Articles may contain affiliate links which enable us to share in the revenue of any purchases made.
Fonts by Typekit and Monotype.