If the NASA x SpaceX launch is canceled, this is when it'll be rescheduled to. 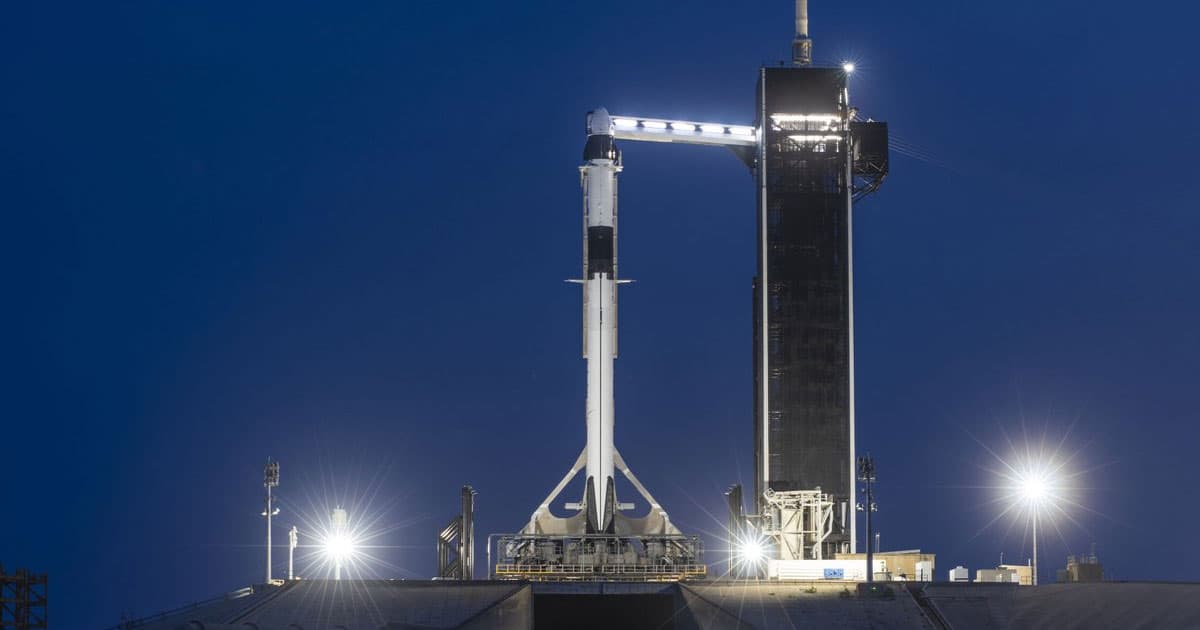 SpaceX and NASA may have to scrub their historic launch to the International Space Station this afternoon, not due to the pandemic — but because of bad weather.

At 10 am, the Air Force’s 45th Weather Squadron, the unit in charge of monitoring the weather near NAS's Kennedy Space Center in Florida, said that a low pressure system could "threaten the Space Coast with showers and thunderstorms this afternoon," in an update.

The launch has not yet been postponed at the time of writing.

If successful, today's demonstration launch will mark the first time astronauts have launched to orbit from American soil in nearly a decade.

The goal is to launch NASA astronauts Bob Behnken and Doug Hurley on board SpaceX's Crew Dragon spacecraft to the International Space Station from NASA's Kennedy Space Center.

Launching astronauts not only requires the weather at the launch site to play along, but ocean waters at multiple possible splashdown sites across the Atlantic also have to be calm, just in case Behnken and Hurley need to make an emergency landing.

And if recent weather reports are anything to go by, the ocean isn't exactly calm. Earlier today, tropical storm Bertha made landfall on South Carolina's coast, the second named storm before the official start of 2020's Atlantic hurricane season.

SpaceX is no stranger to delaying its launches. The first launch of its massive Falcon Heavy rocket had to be postponed multiple times in 2017 and 2018. Its Starship prototype "Starhopper" also saw plenty of delays leading up to its first test.

The news comes after NASA cleared SpaceX for liftoff on May 22 after completing a Flight Readiness Review.

Read This Next
Shoo
Scientists Warn Giant Asteroid Is Actually Swarm, Nearly Impossible to Destroy
A Sip of Opal
NASA Discovers Precious Gemstones on Mars
Moon Wrestling
The Head of NASA Is Scared Chinese Astronauts Will Seize Portions of the Moon
Shot Well
Head of NASA Relieved to Hear Elon Musk Isn't REALLY Running SpaceX
Little Boxes
One Silly Little Detail Is Reportedly Delaying Artemis II by Years
More on Off World
Gl1tc4
2:44 PM on the byte
NASA Says Another James Webb Instrument Has Suffered a Glitch
comet Spotting
2:06 PM on the byte
Behold! Dazzling Green Comet Approaches
Drama Bomb
Wednesday on the byte
European Space Agency Halts Plans to Send Astronauts to Chinese Space Station
READ MORE STORIES ABOUT / Off World
Keep up.
Subscribe to our daily newsletter to keep in touch with the subjects shaping our future.
+Social+Newsletter
TopicsAbout UsContact Us
Copyright ©, Camden Media Inc All Rights Reserved. See our User Agreement, Privacy Policy and Data Use Policy. The material on this site may not be reproduced, distributed, transmitted, cached or otherwise used, except with prior written permission of Futurism. Articles may contain affiliate links which enable us to share in the revenue of any purchases made.
Fonts by Typekit and Monotype.