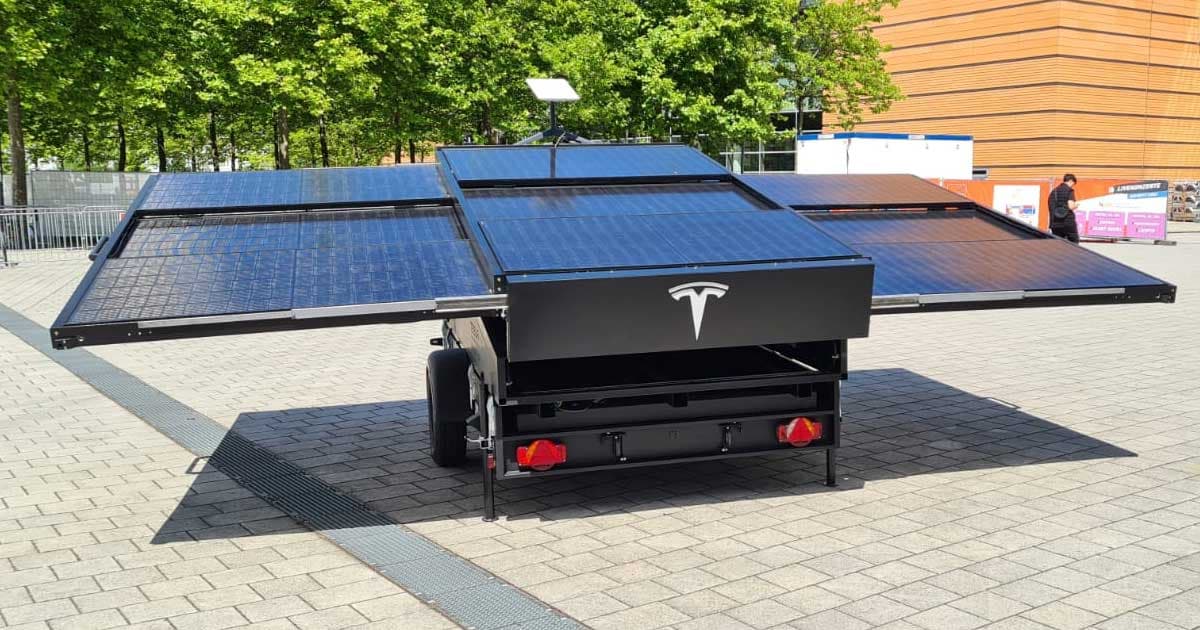 While we're not expecting to see it hitting store shelves any time soon, Tesla has shown off a massive solar trailer during an exposition in Germany, as seen in new images shared online.

The bulky range-extending trailer even includes a SpaceX Starlink internet satellite dish in the back. In short, it's the ultimate off-grid accessory for your Tesla — if it ever were to go into production, that is.

The car company showed off the trailer at the IdeenExpo in Hannover, Germany this week. It's a fun demo, but probably less of a finished consumer product than an effort to draw attention at the expo.

Tesla is at the "IdeenExpo" in Hannover.

They brought a solar range extender trailer with Starlink.

And a Model Y with the 4680 structural battery pack.

It's not the first time Tesla has indicated it's looking to boost range using solar panels. Tesla CEO Elon Musk promised back in 2019 that the yet-to-be-released Cybertruck would feature solar power panels on its back that would generate "15 miles per day, possibly more."

While we have yet to see any concrete plans that the pickup truck will actually feature a solar add-on, the company did submit patent applications for the idea last year.

According to Electrek, there's a decent chance we could be looking at 300 watt solar panels, resulting in an estimated 50 miles of extra range a day. It could also provide new options for off-grid Tesla fans, especially with the Starlink upgrade.

But the car company has yet to release any details. It did, however, show off something a little more concrete at the exposition: a Model Y SUV featuring the company's 4680 structural batteries, a significant part of the company's plans to boost the range and capacity of its future vehicles, regardless of how they're charged.

From Our Partners
Build A Robotic Toy Car With This DIY Self-Driving Vehicle Kit
9. 26. 21
Read More
From Our Partners
Build Your Own Self-Driving Car With This DIY Kit
9. 3. 21
Read More
From Our Partners
Make STEM Exploration A Family Activity With These Ten DIY Kits
7. 30. 21
Read More
+Social+Newsletter
TopicsAbout UsContact Us
Copyright ©, Camden Media Inc All Rights Reserved. See our User Agreement, Privacy Policy and Data Use Policy. The material on this site may not be reproduced, distributed, transmitted, cached or otherwise used, except with prior written permission of Futurism. Articles may contain affiliate links which enable us to share in the revenue of any purchases made.
Fonts by Typekit and Monotype.