"We're trying to make some ventilators out of some car parts, so that we can help out the medical industry without taking away from their supply." 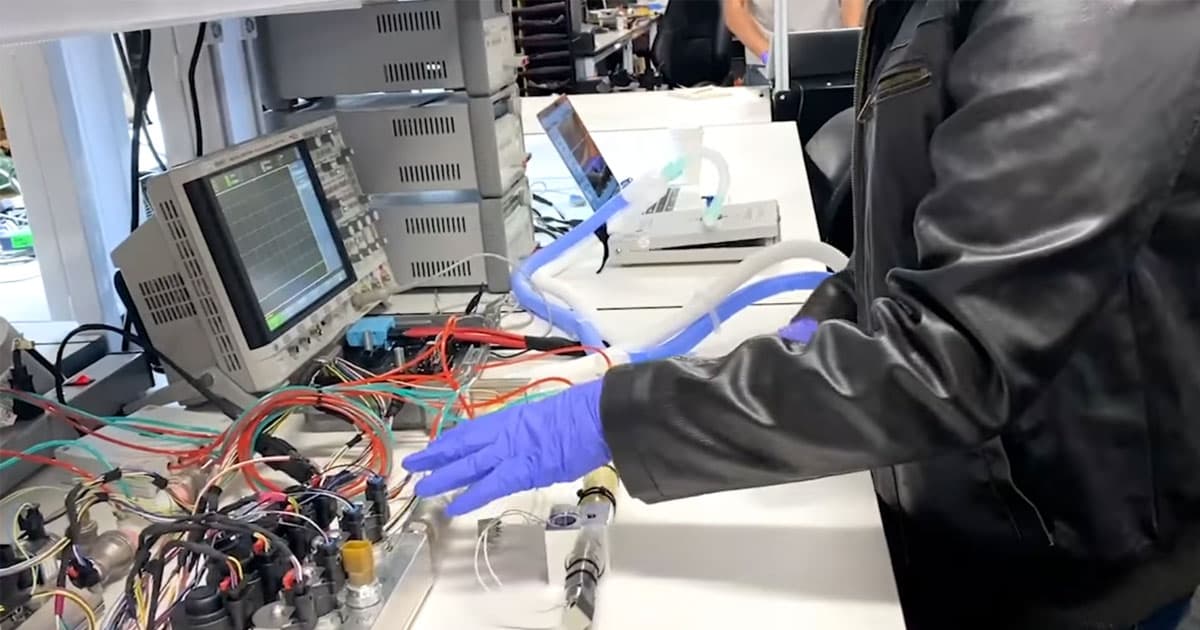 Electric car company Tesla showed off a working prototype of a ventilator in a video uploaded to YouTube on Sunday.

Tesla CEO Elon Musk had promised to use Tesla resources to "make ventilators if there is a shortage" in order to assist overtaxed hospitals during the coronavirus outbreak last month — and this seems to be the result.

The carmaker is using its existing know-how to help out those in need.

"We're trying to make some ventilators out of some car parts, so that we can help out the medical industry without taking away from their supply," a masked Lars Moravy, vice president of vehicle engineering, said in the video.

"We want to use parts that we know really well, that we know the reliability of, and we can go really fast and they are available in volume,” Joseph Mardall, Tesla’s engineering directory, said. “We’ve used a lot of those.”

The machine still needs to go through the US Food and Drug Administration for testing and approval — a process that could take a long time. We also don't know yet if Tesla is capable of producing them at a high volume.

"There's still a lot of work to do but we're giving it our best effort to make sure we can help some people out there," Moravy said.

Tesla isn't the only carmaker involved in the effort to fight COVID-19. General Motors and Ford have also taken up the task of building their own ventilators for US hospitals. Vacuum maker Dyson released its own sleek design as well.

Two weeks ago, Musk also sourced some existing 1,255 ventilators from Chinese manufacturers and donated them to hospitals in the Los Angeles area, what California governor Gavin Newsom called "an heroic effort."

Critics were quick to point out that Musk supplied the wrong kind of ventilator — non-invasive BPAP and CPAP machines that are used to help patients with milder ailments like sleep apnea — rather than the invasive ventilators that need to be intubated, which are required to help COVID patients.

Health officials also pointed out that these "ventilators" could "possibly increase the spread of infectious disease by aerosolizing the virus," as NPR wrote.

Read This Next
Kiddy League
Tesla Fans Put Child in Path of Moving Tesla on Self-Driving Mode
Tela Ransomware
Tesla Cuts Car's Range By 30%, Demands $4,500 to Get It Back
Where's Musko
7 Theories About Why Elon Musk Has Disappeared
tesla recall
Tesla Accused of Shutting Off Autopilot Moments Before Impact
Fiery Furnaces
Firefighters Struggle as Junkyard Tesla Bursts Into Flames Weeks After Crash
More on Advanced Transport
USA! USA!
4:45 PM on the byte
Dodge Says It's Making an Electric Muscle Car That's Super Loud and Obnoxious
Musings On Musk
2:11 PM on the byte
Ex-Tesla Employee Says If You Disagree With Elon Musk You're Getting Fired
Tesla Troubles
Tuesday on the byte
California Wants Tesla to Stop Calling Half-Finished System "Full Self-Driving"
READ MORE STORIES ABOUT / Advanced Transport
Keep up.
Subscribe to our daily newsletter to keep in touch with the subjects shaping our future.
+Social+Newsletter
TopicsAbout UsContact Us
Copyright ©, Camden Media Inc All Rights Reserved. See our User Agreement, Privacy Policy and Data Use Policy. The material on this site may not be reproduced, distributed, transmitted, cached or otherwise used, except with prior written permission of Futurism. Fonts by Typekit and Monotype.