New Robot Dogs Can Deliver Your Lunch Right to Your Desk

When the dog becomes the mailman. 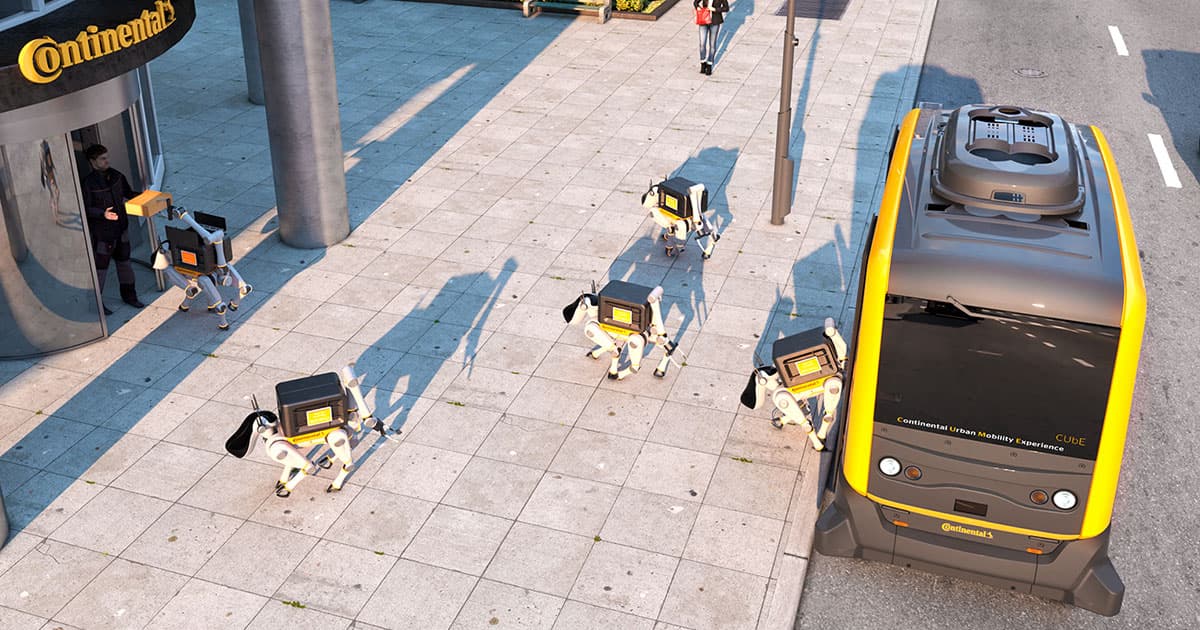 What does an autonomous delivery bot do when it encounters a set of stairs in its path?

Automotive corporation Continental teamed up with startup ANYbotics to combine the mobility of a four-legged, Boston Dynamics-style robot dog with an autonomous delivery vehicle. The result, which it showed off in a live demo at the Consumer Electronics Show in Las Vegas this week, comes across either as a “Black Mirror” episode — or a vision of the future of delivery.

The concept is an unusual one: an autonomous vehicle pulls up to an address and spits out one or more (the press release isn’t entirely clear) smaller quadripedal robot dogs, which ANYbotics calls “ANYmals,” to complete the delivery. During a live demo, the robot dogs climbed stairs and even rang a doorbell.

The idea is to find a solution for “urban ‘first or last mile’ mobility” to extend delivery “right to your doorstep,” according to a Continental press release. The company says deliveries could be made around the clock, even when “many people are working, at school or otherwise occupied.”

This tech is probably still many years out. We haven’t even figured out if we’re willing to share public sidewalks with tiny wheeled delivery vehicles yet. One such delivery vehicle even burst into flames in California last month.

Companies like Boston Dynamics have made major strides in four-legged robots that can complete a range of tasks, from climbing steep hills, to mapping complex environments.

If those types of advancements can be used to drop off meals or parcels, it could revolutionize the delivery industry.

Read This Next
Amazon Scout
Amazon is Unleashing Its Own Army of Delivery Robots
Battle of the Bots
U.S. Grocer Kroger Has Begun Making Autonomous Deliveries
Delivery Vroom
This Self-Driving Car Uses a Fold-Out Robot Arm to Deliver Parcels
Futurism
DARPA’s Autonomous System Can Fly and Land a Helicopter with Just a Tablet
Futurism
Lockheed Confirms Secretive SR-72 Hypersonic Plane Will Be Made
More on Advanced Transport
Musk Contemplation
Yesterday on the byte
Elon Musk Praises Tesla Nemesis, Ford, In Rare Reversal
Safety Is Not a Yoke
Thursday on the byte
US Regulators Not Sure If Tesla’s Funky New Steering Wheel Breaks Rules
Car Culture
Wednesday on the byte
Startup Says It Can “Charge” an Electric Car In Under Ten Minutes
READ MORE STORIES ABOUT / Advanced Transport
Keep up.
Subscribe to our daily newsletter to keep in touch with the subjects shaping our future.