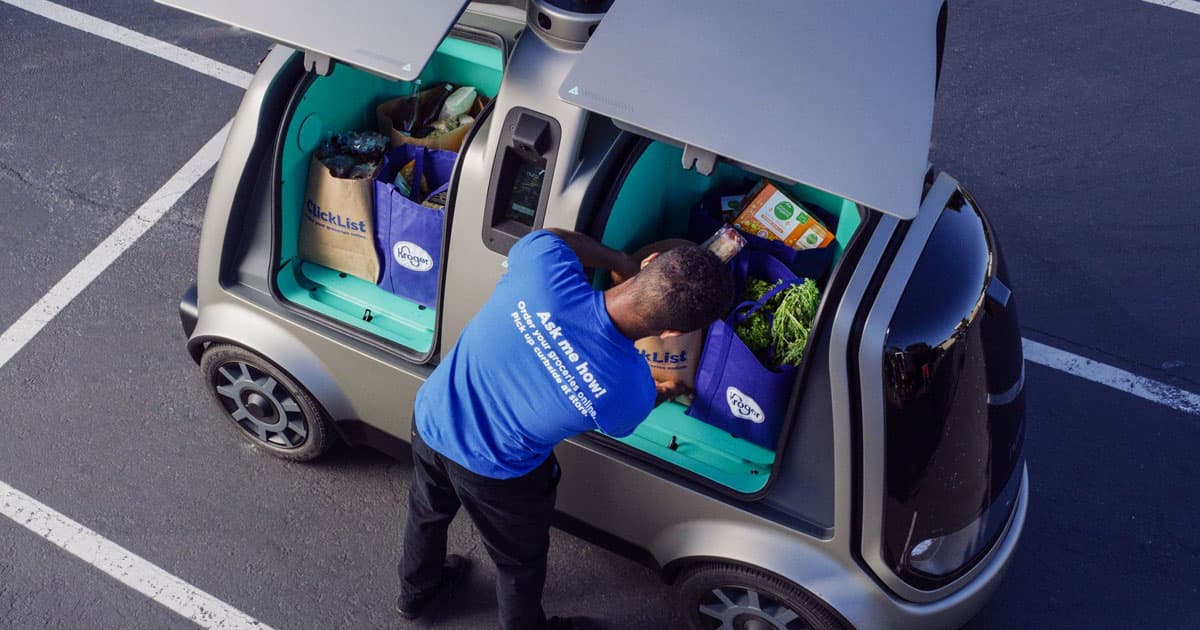 Earlier this year, the supermarket chain announced it will work with Nuro to launch a driverless delivery service in Scottsdale, Arizona. The program used a fleet of Toyota Priuses, equipped with sensors and AI equipment, and staffed by safety drivers.

Now Nuro is confident enough to fulfill orders without the human driver. According to a blog post, the company has been working on perfecting the design of an "unmanned on-road vehicle" called the R1. But Nuro hasn't removed humans from the equation completely. Nuro employees are still able to take over control over its fleet of R1s remotely.

The R1 features "world-class self driving software and sensing hardware," and takes up far less room on the road than a traditional passenger car. It's built from the ground up to haul groceries, so it's easy to load and unload.

Customers will still have to step out to the side of the road to retrieve their groceries. Deliveries via the service will cost $5.95 extra.

Battle of the Bots

The collaboration between Kroger and Nuro isn't the only autonomous delivery service in the works. Food delivery startup Postmates just revealed its own autonomous vehicle service — though it will share the sidewalk with pedestrians rather than driving on the road.

But will the roads be safe with Nuro's bots zipping by loaded with groceries? As long as they don't catch fire, we'll hopefully be fine.

More on delivery robots: A Delivery Robot Burst Into Flames in California

Read This Next
Autonomous Donuts
Watch a Self-Driving Car Careen Around Corners Like a Racecar
Project Titan
Apple Lays Off 200 Workers From Secretive Self-Driving Car Project
Amazon Scout
Amazon is Unleashing Its Own Army of Delivery Robots
Robot Dogs with Jobs
New Robot Dogs Can Deliver Your Lunch Right to Your Desk
Delivery Vroom
This Self-Driving Car Uses a Fold-Out Robot Arm to Deliver Parcels
More on Advanced Transport
Quelle Surprise!
8:05 PM on the byte
Of Course Elon Musk Is Pushing The Cybertruck Back Again, What Did You Expect?
Stay Away
Yesterday on the byte
New SUV Features Electrified Door Handles and Pepper Spray Guns
No Fly
Monday on the byte
The TSA's Entire No Fly List Appears to Have Just Leaked
READ MORE STORIES ABOUT / Advanced Transport
Keep up.
Subscribe to our daily newsletter to keep in touch with the subjects shaping our future.
+Social+Newsletter
TopicsAbout UsContact Us
Copyright ©, Camden Media Inc All Rights Reserved. See our User Agreement, Privacy Policy and Data Use Policy. The material on this site may not be reproduced, distributed, transmitted, cached or otherwise used, except with prior written permission of Futurism. Articles may contain affiliate links which enable us to share in the revenue of any purchases made.
Fonts by Typekit and Monotype.