Amazon is Unleashing Its Own Army of Delivery Robots

With Amazon on board, delivery robots are now a big deal. 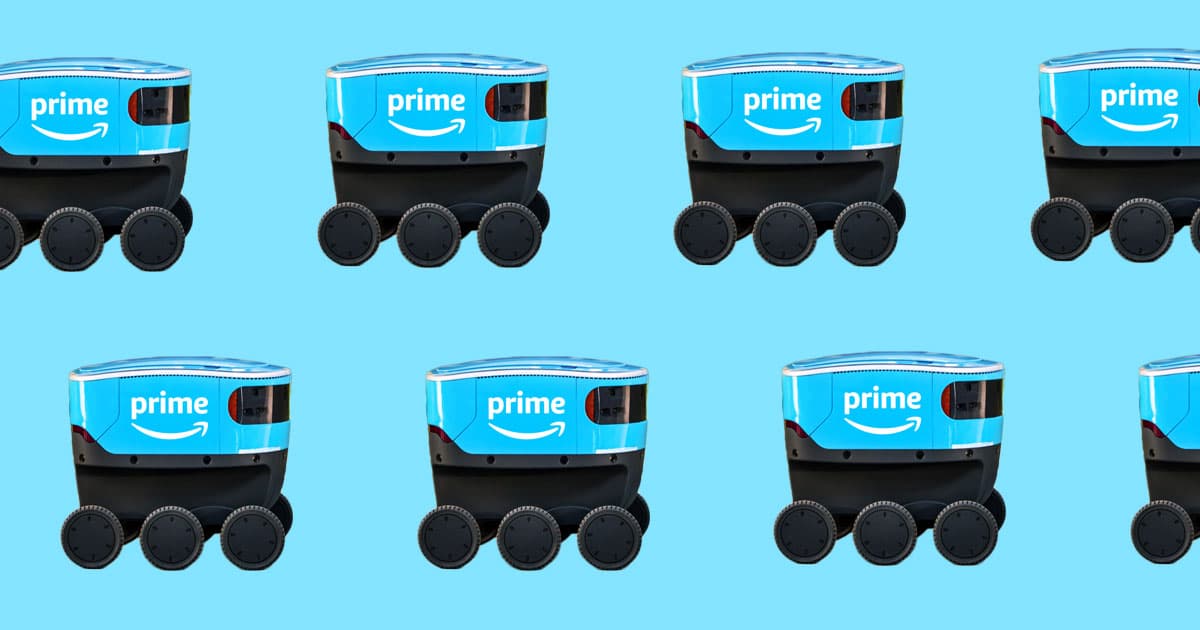 To absolutely nobody's surprise, Amazon announced today that it will roll out its own network of delivery robots.

Amazon's diminutive new six-wheeled friend is called Scout. It'll deliver your packages, according to the company, without a need for a pesky and demanding human.

Scout is about the size of a small cooler, and rolls along at walking speeds. Amazon says it'll be able to navigate safely around "pets, pedestrians and anything else in their path," according to a press release.

An initial trial will be limited to Snohomish County, a region north of Amazon's home city of Seattle, Washington.

Amazon will start off with just six Scout devices, delivering only during daylight hours during the week — likely to avoid heavier foot traffic on sidewalks.

Amazon isn't the first company to jump on the delivery robot bandwagon. We've seen numerous companies announce their own fleet of autonomous delivery vehicles. But considering the scale of Amazon's operations and its sheer number of customers, this is a big deal.

Amazon has more than enough influence over the online shopping world. Now that the world's most valuable company has expressed interest in the technology, we could see a lot more robots like Amazon's Scout navigating sidewalks in the near future.

READ MORE: Amazon is piloting its own delivery robot [TechCrunch]

Read This Next
Robot Dogs with Jobs
New Robot Dogs Can Deliver Your Lunch Right to Your Desk
Battle of the Bots
U.S. Grocer Kroger Has Begun Making Autonomous Deliveries
Delivery Vroom
This Self-Driving Car Uses a Fold-Out Robot Arm to Deliver Parcels
Futurism
Amazon Wants to Use Drones to Recharge the Batteries of Electric Vehicles
Futurism
Amazon May Be Using a Hyperloop to Deliver Same-Day Shipping
More on Advanced Transport
Kapow
Feb 3 on the byte
Self-Driving Car Plowed Into Active Fire Scene, Forcing Firefighters to Smash Its Window
Netflix and Drive
Jan 30 on futurism
Mercedes Claims to Have Achieved Level 3 Automation, Beating Tesla
Battery Trouble
Jan 30 on the byte
Tesla "Spontaneously" Bursts Into Flames While Driving Down Freeway
READ MORE STORIES ABOUT / Advanced Transport
Keep up.
Subscribe to our daily newsletter to keep in touch with the subjects shaping our future.
+Social+Newsletter
TopicsAbout UsContact Us
Copyright ©, Camden Media Inc All Rights Reserved. See our User Agreement, Privacy Policy and Data Use Policy. The material on this site may not be reproduced, distributed, transmitted, cached or otherwise used, except with prior written permission of Futurism. Articles may contain affiliate links which enable us to share in the revenue of any purchases made.
Fonts by Typekit and Monotype.