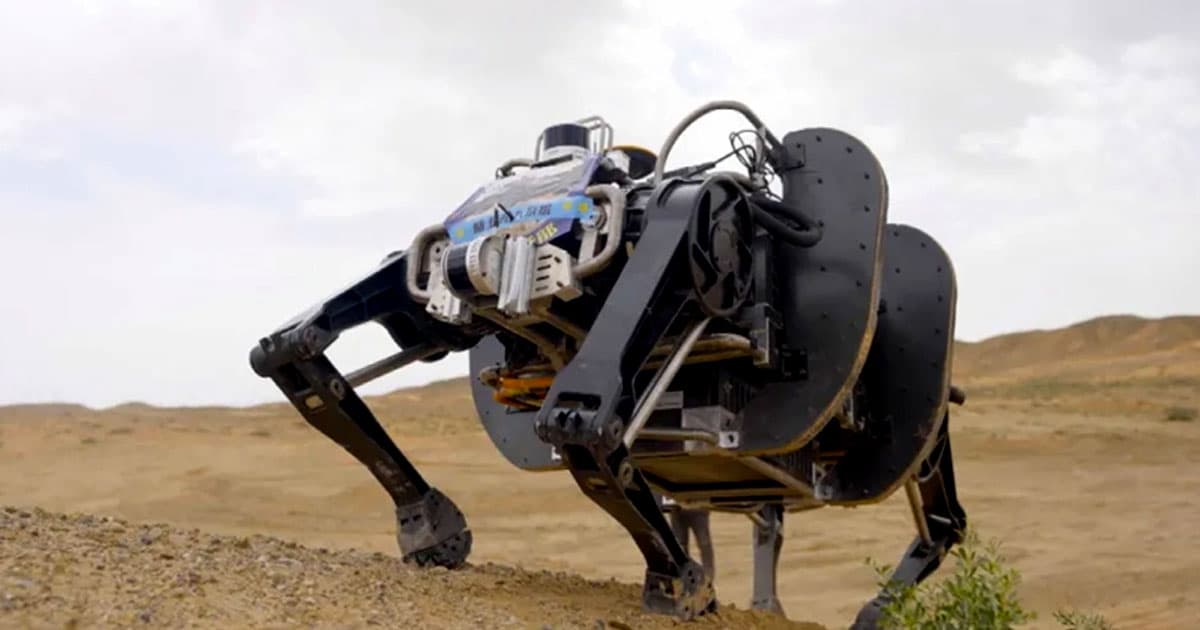 This "mechanical yak" is an absolute beast.

This "mechanical yak" is an absolute beast.

China claims to have built the "world's largest quadruped bionic robot," a gigantic "mechanical yak" that can carry over 350 pounds at a shambling 6.2 mph, according to a report by the state-run Global Times. The goal is to carry gear for soldiers stationed in remote areas.

A clip shared by the People's Daily, also associated with the Chinese government, shows a behemoth-sized quadruped going for a stroll along an empty road. It can also be seen tackling dusty inclines in the desert, an impressive mechanical feat that could one day be of huge benefit in areas inaccessible to conventional vehicles, and even weaponized.

China's first domestically built "yak" robot with a load capacity of 160 kg made its debut recently. The robot can deal with all sorts of road and weather conditions. pic.twitter.com/x1SPGzn04S

Rise of the Quadruped

The design is certainly pretty familiar at this point. The robot bears a striking resemblance to Boston Dynamics' DARPA-funded quadruped "AlphaDog" robot, which was first shown off to the public back in 2012. A different design by the company, called "BigDog," dates back to 2005 and was capable of lugging 340 pounds at 4 mph.

China's new robot yak is capable of moving forward, backward, and diagonally. According to state media, it can even "dash and jump."

The country's military is apparently envisioning using it to lug materials including munitions and food through mountainous regions or deserts where conventional vehicles struggle.

More worryingly, the report also suggests the robot could be weaponized for recon missions — the equivalent of a drone, but on the ground.

China's latest arsenal of quadruped robots proves the country's latest technological advancements when it comes to the battlefield, a rapidly growing industry that could change the face of combat forever.