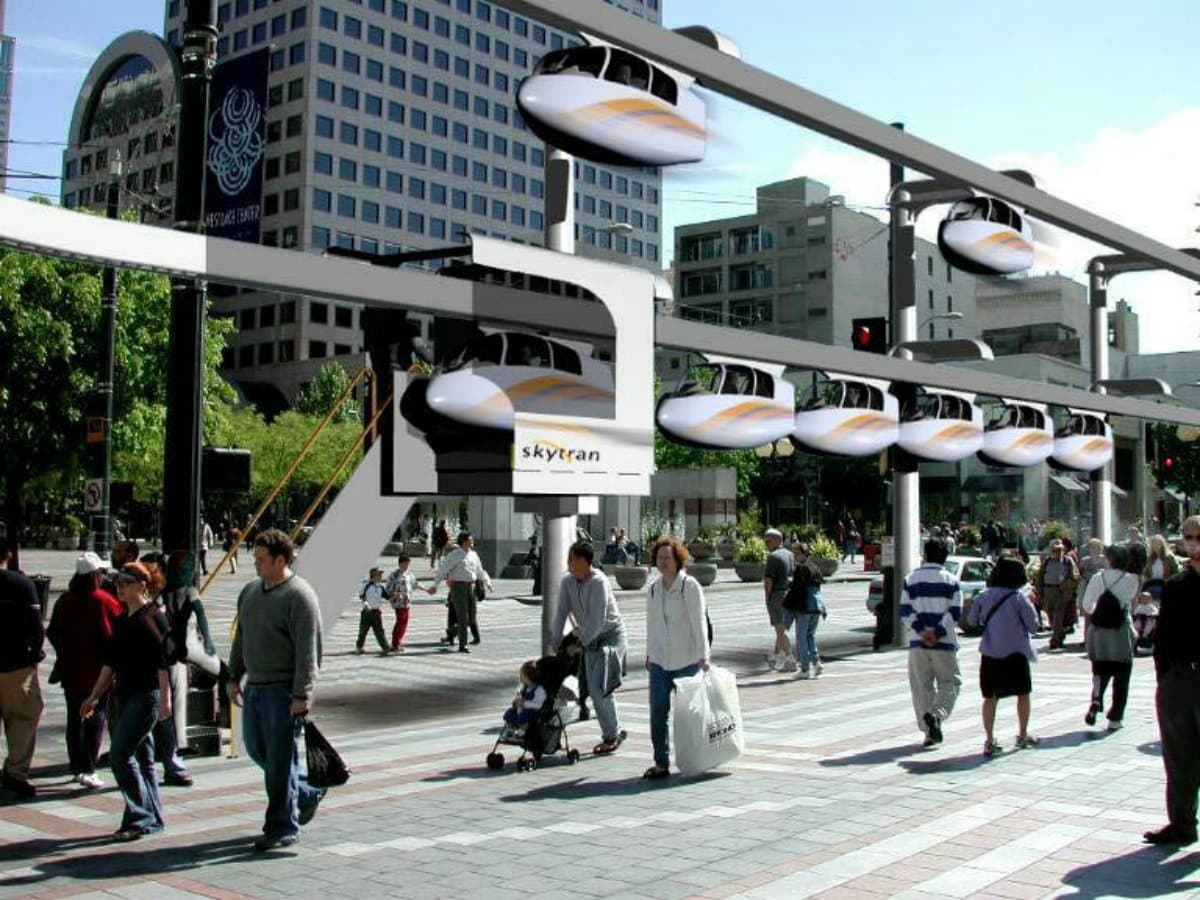 SkyTran, a new company from former NASA Engineer Doug Malewick, has a futuristic solution to our current traffic problems—an elevated, self-driving monorail that operates 6 meters (20 feet) in the air. Oh, and it can travel up to 240 kmh (150 mph). Malewicki developed the 300-pound personal pods that will hang from aluminum rails and levitate using gravity, magnets, and (best of all) minimal electricity. Once a pod reaches 10 mph, these methods will be enough to let each pod accelerate and glide without additional power.

According to NASA, the cost of building the infrastructure is only around $13 million per mile. That seems like an exorbitant amount of money, and it certainly isn't cheap; however, it's only a fraction of the traditional subway systems, which costs at least $160 million.

skyTran’s first 900-foot test station is slated to open at Israel Aerospace Industries by the end of the year ,and could expand to countries such as the US, France, and India by as early as 2018.

The Future of Travel

“The only way to get around traffic is to literally go above it,” skyTran CEO Jerry Sanders tells Tech Insider, who sees the skyTran system changing a typical two-hour commute into a brief, 10-minute trip.

In the end, it seems that skyTran presents a more cost-effective answer to the persistent traffic problems that plague our of urban areas today, especially since the transportation concept does not require a lot of space to build. The system’s tracks could run through business districts, airports, and universities to help alleviate the congestion of vehicles (and people) in high traffic areas.

Read This Next
Alt Propulsion
NASA, DARPA, MIT Scientists Met to Discuss "Anti-Gravity" Tech
The Other Left!
A Guy Who Drives NASA's Mars Rover Is Dishing About the Experience
Digging a Mole
NASA’s Mars Mole is Officially “Dug In”
A New Perspective
NASA's Mars Helicopter Could Revolutionize Off-Planet Exploration
Hammer Time
Crap: NASA's Mars "Mole" Finally Started Digging, Then Hit Another Obstacle
More on Robots & Machines
From the Dept. of...
Yesterday on futurism
The Best Mini Fridges of 2023
Blow Up Doll
Monday on the byte
Ukraine Accuses Russia of Using Inflatable "Dummy Tanks," Which Deflated
From the Dept. of...
Monday on futurism
The Best UPS Battery Backups of 2023
READ MORE STORIES ABOUT / Robots & Machines
Keep up.
Subscribe to our daily newsletter to keep in touch with the subjects shaping our future.
+Social+Newsletter
TopicsAbout UsContact Us
Copyright ©, Camden Media Inc All Rights Reserved. See our User Agreement, Privacy Policy and Data Use Policy. The material on this site may not be reproduced, distributed, transmitted, cached or otherwise used, except with prior written permission of Futurism. Articles may contain affiliate links which enable us to share in the revenue of any purchases made.
Fonts by Typekit and Monotype.