Here's how to drive a Mars rover. 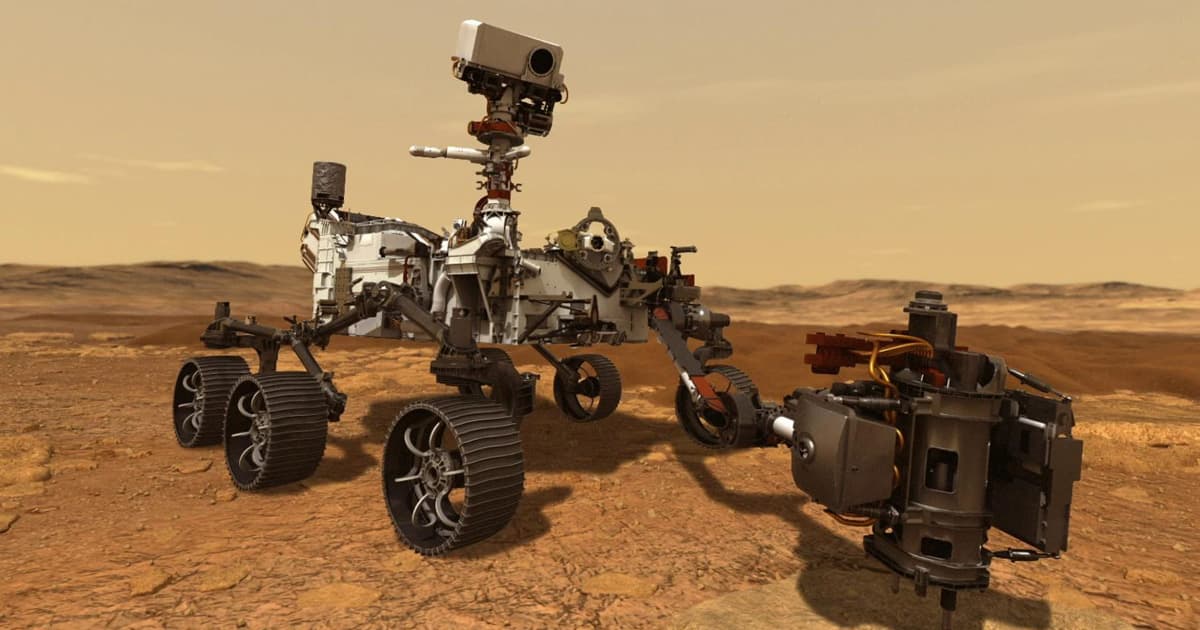 In less than two months, NASA is planning to land its next rover on the surface of Mars. If all goes well, Perseverance will take off on its adventure in mid-February, carrying out a number of scientific experiments along the way — including the launch of a tiny helicopter.

In a new Medium post, NASA engineer Evan Hilgemann explains what it's actually like to drive a Mars rover. Last year, Hilgemann was selected to join the team of engineers responsible for driving the six-wheeled Curiosity rover across the desert-like landscapes of the Red Planet.

Since signals take 22 minutes to travel from Earth to Mars, the rover will have to take care of numerous navigational tasks by itself. However, "most of what rovers do is actually heavily scripted and planned ahead on Earth," Hilgemann writes.

Perseverance is kitted out with a number of 3D-capable cameras, allowing it to see its near and distant surroundings. These "navcams" allow teams back on Earth to virtually recreate the terrain the rover is covering.

Hilgemann and his team are responsible for making sure the rover isn't in any danger. For instance, "the suspension system of the rover can only handle rocks and ledges up to a couple of feet high so anything larger must be avoided," the engineer writes. The rover also has to avoid small rocks and loose sand to make sure it doesn't get stuck or wear out its wheels too much.

The team has several different ways to actually drive the rover. It can send the rover a list of instructions, a process known as "blind driving," or it can use "visual odometry," where the rover stops about every meter to send a picture back of what it sees. A computer then can tell it if it's safe to proceed.

The rover's most advanced navigation mode is "autonav." As its name suggests, the mode turns Perseverance essentially into a self-driving car.

"Because autonav has to stop frequently to take multiple images and crunch data, it is also the slowest driving mode," Hilgemann writes. "Curiosity only covers about 100 feet in an hour in autonav mode."

Once it lands on the Red Planet in February, Perseverance should get on the road fairly quickly. That is, if everything goes according to plan and NASA's lander survives the infamous "seven minutes of hell" as it descends through the planet's thin atmosphere.

Thanks to "a few key upgrades when it comes to navigation," Perseverance will be able to "drive at least twice as fast as Curiosity thanks to new dedicated computing resources and better algorithms," Hilgemann writes.

One of the rover's most ambitious goals is to collect samples and prepare them to be picked up later by a probe and carried back home to Earth.

READ MORE: How to drive a Mars rover [Medium]

More on Perseverance: NASA Just Powered Up Its Mars Helicopter

Read This Next
Alt Propulsion
NASA, DARPA, MIT Scientists Met to Discuss "Anti-Gravity" Tech
Digging a Mole
NASA’s Mars Mole is Officially “Dug In”
A New Perspective
NASA's Mars Helicopter Could Revolutionize Off-Planet Exploration
Hammer Time
Crap: NASA's Mars "Mole" Finally Started Digging, Then Hit Another Obstacle
Mars Copter
Here's NASA's Ingenious Way of Testing Its Mars Helicopter
More on Robots & Machines
From the Dept. of...
12:00 AM on futurism
The Best Wireless Mouse of 2023
Balloon Boy
Yesterday on the byte
Other Chinese Balloons Apparently Flew Over America, But Nobody Noticed Them
From the Dept. of...
Yesterday on futurism
The Best Desks of 2023
READ MORE STORIES ABOUT / Robots & Machines
Keep up.
Subscribe to our daily newsletter to keep in touch with the subjects shaping our future.
+Social+Newsletter
TopicsAbout UsContact Us
Copyright ©, Camden Media Inc All Rights Reserved. See our User Agreement, Privacy Policy and Data Use Policy. The material on this site may not be reproduced, distributed, transmitted, cached or otherwise used, except with prior written permission of Futurism. Articles may contain affiliate links which enable us to share in the revenue of any purchases made.
Fonts by Typekit and Monotype.