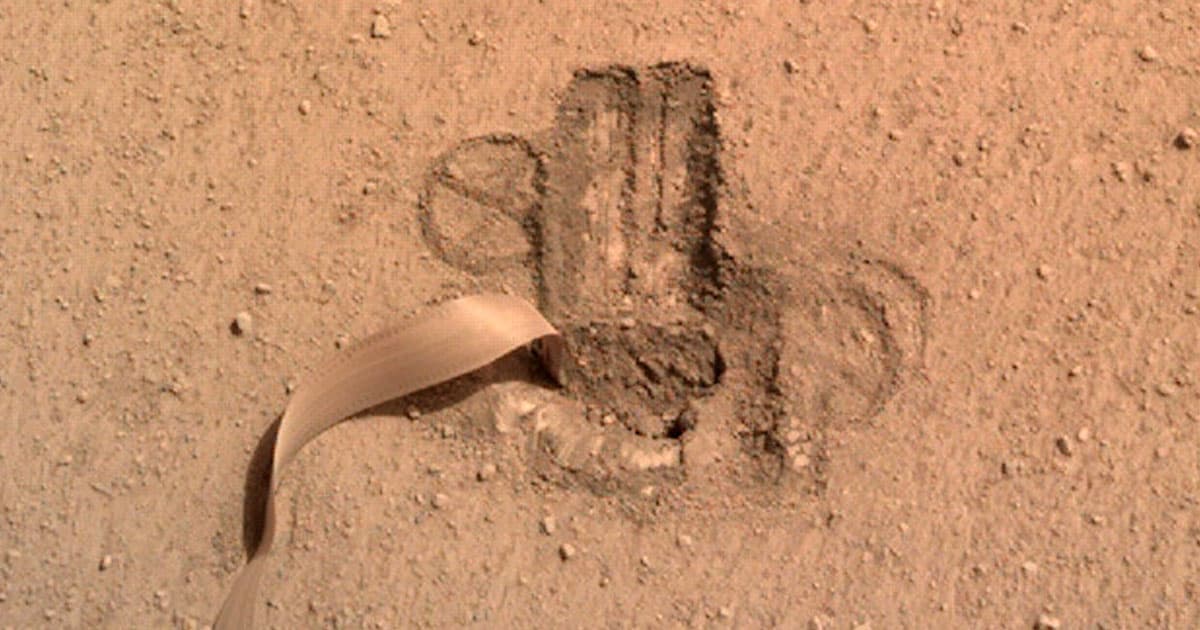 After spending over a year of trying to bury itself into the surface of Mars to take the Red Planet's temperature, the "mole" attached to NASA's InSight Mars lander is finally officially "in" and buried in sand according to an update by the German Aerospace Center (DLR).

Back in June, the DLR team pulled the mole out of the Martian soil in to check up on it, and decided to get back to drilling down into the surface. After a lengthy “hammering session” of 150 strokes on June 20, as JPL put it in a July update, the mole caused “bits of soil jostling within the scoop — possible evidence that the mole had begun bouncing in place, knocking the bottom of the scoop.”

The team thought that soil fell in from the sides of the hole the mole dug. "Instead, we were pleasantly surprised to see that the Mole was largely covered with sand," reads today's DLR update. "Only the back cap and a few centimeters of the hull are sticking out."

Having the mole completely covered in sand could provide enough friction for the mole to make more headway in its endeavor of reaching a maximum depth of ten feet. The success of burying the mole could also have big impacts on the scientific value of the Mars mole mission.

The mole’s mission objective is to take Mars’ temperature from below the surface — and after having it fully buried, "both the thermal and mechanical contact have improved," the update reads. "So we're feeling optimistic!"

The discovery came after a number of risky maneuvers trying to gage the state of the mole. "After intense discussion, the team decided to first do a push on the back cap, similar to the successful back cap pushes conducted in the past months," today's update reads. Unfortunately, the "scoop no longer fits in the pit," making such a maneuver pretty risky.

After a lengthy back and forth, the team decided to scrape along the top of the buried mole to test if it was possible to push it using the scoop. "The scraping was a complete success!," the team wrote. "The scrape was much more effective than expected and the sand filled the pit almost completely. The Mole is now covered, but there is only a thin layer of sand on the back cap."

The team's calculations may have gone awry due to the fact that the shovel went in much deeper than initially thought.

READ MORE: Mars InSight mission: The Mole is 'in' and the ‘finishing touches’ are ‘in sight’  [DLR]

Read This Next
Alt Propulsion
NASA, DARPA, MIT Scientists Met to Discuss "Anti-Gravity" Tech
The Other Left!
A Guy Who Drives NASA's Mars Rover Is Dishing About the Experience
A New Perspective
NASA's Mars Helicopter Could Revolutionize Off-Planet Exploration
Hammer Time
Crap: NASA's Mars "Mole" Finally Started Digging, Then Hit Another Obstacle
Mars Copter
Here's NASA's Ingenious Way of Testing Its Mars Helicopter
More on Robots & Machines
FROM THE DEPT. OF...
Yesterday on futurism
Best Charging Stations in 2022
FROM THE DEPT. OF...
Wednesday on futurism
Best Vintage Turntables in 2022
FROM THE DEPT. OF...
Wednesday on futurism
Best Gaming Chairs Under $100
READ MORE STORIES ABOUT / Robots & Machines
Keep up.
Subscribe to our daily newsletter to keep in touch with the subjects shaping our future.
+Social+Newsletter
TopicsAbout UsContact Us
Copyright ©, Camden Media Inc All Rights Reserved. See our User Agreement, Privacy Policy and Data Use Policy. The material on this site may not be reproduced, distributed, transmitted, cached or otherwise used, except with prior written permission of Futurism. Fonts by Typekit and Monotype.