If it succeeds, future missions could soar over alien landscapes — instead of crawling across them like bugs. 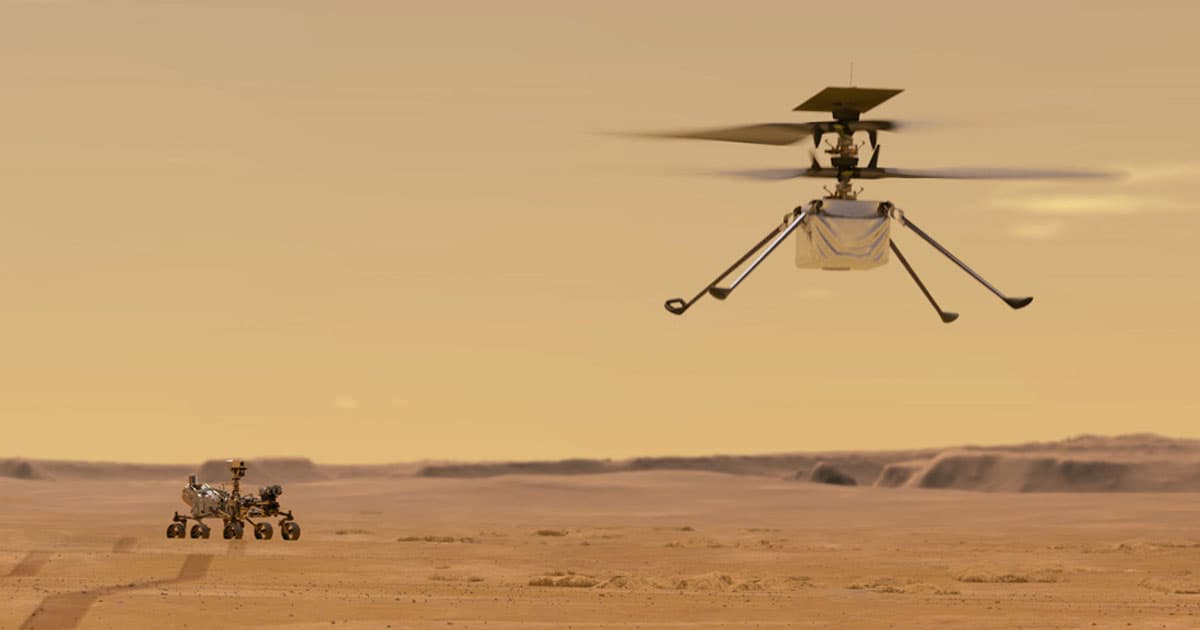 In just six short months, if all goes well, NASA's Perseverance rover will touch down on the surface of Mars — where, hidden in its belly, will be a payload that could change space exploration forever.

Like something out of a James Bond movie, a spring-loaded arm will flip a four pound helicopter, called Ingenuity, out of a compartment beneath the rover's debris shield. As it swings down, the copter — or "rotorcraft" — will deploy two of its spring-loaded landing legs and fire a pyrotechnic charge to release two more.

From that point on, Ingenuity will be on its own, tethered to Perseverance via only a wireless communications link. And if the tiny rotorcraft succeeds in flying, its creators say, it will be a watershed moment in the history of planetary exploration.

From that point on, Ingenuity will be on its own, tethered to Perseverance via only a wireless communications link. And if the tiny rotorcraft succeeds in flying, its creators say, it will be a watershed moment in the history of planetary exploration.

Not only would it be the first time that humankind has flown an aircraft beyond the Earth, but it could also be the harbinger of future missions that could soar over alien landscapes instead of crawling across them like bugs.

"The helicopter really gives you a lot of mobility to go to places — up ditches, down canyons, even [potentially] up mountains where you couldn't actually go with the rover," said Josh Ravich, a mechanical engineer at NASA's Jet Propulsion Laboratory (JPL) who worked on Ingenuity, in an interview with Futurism.

That hype extends through NASA's broad network of advocates, alumni and contractors. Mike Hirschberg, the executive director of the nonprofit Vertical Flight Society, says that a cadre of aerospace enthusiasts have been agitating for off-world flight experiments for decades.

"I always thought that Mars would be explored by airplanes," said Hirschberg, who has previously done work for both NASA and DARPA. "So it was a nice surprise to hear that [NASA] had picked the helicopter."

At the same time, the mission presents staggering challenges. Mars' atmosphere is only about one percent the density of Earth's, and its gravity is markedly lower as well — differences that made a true apples-to-apples test of the conditions the rotorcraft will face on Mars effectively impossible.

In other words, Ravich and his collaborators are hopeful that Ingenuity will fly, but they're also fully cognizant that it could fail. Perseverance is still priority number one.

"I think we've done a lot and we're fairly confident, but this is a tech demonstration mission," Ravich said. "So ultimately, we've accepted a bit higher risk."

The project — Ravich calls it a "once-in-a-lifetime mission" — is the result of decades of research and setbacks.

Its lineage traces back at least as far as 1999, when a team of aerospace engineering students from the University of Maryland won an award for their Martian Autonomous Rotary-wing Vehicle (MARV) — a design that shows striking similarities with the Ingenuity rotorcraft now headed to Mars, with two-bladed coaxial rotors lifting a square fuselage.

Hirschberg also pointed to inroads made in 2002, when Aurora Flight Sciences flew its MarsFlyer, a glider designed to take pictures of the Martian surface, 100,000 feet above the Oregon coast by dropping it from a high-altitude balloon. It spent 90 minutes following a pre-programmed flight path, landing without any damage at the same airport from which it was launched.

Despite their flying prowess, gliders only have a single chance to soar over the Martian landscape. Airplanes could take off and land more than once — but ultimately, Mars' lack of infrastructure doomed that concept as well.

"There aren't a any runways on Mars," Hirschberg said with a chuckle. "So vertical takeoff is pretty much your only option."

In 2014, engineers at JPL began with a six-inch tall proof of concept, designed to prove that it was possible to actually get off the ground in the Martian atmosphere.

But when they actually tried to flying it inside a chamber designed to simulate Mars' harsh conditions with a thin atmosphere and a tether to crudely simulate the planet's low gravity, things didn't go as planned.

"That model was capable of being joysticked by an operator, and the story goes that the operator, a fairly experienced drone pilot, tried to control the model one direction and it went in the other," Ravich recalled.

Just like the end product, early prototypes sported two counter-rotating sets of blades, stacked on top of each other. The payload was tucked into a simulated, squared off fuselage below.

It's a design that's a far cry from the quadcopter drones we're used to here back on Earth — but that's mostly due to size constraints on board Perseverance, according to Ravich.

The engineers soon realized that the vibration of the super-fast blades blades required to generate lift in Mars' thin atmosphere, which spin at nearly the speed of sound, were making conventional flight nearly impossible.

Later videos from 2014, as featured in a New York Times write-up, showed an engineering model bounce around aimlessly. The engineers had achieved lift, but were unable to gain any sense of control over the vehicle.

By adding mass and stiffening up the blades, the engineers managed to get it under control during flight tests in May 2016, but only by programming a computer to fly it autonomously — which was a necessity anyway, due to the 300 million or so miles between the operator and Ingenuity.

Next, they had to make the rotorcraft rugged enough to actually survive on Mars' extreme temperature swings. The team put a purpose-built environmental test unit through its paces, simulating the freezing temperatures of Mars at night, which dip down to a frosty -284 degrees Fahrenheit — enough to wreak havoc on electronics.

"Actually, the majority of the energy on the helicopter goes to staying warm overnight," Ravich said. "Because it's so cold there and to keep mass down, we don't have like a parka on the vehicle."

Those temperature swings, on top of unpredictable weather patterns, make picking a good time to fly on Mars a difficult task in itself. Once Ingenuity's ready to fly next spring, the team at JPL will have to find a balance point "between when the wind starts picking up versus how much time you've had to charge from the Sun," according to Ravich.

But once the Ingenuity team gets the all clear, it's planning to fly the little helicopter up to five times over just 30 days. The first flight attempt will take it up just a few feet for up to 30 seconds. The fifth and final flight — if preceding flights are considered a success — will bring it up to 15 feet into the air and take it 500 feet away from its starting position and back again to land.

Ingenuity is only the start. If it succeeds, the next step could be to scale up the next rotorcraft headed for Mars with more mass, bigger batteries, and more powerful solar panels. Key upgrades could allow future aircraft to cover much longer distances, exploring even more of the Martian surface below.

For now, any such mission is speculative. But the inertia of the Ingenuity team's vision for interplanetary rotorcraft mission is already carrying forward. As soon as 2026, NASA is planning to send a unique-looking flyer called Dragonfly to the surface of Titan — Saturn's largest moon — to scout for signs of life.

Dragonfly features four sets of two double rotors, like two quadcopters stacked on top of each other. Like Ingenuity, it's designed for vertical takeoff and landing — but its planned flights are far more ambitious.

The Dragonfly team is planning to fly the washing machine-sized drone a number of times, covering a distance of up to five miles (eight kilometers) at a time. It will also sample the surrounding areas and look for evidence of past liquid water.

In some ways, the challenges the two crafts will face couldn't be more different. Ingenuity has to battle with an extremely thin atmosphere, while Dragonfly has to lug itself through a thick soup of nitrogen — Titan's atmosphere is four times as dense as Earth's, with twice the atmospheric pressure. Despite the dense atmosphere, surface gravity is only roughly a seventh of that on Earth, similar to that on the Moon. In other words, its flight algorithms will be forged by simulations and test chambers — just like Ingenuity.

For decades, NASA has been a pioneer in exploring the worlds of our solar system, from Apollo astronauts blasting across the Moon's surface in Lunar Roving Vehicles to probes touring the outer planets and landers scanning the desert-like geographical features of Mars.

But flight on Mars could change all that forever. Its size may be unassuming, but Ingenuity's first tiny hops could set the stage for something far bigger.

Read This Next
Alt Propulsion
NASA, DARPA, MIT Scientists Met to Discuss "Anti-Gravity" Tech
The Other Left!
A Guy Who Drives NASA's Mars Rover Is Dishing About the Experience
Digging a Mole
NASA’s Mars Mole is Officially “Dug In”
Hammer Time
Crap: NASA's Mars "Mole" Finally Started Digging, Then Hit Another Obstacle
Mars Copter
Here's NASA's Ingenious Way of Testing Its Mars Helicopter
More on Robots & Machines
From the Dept. of...
Yesterday on futurism
The Best Exercise Bikes of 2023
It's Nothing Pers...
Thursday on the byte
Scientists Create Shape-Shifting Robot That Can Melt Through Prison Bars
From the Dept. of...
Thursday on futurism
The Best Smart Lights of 2023
READ MORE STORIES ABOUT / Robots & Machines
Keep up.
Subscribe to our daily newsletter to keep in touch with the subjects shaping our future.
+Social+Newsletter
TopicsAbout UsContact Us
Copyright ©, Camden Media Inc All Rights Reserved. See our User Agreement, Privacy Policy and Data Use Policy. The material on this site may not be reproduced, distributed, transmitted, cached or otherwise used, except with prior written permission of Futurism. Articles may contain affiliate links which enable us to share in the revenue of any purchases made.
Fonts by Typekit and Monotype.