"This is very analogous to the Wright brothers moment, but on another planet." 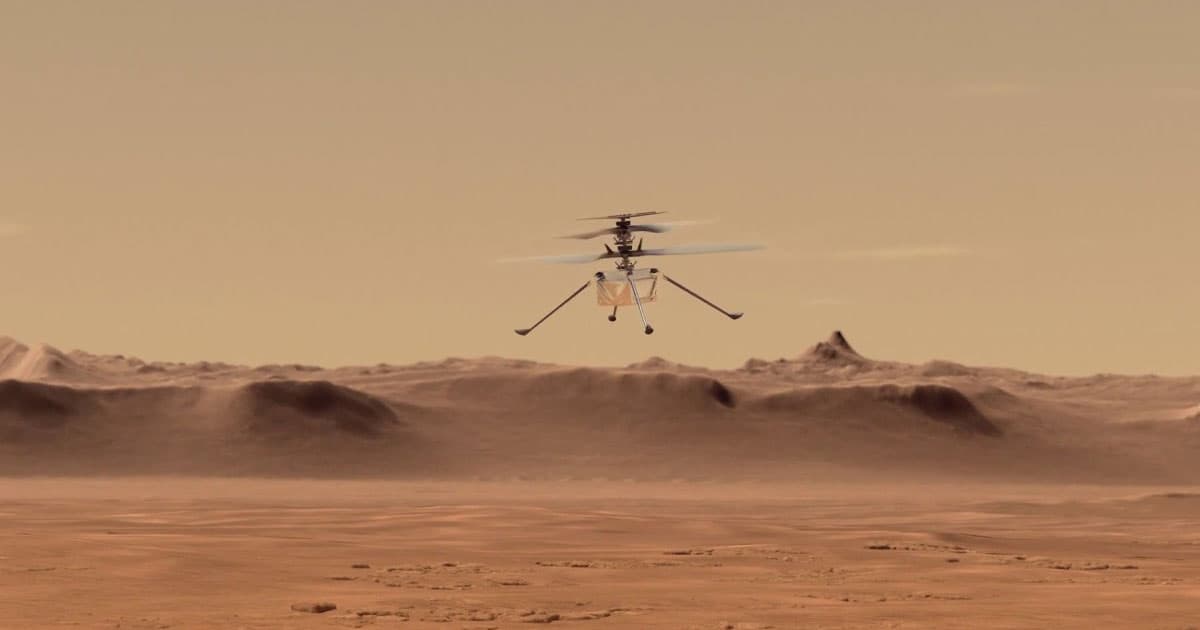 With only one percent the atmospheric density of Earth and a third of the gravity, navigating the skies of Mars will pose a massive challenge.

Next year, NASA will need to tackle both problems as it attempts to take a giant leap from scanning the Red Planet's geographical features using surface-bound rovers to launching a small helicopter, dubbed Ingenuity, to get an unprecedented aerial view of the planet's surface.

On July 20, the softball-sized helicopter, outfitted with two sets of four-foot blades, will be embarking on its lengthy journey with the agency's fifth Martian rover, Perseverance.

And when it gets there, to call flying a drone on Mars a challenge would be a vast understatement.

"This is very analogous to the Wright brothers moment, but on another planet," MiMi Aung, the project manager of the Mars helicopter at NASA’s Jet Propulsion Laboratory, told The New York Times.

Only thanks to the miniaturization of electronics, better battery tech, and new materials was NASA able to build and successfully test Ingenuity. They even had to test it in an experimental chamber with low pressure to simulate Mars' thin atmosphere.

Early prototypes were extremely hard to control. The blades were able to bounce up and down erratically thanks to the lack of air pressure. Later tests were far more successful due to new and stiffer materials being used for the blades.

"It’s quite astounding when you lift one of these blades, if you hold it in your hand, you think you’re going to lift something substantial, and it’s as light as air and, at the same time, extremely stiff," Havard Grip, research technologist at JPL, told the Times.

In February 2021, if the launch and journey to Mars go according to plan, NASA is planning to drop the helicopter on flat ground. Scientists will attempt to fly Ingenuity up to five times over 30 days.

The most ambitious flight plan will involve a 500 foot round trip in  just 90 seconds.

READ MORE: Mars Is About to Have Its ‘Wright Brothers Moment’ [The New York Times]

Read This Next
Alt Propulsion
NASA, DARPA, MIT Scientists Met to Discuss "Anti-Gravity" Tech
The Other Left!
A Guy Who Drives NASA's Mars Rover Is Dishing About the Experience
Digging a Mole
NASA’s Mars Mole is Officially “Dug In”
A New Perspective
NASA's Mars Helicopter Could Revolutionize Off-Planet Exploration
Hammer Time
Crap: NASA's Mars "Mole" Finally Started Digging, Then Hit Another Obstacle
More on Robots & Machines
From the Dept. of...
12:00 AM on futurism
The Best Exercise Bikes of 2023
It's Nothing Pers...
Yesterday on the byte
Scientists Create Shape-Shifting Robot That Can Melt Through Prison Bars
From the Dept. of...
Yesterday on futurism
The Best Smart Lights of 2023
READ MORE STORIES ABOUT / Robots & Machines
Keep up.
Subscribe to our daily newsletter to keep in touch with the subjects shaping our future.
+Social+Newsletter
TopicsAbout UsContact Us
Copyright ©, Camden Media Inc All Rights Reserved. See our User Agreement, Privacy Policy and Data Use Policy. The material on this site may not be reproduced, distributed, transmitted, cached or otherwise used, except with prior written permission of Futurism. Articles may contain affiliate links which enable us to share in the revenue of any purchases made.
Fonts by Typekit and Monotype.