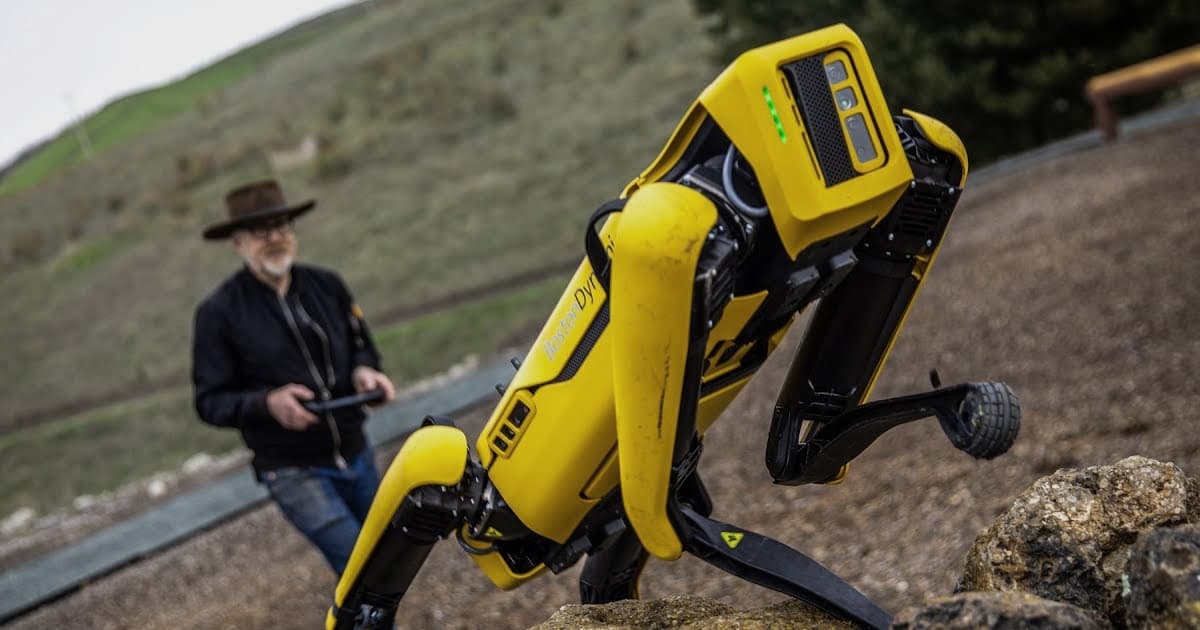 Former "MythBusters" co-host Adam Savage compared himself to a kid with an early Christmas present in the intro to a newly released video for his "Tested" YouTube series. The reason? He was sitting on large crate containing Boston Dynamics' robot dog, Spot.

"This is an object I have coveted for years — literally years," Savage said, adding, "Time for some adventures!"

As Savage explained in the video, he and his team at "Tested" will spend the next year working with Spot, exploring the robot dog's capabilities and helping Boston Dynamics expand upon them.

To that end, the first "adventure" Savage embarked upon with the robot dog took place on an outdoor obstacle course. There, he tasked the bot with climbing over rocks, crawling through tunnels, and trotting up and down stairs.

Boston Dynamics' decision to "gift" Savage a Spot robot almost certainly ties into its efforts to push a "new stage of growth" focused on bringing the robot dog to market.

The same day the video premiered, the company announced a new CEO, Rob Playter. It also made the Spot Software Development Kit publicly available via GitHub and announced its first developer conference, Actuate.

If those efforts aren't enough to sell Spot units, having one of the most beloved figures in science and tech education shower praise upon it in a year's worth of videos might do the trick — or at least make the idea of law enforcement agencies buying the robot dog seem less terrifying to the public.

"I've always thought these things were magnificent pieces of engineering every time I've seen them," Savage said in the new clip, "but actually running them through his paces makes it clear on an even deeper level what a miracle Spot is."

Read This Next
Wait What
FCC Commissioner Says He's Afraid of Robodogs and We Can't Tell If He's Joking
Bot Crime
Experts Shocked by Military Robodog With Sniper Rifle Attachment
Good Riddance
After Public Rage, NYPD Secretly Fires Robot Dog
Dog Days
NYPD Robodog Involved in Arrest of Man With Gun
Futurism
Outcry as Video Shows Robodog Patrolling With NYPD
More on Robots & Machines
FROM THE DEPT. OF...
Thursday on futurism
Best Charging Stations in 2022
FROM THE DEPT. OF...
Wednesday on futurism
Best Vintage Turntables in 2022
FROM THE DEPT. OF...
Wednesday on futurism
Best Gaming Chairs Under $100
READ MORE STORIES ABOUT / Robots & Machines
Keep up.
Subscribe to our daily newsletter to keep in touch with the subjects shaping our future.
+Social+Newsletter
TopicsAbout UsContact Us
Copyright ©, Camden Media Inc All Rights Reserved. See our User Agreement, Privacy Policy and Data Use Policy. The material on this site may not be reproduced, distributed, transmitted, cached or otherwise used, except with prior written permission of Futurism. Fonts by Typekit and Monotype.