China Plans to Launch a Mars Rover Next Year

The rover will orbit around Mars, then "land on it and probe it." 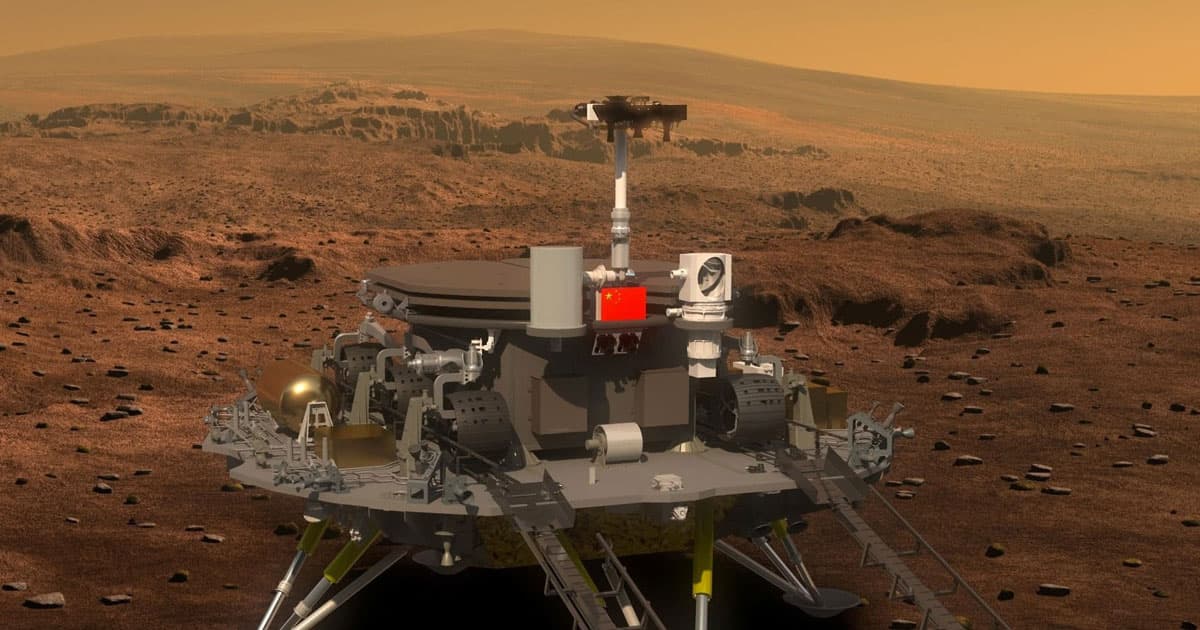 After landing the world's first rover on the far side of the Moon early this year, China already has far more ambitious plans in the works: sending a rover to Mars.

"Over the past 60 years, we've made a lot of achievements, but there is still a large distance from the world space powers," chief designer of China's lunar exploration program Wu Wiren said ahead of the opening of the Chinese People's Political Consultative Conference, CNN reports. "Next year, we will launch a Mars probe, which will orbit around the Mars, land on it and probe it."

China's space program has rapidly picked up pace. Its Yutu 1 rover landed on the Moon in 2013. A second rover landed on the far side some six years later, and a third rover will follow at the end of this year, with the goal of returning to Earth with at least four pounds of lunar soil and rock samples.

But increasingly, China's space agency has been focusing its efforts on the Red Planet. This weekend, China opened its first Mars simulation base in Qinghai Province at a location known to have similarities to the Martian surface. The base can house 60 people in its futuristic capsules.

China won't be the first nation to explore Mars. NASA, for one, has a considerable head start: Its Jet Propulsion Lab has so far sent four remotely operated rovers to the Martian surface to look for signs of life gather scientific data about the distant world.

Both NASA and the European Space Agency each plan to send new rovers to Mars as soon as next year. But China is making a substantial effort to catch up.

More on Martian rovers: NASA is Finally Ready to Say Goodbye to its Opportunity Rover

Read This Next
Shoo
Scientists Warn Giant Asteroid Is Actually Swarm, Nearly Impossible to Destroy
A Sip of Opal
NASA Discovers Precious Gemstones on Mars
And He Scores
We Are Completely Puzzled by This Video of a Chinese Astronaut Playing Ping-Pong in Space
Moon Wrestling
The Head of NASA Is Scared Chinese Astronauts Will Seize Portions of the Moon
Shot Well
Head of NASA Relieved to Hear Elon Musk Isn't REALLY Running SpaceX
More on Off World
Lonely Planet
4:20 PM on futurism
Scientists Find Nearby Planet the Same Size of Earth, Plan to Search It for Life
Take Cover
Yesterday on the byte
Space Startup Blows Up Another Giant Inflatable Space Station Module
Rock Blast
Yesterday on the byte
Scientists Say There's an Upside to Those Rocks That Keep Bludgeoning the James Webb
READ MORE STORIES ABOUT / Off World
Keep up.
Subscribe to our daily newsletter to keep in touch with the subjects shaping our future.
+Social+Newsletter
TopicsAbout UsContact Us
Copyright ©, Camden Media Inc All Rights Reserved. See our User Agreement, Privacy Policy and Data Use Policy. The material on this site may not be reproduced, distributed, transmitted, cached or otherwise used, except with prior written permission of Futurism. Articles may contain affiliate links which enable us to share in the revenue of any purchases made.
Fonts by Typekit and Monotype.