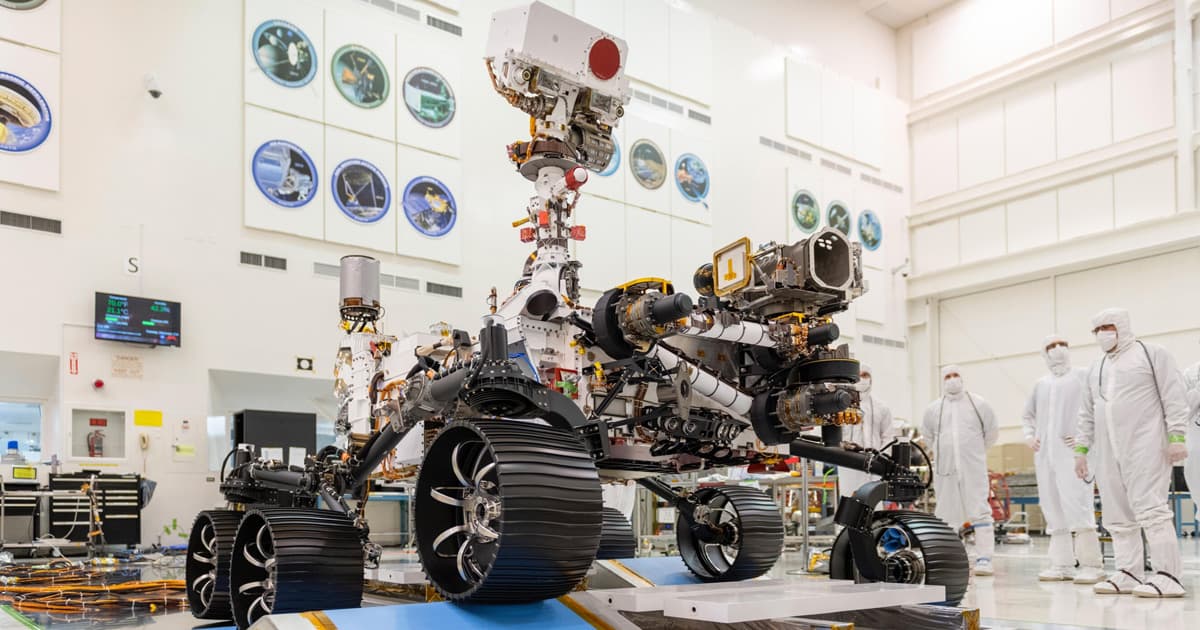 NASA's Mars 2020 rover just went on its first joyride, navigating over small ramps and rolling forward and backward inside a clean room at NASA's Jet Propulsion Lab (JPL) in California — and it's now ready for the Red Planet.

"Mars 2020 has earned its driver's license," lead mobility systems engineer for Mars 2020 Rich Rieber said in a statement. "The test unambiguously proved that the rover can operate under its own weight and demonstrated many of the autonomous-navigation functions for the first time. This is a major milestone for Mars 2020."

"A rover needs to rove, and Mars 2020 did that yesterday," John McNamee, Mars 2020 project manager, added. "We can't wait to put some red Martian dirt under its wheels."

Mars 2020 is a lot quicker on its feet than NASA's previous rovers in terms of decision-making and navigation. Its cameras and image-processing computer are also far more sophisticated and higher-resolution.

Thanks to the tech upgrade, Mars 2020 will be able to move an average of 200 meters (650 feet) per Martian day — impressive considering the previous single-day record, set by NASA's Opportunity rover, was 214 meters (702 feet), according to JPL.

Mars 2020's wheels are also more durable than those of past rovers — especially important considering NASA's Mars Curiosity Rover's wheels were found to be riddled with holes earlier this year after taking a beating from Martian rocks.

The rover is set to take off next summer to arrive at the Red Planet on February 18, 2021. Its main goal will be to look for signs of past microbial life, as well as collect rock samples to bring back to Earth.

Earlier this month, NASA showed off its Space Launch System, the rocket that will hopefully carry the rover to the Red Planet next year — and Mars 2020 won't be making the journey alone, either.

The rover will carry with it a tiny autonomous helicopter that will help it explore the Martian environment. The drone could also help look for ideal future landing zones — and perhaps even search for signs of life.

More on Mars 2020: NASA Installs Autonomous Mini-Helicopter on Its Next Mars Rover

Read This Next
Alt Propulsion
NASA, DARPA, MIT Scientists Met to Discuss "Anti-Gravity" Tech
The Other Left!
A Guy Who Drives NASA's Mars Rover Is Dishing About the Experience
Digging a Mole
NASA’s Mars Mole is Officially “Dug In”
A New Perspective
NASA's Mars Helicopter Could Revolutionize Off-Planet Exploration
Hammer Time
Crap: NASA's Mars "Mole" Finally Started Digging, Then Hit Another Obstacle
More on Robots & Machines
Blow Up Doll
Monday on the byte
Ukraine Accuses Russia of Using Inflatable "Dummy Tanks," Which Deflated
From the Dept. of...
Monday on futurism
The Best UPS Battery Backups of 2023
FROM THE DEPT. OF...
Jan 29 on futurism
The Best Netgear Routers of 2023
READ MORE STORIES ABOUT / Robots & Machines
Keep up.
Subscribe to our daily newsletter to keep in touch with the subjects shaping our future.
+Social+Newsletter
TopicsAbout UsContact Us
Copyright ©, Camden Media Inc All Rights Reserved. See our User Agreement, Privacy Policy and Data Use Policy. The material on this site may not be reproduced, distributed, transmitted, cached or otherwise used, except with prior written permission of Futurism. Articles may contain affiliate links which enable us to share in the revenue of any purchases made.
Fonts by Typekit and Monotype.